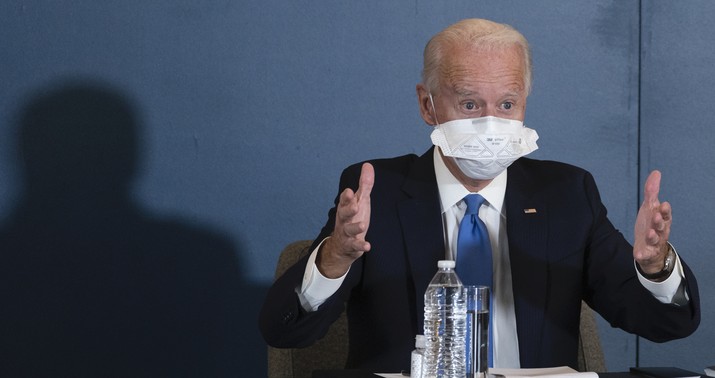 Suddenly, it no longer looks as though Joe Biden’s biggest problem sits across the aisle. Why would the new president hint at bailing on the Left’s cornerstone social-justice issue just two weeks after taking office, and hours after winning the reconciliation battle? The Associated Press reports that Biden all but conceded that the minimum-wage hike to $15 would not survive as an element in his $1.9 trillion COVID-19 package:

President Joe Biden laid out his case Friday for moving fast to pass $1.9 trillion in coronavirus relief, but even as he opened the door to proceeding without Republicans, he conceded that a key element of his plan — hiking the minimum wage to $15 per hour — was unlikely to become law. …

Biden’s speech solidified a marked shift in tone and strategy for a president who entered the White House pledging bipartisanship and met on Monday with 10 Republican senators pushing a slimmed-down $618 billion alternative. Biden concluded in his Friday speech that aid at that level would only prolong the economic pain.

Still, the president acknowledged Friday that one of his most ambitious proposals, raising the minimum wage, would likely be left out of the final bill.

“I put it in, but I don’t think it’s going to survive,” Biden said in an interview with “CBS Evening News” anchor Norah O’Donnell, adding he would push to raise it in a standalone bill. “No one should work 40 hours a week and live below the poverty wage. And if you’re making less than $15 an hour, you’re living below the poverty wage.”

This is the same nonsense, static argument that utterly ignores decades of mandated floor-wage hikes. Every time, the promise made by its advocates is to pull full-time workers above the poverty line. And every time, the inflationary impact of raising labor prices without associated increases in value ends up pushing that floor below the poverty line too, and usually not all that long afterward. The real way to lift people above the poverty line is to increase the value of labor and have price meet it organically by encouraging capital investment, which creates jobs, which then puts pressure on employers to bid for labor. It was that pressure that led to the first significant real growth in wages in more than a decade in 2017-19.

At any rate, reconciliation would likely give Biden his only opportunity to pass such a bill. So why back away now, after winning the reconciliation process for his stimulus/relief bill? Because, as Politico reported earlier in the week, Biden can’t even get all of his fellow Democrats to line up behind it. The poison pill for Republicans turned out to make at least a few of Biden’s allies a bit queasy, too:

Democrats’ first obstacle: The plan to include it in their $1.9 trillion relief bill could fall afoul of Senate rules. But the bigger problem could be the Democratic caucus itself, where it’s not clear the package has the unanimous support of 50 Senate Democrats that it needs to become law.

“The real issue is does it get votes. Could we do it?” said Sen. Tim Kaine (D-Va.), who supports raising the minimum wage to $15 an hour. “We have Democratic members who have concerns about it and so you wouldn’t want to put something in a reconciliation bill that would then cause it to not get the votes to move forward.”

Sen. Joe Manchin (D-W.Va.) has said he opposes a $15 minimum hourly wage, Sen. Jon Tester (D-Mont.) said he’d like to see changes made and several other Democrats have been noncommittal.

The lack of support within the Democratic caucus became clear during the vote-a-rama in Thursday’s overnight session. Sen. Joni Ernst (R-IA) offered an amendment to block any minimum-wage increase from consideration during the pandemic, and the New York Times reported that Democrats appeared to throw in the towel pretty easily:

The measure passed by a voice vote, signaling that Democrats were not attempting to defeat it. Mr. Biden’s stimulus package would increase the wage to $15 per hour by 2025, and Senator Bernie Sanders, independent of Vermont, who has been leading the push for the wage increase in the Senate, said he would not contest Ms. Ernst’s effort because he had never sought to raise it during the pandemic.

But the vote was a signal that the wage increase could be difficult to pass in an evenly split Senate, where at least one Democrat, Senator Joe Manchin III of West Virginia, is on record opposing it.

In other words, Biden doesn’t need glasses to read the writing on the wall. If he tries to force the “fight for $15” into his stimulus bill, Biden and Chuck Schumer risk an embarrassing defeat in the first few weeks of the administration, and on its featured legislative effort. This is a case of being hoist by one’s own petard, too; had Biden left it out of the bill, he might have gained more Republican support — or at least more concessions in exchange for its removal. Now it looks like Biden’s retreating out of weakness rather than superior negotiation skills.

That brings up yet another problem on Biden’s left flank. This is no mere tertiary item on a hobby-horse list for progressives — the “fight for $15” is a core part of their philosophical agenda. This will stoke anger among activists, who will take it out on Chuck Schumer for not going hardline on the filibuster and on Manchin, Sinema, Mark Kelly, and others who aren’t fully on board with the Left’s agenda. Progressives are already threatening to primary Democrats out the majority by 2023, and this betrayal by Biden at least theoretically might accelerate that process into 2021.

Biden and Schumer have been around long enough to know better than to make this kind of mistake, too. Politics is all about setting expectations … and plausible deniability when things go wrong. They shouldn’t have set this expectation without first confirming they had 50 votes on their own side to support it. This is amateur hour on the part of Democratic leadership.