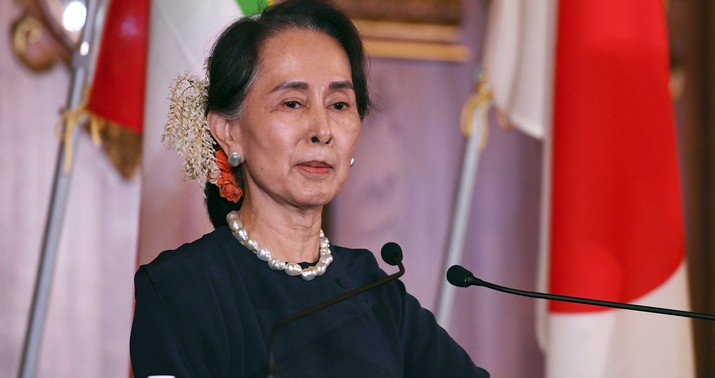 The new Biden administration has its first new legitimate foreign-policy crisis, and it comes from a surprising place. Following several days of rumors, the military in Myanmar (formerly known as Burma) has seized power from the civilian government run by Nobel Peace Prize recipient Aung San Suu Kyi. The same generals with whom she had an uneasy alliance declared a national emergency after an election which they claimed was rife with fraud.

A few years ago, Suu Kyi would have had enough international standing to instantly make her a cause celebre in capitals around the world. These days, however, she might find that her calls get answered with less enthusiasm:

Myanmar’s military staged a coup Monday and detained senior politicians including Nobel laureate Aung San Suu Kyi — a sharp reversal of the significant, if uneven, progress toward democracy the Southeast Asian nation has made following five decades of military rule.

An announcement read on military-owned Myawaddy TV said the military would take control of the country for one year. It said the seizure was necessary because the government had not acted on the military’s claims of fraud in November’s elections — in which Suu Kyi’s ruling party won a majority of the parliamentary seats up for grabs — and because it allowed the election to go ahead despite the coronavirus pandemic.

The takeover came the morning the country’s new parliamentary session was to begin and follows days of concern that the military was plotting a coup. The military maintains its actions are legally justified — citing a section of the constitution it drafted that allows it to take control in times of national emergency — though Suu Kyi’s party spokesman as well as many international observers have said it amounts to a coup.

If this sounds a bit familiar to Americans, it does have a few parallels to the last few weeks here. At one point, rumors swirled that Donald Trump had entertained the use of the military to stop the post-election process in several states over his claims of election fraud via the Insurrection Act. Those rumors got serious enough to prompt ten former secretaries of defense from both Democrat and Republican administrations to pen an op-ed warning the military from interfering. That was two days before the Capitol riot and insurrection derailed the Electoral College vote count and delayed the ceremonial end of the election process.

The difference in Myanmar is that the military operates as a separate political power, and that they have never been terribly shy in using it. Suu Kyi finally marshaled enough international pressure to force the military to hand her the office she won by election years ago with a relentless campaign of non-violent civil disobedience, for which she received the Nobel prize. However, Suu Kyi has had to share power with the military under the omnipresent threat of a coup. That is why Suu Kyi backed the military’s genocidal campaign against the Rohingya Muslims, which shocked her international supporters.

The Los Angeles Times’ Shashank Bengali reminds readers that lying down with dogs means getting up with fleas:

With her arrest Monday in a military coup in Myanmar, Aung San Suu Kyi’s dizzying journey on the world stage — from democracy icon to leader of an elected government and then, astonishingly, a stalwart defender of the slaughter of Rohingya Muslims — returned to a familiar place.

The 75-year-old is a political prisoner again, detained along with dozens of allies and political leaders as the army retook power barely five years after elections that ended a half-century of military rule. …

After the junta agreed to some reforms, she became Myanmar’s nominal leader in 2015 and heads a political party that has won two consecutive landslide victories in parliamentary elections, most recently in November. But she shared power in a delicate and not always discernible dance with her former jailers in the army, which kept control over security affairs and veto power over constitutional changes.

The arrangement boosted Suu Kyi’s popularity at home as one of Asia’s poorest economies began to open up. But her refusal to criticize the army made her a global disgrace when she defended the 2017 military-led offensive that drove hundreds of thousands of Rohingya from their homes.

To her detractors, the coup is the inevitable result of the Faustian bargain she struck with the army for political gain, a deal whose limits are now crushingly clear: The generals were never more than one step away from seizing power again.

Indeed. Suu Kyi knew this full well, even if many outsiders may not have realized it at the time. The military never did concede much other than day-to-day control over the bureaucratic functions of government and Suu Kyi’s role as its public face. It might have been too much to call Suu Kyi a puppet — she has her own power base as well — but the military’s independent power made Suu Kyi a junior partner at best in governance. The “Faustian bargain” probably made Suu Kyi more a collaborator than junior partner, especially in regard to the Rohingya fiasco.

Now Suu Kyi hopes to get the democracy gang back together. The last six years will make that a tougher goal than she might think, both at home and abroad:

Aung San Suu Kyi, the leader of Myanmar’s civilian government, urged people across the country to rise up and oppose a military takeover that saw the army take control of the country Monday. …

“I urge people not to accept this, to respond and wholeheartedly to protest against the coup by the military,” according to a statement that carried Suu Kyi’s name but not her signature. “Only the people are important.”

A handwritten note at the bottom of the statement posted to Facebook by Suu Kyi’s National League for Democracy party, or NLD, said it was written before Monday in anticipation of the army’s seizure of power.

Before 2015, Suu Kyi was a pure symbol of democracy against military juntas. Having collaborated with the military in a genocide, it seems unlikely that the people at home or her previous allies abroad will ever see her in that light again.

So where does that leave the incoming Biden administration? That will be a very interesting question. Had Trump been re-elected, he might have professed sympathy with the military’s stolen-election argument. Joe Biden and his team will no doubt protest the coup (as they should), but embracing Suu Kyi won’t be nearly as easy as it was during the Obama-Biden administration. They were already starting to work on the question of formally declaring the ethnic-cleansing operation against the Rohingya a genocide:

The incoming Biden administration is reportedly planning to launch an interagency review to determine whether Myanmar’s fierce persecution of its Muslim Rohingya minority amounts to genocide. The plan was revealed by incoming Secretary of State Antony Blinken during his confirmation hearing before the Senate Foreign Relations Committee earlier this week, during which he said that if confirmed, he would oversee the review process.

The review would examine events that have taken place since August 2017, when the Myanmar army, or Tatmadaw, launched a brutal “clearance operation” in Rakhine State in the west of the country. Justified as a response to scattered attacks by Rohingya militants, the offensive saw soldiers and vigilantes torch villages, shoot civilians, and drive an estimated 750,000 desperate people over the border into Bangladesh.

There is no way that a genocide declaration would have excluded Suu Kyi from condemnation. That leaves Biden in a tough position diplomatically, not just in terms of opposing the coup but also in keeping Myanmar from tipping entirely into China’s orbit.

The best option would be for Suu Kyi to retire and pass the democratic torch to a figure without the collaborationist baggage. Having sold out to keep power already, though, Suu Kyi seems unlikely to step aside now.

The US warned Myanmar after its military staged a coup on Monday that it would “take action” unless the “rule of law” is not restored and detainees, including Nobel prize winner Aung San Suu Kyi and senior political leaders of the Southeast Asian nation, are released. …

“We continue to affirm our strong support for Burma’s democratic institutions and, in coordination with our regional partners, urge the military and all other parties to adhere to democratic norms and the rule of law, and to release those detained today,” the statement released by White House press secretary Jen Psaki said.

“The United States opposes any attempt to alter the outcome of recent elections or impede Myanmar’s democratic transition, and will take action against those responsible if these steps are not reversed,” it continued, adding that the US will continue to monitor the situation.

Secretary of State Antony Blinken in a statement called for the release of government officials and “respect the will of the people of Burma as expressed in democratic elections on November 8.”

Note the interesting use of both Burma and Myanmar in these official statements. The “actions” being contemplated are no doubt also as calculated to keeping options open. There is zero chance of a military intervention, especially so close to China. The actions will likely be diplomatic and economic — sanctions on junta officials and locking them out of the US banking system for starters. Would those have any impact? Not if China backstops the junta, and they probably already have arranged to do so. That would force the Biden administration to confront its China problem ASAP, which might not be a bad outcome.