Luttig: The clock runs out on an impeachment trial on January 20 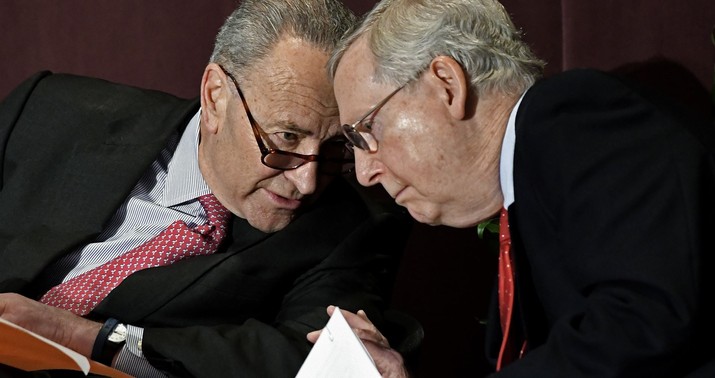 Does it? Former federal appellate judge J. Michael Luttig made that case to Byron York earlier in the day. By the evening, Judge Luttig had decided to lay out his case more thoughtfully in the pages of the Washington Post. The judge, who had been on Supreme Court short lists during the George W. Bush administration, argues that the Constitution only specifies impeachment and removal for active federal officers.

Does the lack of inclusion make for an exclusion, however? That case isn’t quite as certain, as even Luttig grudgingly allows, and certain precedents might argue against it:

The sequencing of the House impeachment proceedings before Trump’s departure from office and the inauguration of the new president, followed by a Senate impeachment trial, perhaps months later, raises the question of whether a former president can be impeached after he leaves office.

The Constitution itself answers this question clearly: No, he cannot be. Once Trump’s term ends on Jan. 20, Congress loses its constitutional authority to continue impeachment proceedings against him — even if the House has already approved articles of impeachment.

Therefore, if the House of Representatives were to impeach the president before he leaves office, the Senate could not thereafter convict the former president and disqualify him under the Constitution from future public office.

After a read through the Constitution, however, one realizes that it in fact does not answer this question, clearly or otherwise. It doesn’t speak to impeachment trials for former civil officers at all. Luttig cites two sources for this argument, but neither addresses the issue Luttig claims they answer.

First in sequence is Article I, Section 3, which lays out the Senate’s authority to try impeachments. The language, while limiting the punishments available to the Senate, doesn’t exactly appear to limit the jurisdiction:

The Senate shall have the sole Power to try all Impeachments. When sitting for that Purpose, they shall be on Oath or Affirmation. When the President of the United States is tried, the Chief Justice shall preside: And no Person shall be convicted without the Concurrence of two thirds of the Members present.

Judgment in Cases of Impeachment shall not extend further than to removal from Office, and disqualification to hold and enjoy any Office of honor, Trust or Profit under the United States: but the Party convicted shall nevertheless be liable and subject to Indictment, Trial, Judgment and Punishment, according to Law.

“Removal from office” suggests that the impeached should be an active federal officer; the word and in connecting disqualification might also imply the same, although that’s debatable. Perhaps more substantively, Luttig cites Article II Section 4, which lays out precisely who Congress can impeach in the first place:

The President, Vice President and all civil Officers of the United States, shall be removed from Office on Impeachment for, and Conviction of, Treason, Bribery, or other high Crimes and Misdemeanors.

Again, that might imply that Congress can only impeach civil officers that remain in their offices, for the purposes of removal. Luttig, however, argues that the Constitution’s language is exclusionary to anyone not in office, even though at least one of the penalties could still be applied. That certainly is a defensible position, but it’s not explicitly written in that fashion.

Luttig fairly notes that his argument runs into two problems — two previous cases in which Congress in fact did hold impeachment trials for former federal officials. One, however, involved a former senator (William Blount in 1797), which probably should have been handled as an ex post facto expulsion rather than an impeachment. As precedent, it has the baggage of the clearly improper action by the House of impeaching a member of the upper chamber; today, any such move would be blocked as an improper encroachment on Senate authority, and rightly so. There’s little to no chance that a court would consider this a precedent for an impeachment trial for a former executive-branch official.

The impeachment of Secretary of War William Belknap for corruption in 1876 seems more on point. After his corruption got exposed, the House moved to impeach Belknap, but Belknap resigned immediately in an attempt to avoid the scandal. Nonetheless, the House impeached Belknap anyway, and the Senate held a trial. Belknap assented to the Senate’s authority in the matter even though he had already left office; perhaps that is why the Senate fell short of the necessary two-thirds to convict him. It’s clear that the Senate didn’t fail to do so over a question of authority, however.

Still, there are a couple of problems with this as a precedent too. It’s clear that Belknap’s abrupt resignation was intended to thwart Congress, whereas Trump’s departure on January 20 will be the statutory consequence of the end of his term. Belknap never challenged Congress’ authority in court either, and since the Senate ultimately failed to convict him, there wasn’t anything to appeal. It’s only precedent in the historical sense, not the legal sense, but it’s still not easy to dismiss. It seems pretty clear that Congress has at times considered its authority to extend over former federal officials, if for no other reason than disqualification from further positions of trust in the federal government.

This could still be moot if impeachment and a trial comes before January 20. On Friday, Mitch McConnell relied on normal order to point out that the earliest the Senate could start a trial would be one hour after Joe Biden took office, unless there was unanimous consent to open the Senate to new business. Since then, Chuck Schumer has apparently considered using a little-known authority to open the Senate for emergency business, but that would require McConnell to consent to the move. If McConnell has decided to act against Trump, as Allahpundit noted has become a strong possibility, then a trial could open within a few days. That would give the Senate enough time to end Trump’s term and to ensure his disqualification for later office.

That’s still a big if, though, and until then Luttig has a defensible argument. That becomes especially true if, as James Clyburn suggested, a trial might get put off for months. Even the Belknap precedent, such as it is, couldn’t justify that demonstrated lack of urgency. The Supreme Court might worry that such a move would create an open season for ex post facto impeachments and disqualifications for past presidents and other federal officials. Where would that end? Shall we disqualify Millard Fillmore at some point? Well … maybe that’s not the best example …

Dershowitz: There's One Big Reason I Won't Be on Trump's Impeachment Team