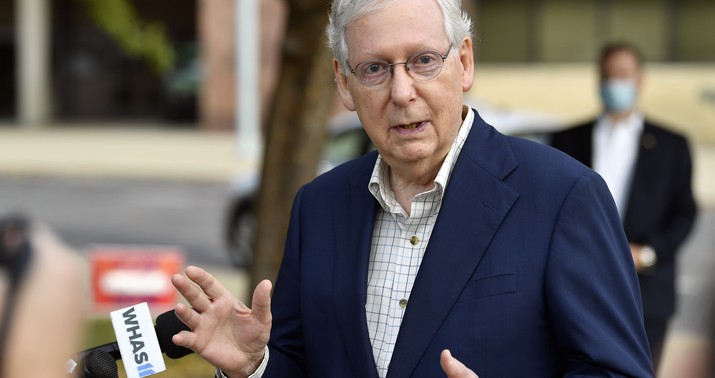 I’m reading this story as a sort of “soft” and public way to whip votes among the Senate GOP for removing Trump. Maybe McConnell is unwilling to whip votes privately, believing that it would split the party even further for the leader of the caucus to be seen as trying to remove a president from his own side. Presumably McConnell will take the same position as Liz Cheney in the House, telling members to vote their conscience.

But letting it be known that he’s “pleased” to see Pelosi moving ahead is an obvious signal of what his own position is and that there’ll be no repercussions for Republican senators who vote to convict.

Senator Mitch McConnell, the Republican leader, has told associates he believes President Trump committed impeachable offenses and that he is pleased that Democrats are moving to impeach him, believing that it will make it easier to purge him from the party, according to people familiar with his thinking. The House is voting Wednesday to formally charge Mr. Trump with inciting violence against the country…

Mr. McConnell, Republican of Kentucky has indicated he wants to see the specific article of impeachment that the House is set to approve on Wednesday, which is expected to draw support from as many as a dozen Republicans, potentially including Representative Liz Cheney of Wyoming, the party’s No. 3 in the House. But he has made clear in private discussions that he believes now is the moment to move on the weakened lame duck, whom he blames for Republicans losing the Senate.

On Monday, President-elect Biden telephoned Mr. McConnell to ask whether it was possible to set up a dual track that would allow the Senate to confirm Mr. Biden’s cabinet nominees and hold a Senate trial at the same time, according to officials briefed on the conversation who disclosed it on condition of anonymity. Far from avoiding the topic of impeaching Mr. Trump, Mr. McConnell said it was a question for the Senate parliamentarian, and promised Mr. Biden a quick answer.

The same article claims that even Trump loyalist Kevin McCarthy is reportedly asking colleagues whether he should call on Trump to resign. That may be McCarthy’s way of turning down the political heat that’s on him for not denouncing the effort to block certification in Congress the way McConnell did. But I wonder if both he and Cocaine Mitch were moved by the hair-raising security briefings that Congress has gotten over the last 24 hours suggesting that Inauguration Day could be a horrendous bloodbath in Washington, with National Guardsmen forced to defend the Capitol from crazed armed Trump diehards. There’s a simple political calculation here ultimately: Is the current situation likely to get worse or better? Was the assault on the Capitol the lowlight of the dead-end MAGA resistance or just the start of some terrorist campaign? If you think it’s the start then the logical move politically is to distance yourself from Trump as much as you can as quickly as you can. Even if he doesn’t end up egging on the violence, blame for it will be laid right at the president’s feet after months of “stop the steal” propaganda.

I don’t think this is all calculation for McConnell. The impassioned speech he gave last Wednesday against blocking Biden’s certification is evidence enough that he thought this had gone too far even before the mob descended. Remember too that McConnell is an institutionalist whose great career ambition was to lead the Senate. To see his institution overrun by a mob incited by a populist demagogue whom he’s never had any real use for must have grieved him, quite apart from the risk it created to the safety of him and his colleagues.

And you know what else? On a basic, basic human level, he and other Republicans must have ferociously resented being bullied by Trump. Most of these people came up the political ranks learning to be team players and party soldiers, and by the end they had a president from their own party threatening to primary any of them who didn’t support his coup attempt. Trump took to openly recruiting a primary challenger for McConnell’s number two, John Thune, on Twitter after Thune politely pointed out that there weren’t remotely enough votes in the Senate to block certification of Biden’s win. And now suddenly the Capitol riot has smashed Trump’s long-term viability as Republican leader, and his habit of making things worse will probably lead him to damage it further with more irresponsible rhetoric.

You don’t think McConnell’s relishing that opportunity to punch the bully back for once? Just as a matter of basic manhood?

Yesterday I would have guessed that maybe five Republicans in the Senate would vote to remove: Romney, Murkowski, Collins, Toomey, Sasse. With McConnell now signaling support, I’m not sure how high this might go. Cocaine Mitch could be dialing people up behind the scenes, not to whip them but to lobby them: “We’ll never have a better opportunity to put this guy behind us. We can reestablish some moral credibility by repudiating him. It’ll hurt us in 2022 but it’ll be worth it in 2024 as voters’ memories fade. Besides, even if we don’t remove him, Trump is finished electorally after this. There’s no sense clinging to him as an insurrectionist movement metastasizes around him.” Could he actually deliver 17 votes for Schumer with that pitch?

I don’t know. I wouldn’t say “hell no” now, as I would have yesterday. Needless to say, though, if McConnell really is “pleased” about the impeachment effort, he has to vote himself to remove. He’s not going to “purge” Trump from the party by running interference for him at the eventual Senate trial. If he wants a divorce between Trump and the GOP establishment, that’s the moment to finalize it, with a yes vote.

And also needless to say, we’re headed for a true party schism now between diehard Trump loyalists and everyone else. I assume McConnell has concluded that there’s no way to hold the GOP together uneasily at this point, as happened in November. The divisions over Trump’s influence on the country are too deep. Republicans may need to accept a beating in the midterms as Trump voters turn on pro-impeachment incumbents in order to move past this era. But if that beating is coming anyway, per Trump threatening Thune, why not embrace it and do the right thing?

Exit question: If Kelly Loeffler and David Perdue had won the Georgia runoffs, ensuring McConnell’s continued hold on power in the Senate and “proving” that Trump was still an electoral asset to the GOP, would he be “pleased” about impeachment? Or would he have resigned himself to the idea that sticking with Trump is the only way to win?

A Senate Republican aide tells me he thinks there were about 20, give or take, Republicans who were *open* to a conviction

Before our story on McConnell

"If Mitch is a yes, he's done," said one Senate Republican who asked to be named. Many Rs are staying mum https://t.co/JOOmuKwhNc