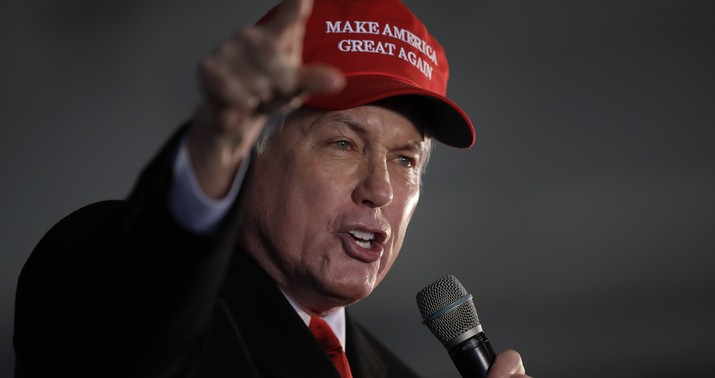 Just remember that this attorney, who worked on behalf of Donald Trump, kept holding rallies all through the runoffs in Georgia. Having Lin Wood as a thought leader in the state just as people had to decide which party should control the Senate worked out well, huh?

Today, Wood sets his sights a bit higher than the Senate. Now he wants the Vice President arrested for treason. Along with a few others, by the way (via Twitchy):

2. Rod Rosenstein @RodRosenstein must be arrested & charged with being accessory to murder & TREASON.

Rosenstein’s an accessory to murder? And what has Pence done to warrant a treason charge? At least, so far this morning? It’s curious why Wood would want Pence arrested before Congress meets today, if as Trump says he and Pence are in “total agreement” on the process. Hmmmm.

As my pal Cam Edwards quipped, this list seems incomplete. Where’s “pick up the dry cleaning,” for instance? Even Wood found it necessary to amend it by demanding Trump take action immediately:

Our President @realDonaldTrump must today fulfill his sworn oath to preserve, protect, & defend the Constitution of the United States & We The People. https://t.co/gcI5l60yRk

Needless to say, this is just flat-out insane. Entertaining, perhaps, but pure nuttiness. The question is how much Wood’s insanity impacted the runoffs in Georgia, and the answer could be by a non-zero amount. At least at first blush, it seems that the Trump vote from the November election dropped off more than the Biden vote did — perhaps as a result of Wood’s boycott calls, if not Donald Trump’s repeated attacks on Georgia’s voting system:

Both sides turned out, but it’s the boosted Democratic turnout that is really eye-popping in a runoff. It’s the first time that has happened in Georgia. Could that be because Trump made himself the issue — and just as in the general election, helped fuel opposition turnout by doing so?

For his part, Wood disclaims any blame for what happened in Georgia, and apparently has amnesia about his boycott call to boot. When confronted with the runoff results, Wood responded with a YMMV:

I tried to warn citizens of GA. I urged that 11/3 election fraud be exposed & the Senate runoff be delayed. Now the theft of an election has been repeated.

Who is to blame? Those who perpetrated a fraud on We The People or those who urged the fraud be exposed? You decide. https://t.co/hX0DCX7xYP

“Theft of an election” that Wood demanded be boycotted by one side?

For those who complain about the attention given to Wood, let’s not forget that Trump chose to put Wood in his legal inner circle, along with Sidney Powell, who also campaigned for a boycott of the runoff elections in Georgia. Trump later distanced himself a bit from both Wood and Powell, but not from the conspiracy theories both were espousing about the election. Trump continues to echo their arguments to this day, as well as their calls to overturn election results in a desperate attempt to remain in power. That is Trump’s choice, and Wood’s rants reflect on Trump’s judgment over the past two months.

There is a price to be paid for crazy. Republicans got the bill for it last night, and they’d better hope that it wasn’t just a down payment.

Also … has anyone seen Lin Wood and Louise Mensch in the same place and time? https://t.co/oipng397vi

'Sexist jerk': We eagerly await Rep. AOC's lecture to Stephen King on why this tweet is not okay