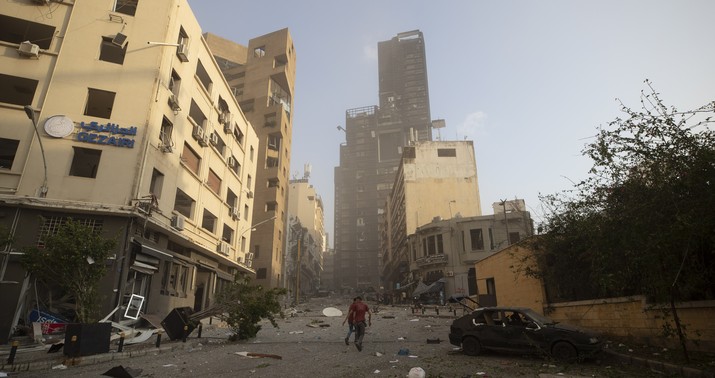 Did Beirut port officials’ negligence set the stage for the worst devastation Lebanon has seen since the end of its civil war thirty years ago? In the immediate aftermath of the explosion, fingers pointed everywhere as people theorized that it was a deliberate attack — and suspected Israel of settling scores with Hezbollah, which reportedly uses the port as a distribution point for missiles. However, Lebanon’s government has arrested port officials after concluding that their negligence in handling large amounts of ammonium nitrate created the conditions for the devastation:

The Lebanese government says it is putting an unspecified number of Beirut port officials under house arrest pending an investigation into how 2,750 tons of ammonium nitrate came to be stored at the port for years.

The move comes amid speculation that negligence was to blame for the explosion that killed more than 100 people.

It was announced following a Cabinet meeting Wednesday during which the government declared a two-week “state of emergency,” effectively giving the military full powers during this time.

The storage began six years ago, after offloading the material from an “ailing” Russian-owned cargo ship, the New York Times reports this morning. However, the general manager of the Beirut port told a local news station that they have repeatedly petitioned to have the ammonium nitrate removed from the dock. It’s the government that failed to act, Hassan Koraytem insisted:

Lebanese customs officials wrote letters to the courts at least six times from 2014 to 2017, seeking guidance on how to dispose of the highly combustible material, according to public records cited by a Lebanese lawmaker, Salim Aoun.

Solutions proposed by the officials included exporting the ammonium nitrate from Lebanon or donating it to the Lebanese Army. But the judiciary failed to respond to the letters, the records suggested.

The general manager of Beirut port, Hassan Koraytem, appeared to confirm that account on Wednesday in an interview with OTV, a local broadcaster. Despite numerous requests to have the material moved, “nothing happened,” Mr. Koraytem said.

“We have been waiting for this to be resolved for six years, in vain,” he said.

Perhaps it should be port officials arresting politicians instead? That might actually be the popular option, al-Jazeera suggests:

Lebanon’s Prime Minister Hassan Diab on Tuesday declared the explosion at the port a “great national disaster” and promised that “all those responsible for this catastrophe will pay the price”.

Lebanese President Michel Aoun called the failure to deal with the ammonium nitrate “unacceptable” and vowed the “harshest punishment” for those responsible. An investigation has now been launched, and the committee is to refer its findings to the judiciary within five days.

The cause of the explosion is still not clear, but many Lebanese were quick to point out what they believe to be the root causes; immense mismanagement in a broken state run by a corrupt political class who they say treat the country’s inhabitants with contempt.

It is also not lost on Beirut’s residents that this tragedy emanated from the city’s port, a public utility known locally as the “Cave of Ali Baba and the 40 Thieves” for the vast amount of state funds that have reportedly been stolen there over the decades.

The allegations include claims that billions of dollars in tax revenue never reached the state treasury due to schemes to undervalue imports, as well as accusations of systematic and widespread bribery to avoid paying customs taxes.

In other words, the mass arrest of port officials might just be a distraction from where the blame really lies. Although, this history doesn’t address one other point — why did port officials allow fireworks to be stored so close to the obviously dangerous ammonium nitrate storage area? That seems like a negligent decision too, if that’s what happened. That one might be on the port officials themselves.

Hopefully the residents of Beirut will get real answers to all of these questions. It’s remarkable, however, that in all of the apparent blame-shifting and distraction, the usual scapegoat in such events isn’t getting pulled into the debate. Perhaps it’s because there may be visual evidence that the entire chain of events was an industrial accident that cascaded into catastrophe, as the Times of Israel reports:

A picture posted online late Tuesday of unknown provenance appeared to show workers welding a warehouse door next to stacks of 1/2-ton bags of ammonium nitrate.

The door and windows on the warehouse appeared to match pictures and videos of the warehouse where the explosion occurred, shortly after a fire blamed on fireworks sent a large cloud of smoke over Beirut’s downtown.

At least one worker in the picture is wearing a cloth facemask, pointing to it having been taken recently. The authenticity of the picture could not be independently confirmed.

A spark from a welding tool would not be able to cause the nitrate to explode, but it could ignite other materials and raise temperatures high enough to be able to set off a massive explosion.

A spark could set off fireworks, however, and a blaze in a fireworks storage area would burn hot enough to set off the ammonium nitrate. Lebanon’s government hasn’t confirmed the picture or the sequence of events, but that may be why no one’s pointing the finger at Israel … as we’d normally expect, and as people speculated yesterday.