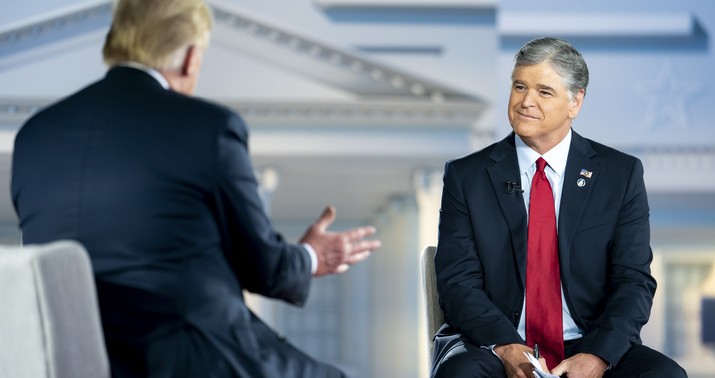 The twisted irony of this result is that some segment of Trumpers now trust Fox less because Fox told them the truth. They famously called Arizona for Biden on election night — prematurely, but ultimately correct. They projected Biden the winner of the election a few days later. They’ve been a little more grounded in reality than their “competitors,” Newsmax and OAN, have been.

Emphasis on “a little.”

Yesterday I guesstimated based on the most recent polling data that the Republican Party is now a 50/30/20 proposition. Fifty percent are hardcore MAGA, to the point where they’re more loyal to Trump than to the party. Another 30 percent are pro-Trump but a bit more ambivalent about having to choose between him and the GOP. The last 20 percent are the Trump-skeptics, a rump but a sizable enough one that they can make mischief for the right in elections if they don’t stay onside. When it comes to righty cable news, though, the proportions may be different. Fifty (or rather 40) percent or so of Trump voters list some non-right news source as their most trusted; another 35-ish percent list Fox; and another quarter or do are diehard Trumpers who need the pure, uncut stuff from upstarts like Newsmax and OAN.

How that squares with the other 50/30/20 breakdown, God only knows. Presumably all of the hardcore MAGA are watching either Fox or its more populist rivals while the other 50 percent are spread out among many alternatives. Whatever the answer, the newsy part here is that Newsmax and OAN *have* made inroads with Trump voters over the past five years in terms of their relative trustworthiness. In 2016, 58 percent of Trump voters listed Fox as their most trusted news source. Today?

Fox News is still, by far, the most trusted news network/media source among previously identified Trump voters from various state and national polls taken in 2020. Among Trump voters, 34% trusted Fox News the most, followed by 17% for Newsmax, 9% for One America News Network, with every other network at 3% or less…

In a similar trend, 58% of Trump voters said that the storming of the Capitol on Jan. 6 was an antifa-inspired attack that only involved a few Trump supporters. Among Fox News viewers it was 59%, but notably less than the 73% who watch OANN and Newsmax. The recent Senate impeachment trial had a doubling down effect for 64% of Newsmax viewers who said the trial made them more supportive of Trump. Among OANN, 49% were more supportive, followed by 41% of Fox viewers…

Then we come to the true test of party loyalty – or should I say disloyalty – when comparing Trump with the Republican Party. We put Trump supporters on the spot and asked to whom they were more loyal. In the survey, 54% said they are more loyal to Trump while 34% chose the Republican Party. Among Fox News Trumpers, the numbers were a slightly more modest 51%-37% split in favor of Trump. But among Newsmax viewers 72% chose Trump over the GOP and among OANN, the Trump loyalty tipped to 80%-15%.

Asked whether they’d prefer a Trump Party to the Republican Party, around two-thirds of Trump fans who watch Newsmax (70 percent) or OAN (65 percent) said the former. Among Trump voters who watch Fox, though, the split was a much narrower 41/28. Which, I suppose, only confirms what we already knew — namely, that the home of Tucker Carlson, Sean Hannity, and Laura Ingraham is actually the “moderate,” establishment right-wing cable news network. The sort of network that has Karl Rove as a contributor. The sort of network you might watch if you’re a soccer mom who’s concerned about cancel culture but maybe not if you’re full QAnon and looking to stage a putsch at the Capitol.

Emphasis on “maybe.” Given how Fox has been scrambling lately to crank out more content from its populist broadcasters to fend off the challenge from Newsmax and OAN, who knows if we won’t eventually see the QAnon Shaman as a guest host on “The Five”?

Is any of this hurting Fox ratings-wise, you ask? Well, yes and no. FNC remains far ahead of its two right-wing rivals but the disaffection among wayward MAGA viewers may be costing the network relative to its two left-wing ones, especially in the key 25-54 demographic:

The Fox & Friends slide is especially notable, as that’s Trump’s favorite show. Maybe it’s a simple matter of fewer Republicans wanting to follow the news since Inauguration Day, now that Biden’s setting policy. But if there is some sort of grand Trumpist defection from Fox happening, we might expect to see an outsized effect on a famously Trumpy news show like F&F.

As for Trump himself, don’t let it escape your notice that he made a point of phoning in to all three right-wing cable-news networks last week to celebrate the life of Rush Limbaugh. Possibly that was done to spite Fox, but maybe not. Maybe it’s a simple matter of Trump understanding that some of his most devoted fans have left for greener, more populist pastures and he wanted to reach them where they live. Exit question: Will we see a “Trump vs. McConnell” divide mirrored in how Newsmax/OAN and Fox cover the 2022 primaries? Given how eager Fox seems to be to reingratiate itself to Trump fans, I’m guessing no. All three networks will be full MAGA.

Update: A reader emails to note that Fox remains number one overall and that CNN has slipped from its post-election highs, which is certainly true. CNN tends to do better during newsy periods, when the casual news consumer has an incentive to follow what’s happening. The first month of the Biden era has been a lot quieter than virtually any period of the Trump era. As the daily news turns more mundane, some of those casual news consumers will dry up and blow away. Although not enough so far to wreck CNN’s standing in the demo.