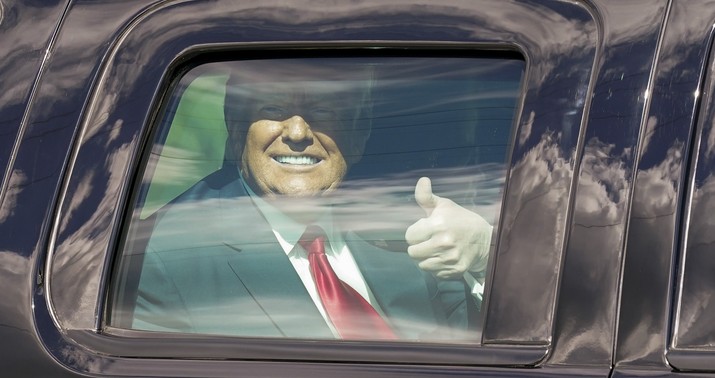 This makes three polls in less than a month establishing the same two key facts about the current Republican Party. One: There are many more Trumpers than there are anti-Trumpers. Two: There are enough anti-Trumpers to make life difficult for the GOP if things stay too Trumpy.

Last month a Rasmussen survey found 49 percent of Republicans thought a new Trump-led party would be better than the Republican Party versus 33 percent who thought it’d be worse. Last week Gallup saw 68 percent of GOPers say they wanted Trump to remain leader of the GOP versus 31 percent who don’t. Today Suffolk has numbers similar to both, again finding that more Republicans would prefer to be led by Trump even if it meant joining another party than would prefer to stay in a Trump-less GOP. But here too, the number of Trump skeptics isn’t negligible; a meaningful share of the party wants to move on from Trumpism and one of the great subplots of the coming midterms is what those voters decide to do about it. Do they stick with the team despite their Trump fatigue, stay home, or cross the aisle and become “Red Dog Democrats”?

Or rather, how many end up in each of those three groups? Because there’ll be some in each, and the percentages matter a lot to who controls the House in 2023.

By double digits, 46%-27%, those surveyed say they would abandon the GOP and join the Trump party if the former president decided to create one. The rest are undecided…

They express stronger loyalty to Trump the person (54%) than they did to the Republican Party that twice nominated him for the White House (34%).

Somewhere between 40 and 50 percent of the party appears to be hardcore MAGA, with 42 percent saying that the recent impeachment trial made them more supportive of Trump. (Just four percent said it made them less so.) And somewhere between 20-30 percent appears to be Trump-skeptical, with eight in 10 Republicans saying they’d be less likely to vote for a Republican candidate who supported impeachment. There are people in the middle too, of course — for instance, 58 percent say they think the Capitol riot was, uh, mostly an Antifa operation whereas 28 percent called it a rally of Trump supporters. As a rule of thumb, we should probably assume going forward that 50 percent of Republicans are Trumpist RINOs, loyal to the former president but not to the party; another 30 percent like Trump but aren’t quite as willing to shed the Republican label; and another 20 percent think it’s time for a new direction.

Can a 50/30/20 party be competitive in elections? It can if the “20” group is motivated mainly by negative partisanship, wanting to keep Democrats out of power at all costs. If and when that changes, the party collapses. Meanwhile, the “50” group that has no use for the party per se obviously can only be kept onside by giving Trump a major role going forward. Once he ceases to identify with the GOP, it collapses even more catastrophically. So, in a way, maybe this is … good news for Mitch McConnell?

In his first post-presidential appearance, Donald Trump plans to send the message next weekend that he is Republicans’ “presumptive 2024 nominee” with a vise grip on the party’s base, top Trump allies tell Axios.

What to watch: A longtime adviser called Trump’s speech a “show of force,” and said the message will be: “I may not have Twitter or the Oval Office, but I’m still in charge.” Payback is his chief obsession…

Trump is expected to stoke primary challenges for some of those who have crossed him, and shower money and endorsements on the Trumpiest candidates.

State-level officials, fresh off censuring Trump critics, stand ready to back him up.

That’ll keep the “50” group engaged. The “30” group should be fine with it too, unless we get a raft of Trump-inspired Marjorie Taylor Greenes primarying GOP Senate incumbents. The “20” group is the potential problem for the Republican establishment. Which maybe explains why McConnell has been at pains lately to jab at Trump, knowing how doing so is destined to alienate most of the party. Nothing Cocaine Mitch says to insult the former president will stop Trumpers from voting GOP so long as their hero is still on the team. It’s the 20 percent that’s wary of a total MAGA takeover that needs a reason to stick with Republicans. McConnell’s trying to give that to them by signaling that there remains a base of non-Trump power within the party, in much the same way that Kevin McCarthy was trying to make the GOP hospitable to Trump-skeptics by going to bat for Liz Cheney in her leadership fight.

But whether there really is a base of non-Trump power within the GOP is more theory than fact. Not one of the seven Republicans who voted to convict him after his impeachment trial is facing a tough primary in the near term. (The closest thing to that is Lisa Murkowski, who’ll participate in a top-four jungle primary in Alaska.) Liz Cheney seems to believe that she and her family retain enough influence in Wyoming to let her stand toe to toe with Trump and his candidate in 2022, but it’s a bad sign if backbenchers like Matt Gaetz feel safe campaigning against her in her own backyard with impunity. As I write this, it’s an open question whether any Republican would dare even contest the North Carolina Senate primary if Trump’s daughter-in-law Lara jumps in — and that field potentially includes Rep. Mark Walker, a powerful former leader of the House GOP.

There’s no reason, in other words, to think any McConnell-backed candidate could win a traditional primary against a Trump-backed candidate right now. But maintaining that illusion is crucial to keeping the “20” group engaged, so that’s what Mitch is up to lately. Illusions. Making a big speech about how terrible Trump is — but only after being careful to vote to acquit at his impeachment trial, knowing how a vote to convict might have made his position as caucus leader untenable. Look at it this way: If there were a meaningful base of non-Trump power within the GOP, would rock-ribbed conservative Mike Pence really feel obliged to turn down CPAC? He knows what reception he’d get if he showed up, all for doing nothing more than following the law as written on January 6 instead of attempting to stage a coup on his former boss’s command.

I’ll leave you with two clips from yesterday’s Sunday shows. Representing the “50” group is Steve Scalise, who still can’t bring himself to admit that Biden won the election fairly. Representing the “20” group, surprisingly, is Arkansas Gov. Asa Hutchinson, who’s ready to move on despite his state’s solidly Republican bent. Maybe he’s trying to create some political space there for Tom Cotton in 2024? I don’t know. But it’s unusual to see a conservative government from a conservative state politely pass in public on Trump 3.0.

Look, we fed our people the big lie. Now they're full of it. You in the media can't just walk away from that. You can't ignore millions of Americans who believed what we told them. pic.twitter.com/5laoQhYZvA

Gov. Asa Hutchinson, Republican Governor of Arkansas, on whether he'd support a Trump run in 2024:

"No, I wouldn't. It's time, and he's got a good family, I've worked with Ivanka and others, and they love America. But I would not support him for re-election in 2024." pic.twitter.com/Cn31A67TIx