Trump rips McConnell: This party will never be respected again with this dour, sullen hack in charge 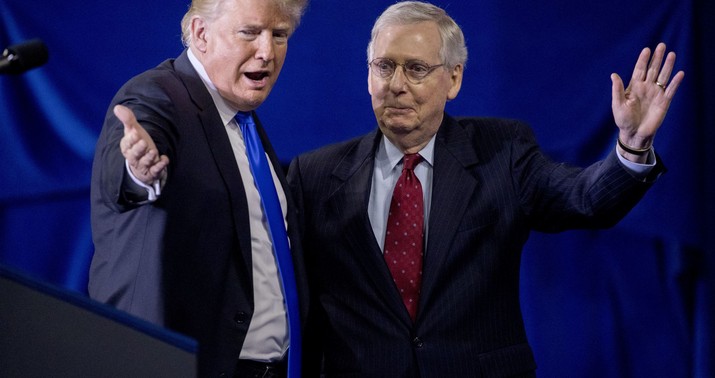 I guess he didn’t like Mitch’s speech after the impeachment trial, in which the second-most powerful Republican in the country all but invited federal prosecutors to lock Trump up. Which is one way to solve the GOP establishment’s MAGA problem.

Even by Trump standards, this is a bruising attack. Maybe that’s because he was especially irate at McConnell’s speech, or maybe the lack of a social media outlet where he can insta-rant in short bursts means we should expect lengthier, more acidic tirades going forward.

Either way, civil war it is.

It’s tempting to call that a direct reply to McConnell’s speech on Saturday but that’s not quite true, as McConnell’s been unusually chatty in the last 48 hours about his views of impeachment and his plans for the party in the 2022 midterms. He published an op-ed this morning in the Wall Street Journal defending his acquittal vote on constitutional grounds, but not without this shot at Trump:

There is no question former President Trump bears moral responsibility. His supporters stormed the Capitol because of the unhinged falsehoods he shouted into the world’s largest megaphone. His behavior during and after the chaos was also unconscionable, from attacking Vice President Mike Pence during the riot to praising the criminals after it ended.

That’s not all. On Sunday he made clear to Politico that he’ll be recruiting candidates for the midterms whom he thinks can win — whether Trump likes them or not: “Some of them may be people the former president likes. Some of them may not be. The only thing I care about is electability.” Yesterday he clarified for the Wall Street Journal that, yes, he’ll get involved in primaries if necessary to make sure that electable candidates aren’t waylaid by MAGA types like Marjorie Taylor Greene who’d have difficulty winning a statewide race. A noteworthy bit:

Inside Mr. McConnell’s orbit, strategists calculate that radical elements inside the party can be weeded out and separated from what they see as a larger group that has unwittingly fallen victim to a misinformation about the 2020 election…

“Georgia was a fiasco,” Mr. McConnell said. “We all know why that occurred.”

We do indeed know why it occurred and it’s not because, as Trump claims, that McConnell wouldn’t get behind $2,000 stimulus checks. (Just like we also know that Mitch McConnell, of all people, didn’t need Trump’s help to win his umpteenth Senate election in Kentucky against a weak opponent like Amy McGrath.) Trump probably saw this morning’s WSJ story, realized that McConnell was blaming him squarely — and fairly — for having cost the party the Senate majority in Georgia, and decided to give him both barrels by claiming that it was the GOP establishment that somehow bungled that race, not two months of propaganda about how voting in Georgia was pointless because its electoral system is rigged.

You can boil the entire statement down to one sentence, though: “Where necessary and appropriate, I will back primary rivals who espouse Making America Great Again and our policy of America First.” He’s threatening to arm-wrestle McConnell for control of the party in the primaries — which Mitch was naturally eager to avoid, telling the Journal in its story this morning that “I don’t rule out the prospect that [Trump] may well be supporting good candidates. I’m not assuming that, to the extent the former president wants to continue to be involved, he won’t be a constructive part of the process.” That’s him telling Trump that they don’t necessarily have to be at odds. To which Trump’s statement replies: Yes, we do now.

Which feels like the official end of Trump’s presidency. Inasmuch as the GOP functioned for four years with an uneasy alliance between him and the establishment’s most powerful figures, that alliance is over. There’s no longer even a pretense that MAGA and GOP Inc. are more or less aligned. Now it’s war. McConnellites sound ready:

I love Trump warning about the demise of a party that just lost the House, Senate, and White House under him.

Interesting timing by Trump with his statement, though, no? Remember that he’s been mad at McConnell ever since Mitch finally recognized Biden’s victory in the electoral college. As of last month, the two hadn’t spoken since that moment; I doubt they’ve spoken since. But Trump had an obvious incentive not to make his disdain for McConnell clear, knowing that Mitch retains heavy influence within his caucus and may — may — have been able to deliver 17 votes for conviction if he’d really wanted to. I doubt it: A party in which 75 percent of voters want Trump to continue to play a major role isn’t going to see a lot of anti-Trumpism in the top ranks. But Trump may have respected McConnell’s power just enough to hold off on issuing this statement until he was safely acquitted. Now that he has been, the gloves are off.

Exit question: Did Trump kinda sorta imply that McConnell has been bought by China?

Trump's initial draft of his McConnell statement was nastier, per two people close to him, and it was delivered in lieu of the press conference he had thought about doing today https://t.co/tNI5uWLNDy