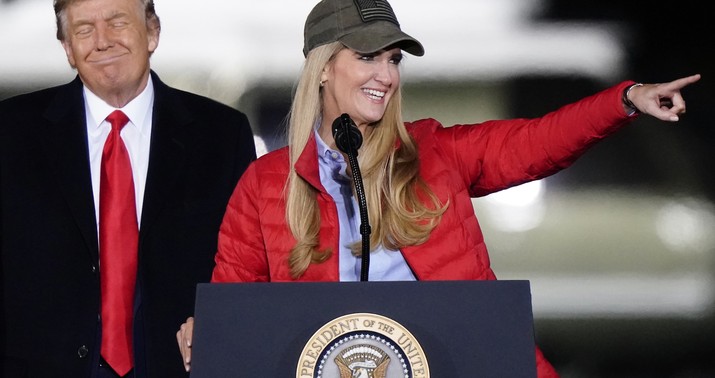 The perfect story to mark a day in which Biden’s COVID relief package advanced in the Senate on a party-line 50/49 vote. Had Kelly Loeffler and David Perdue won their runoffs, Sleepy Joe would have been forced to negotiate with Senate majority leader Mitch McConnell in order to put a bill on the floor. Because they didn’t, Biden and Chuck Schumer have a free hand so long as Joe Manchin and Kyrsten Sinema hang with them. Which they will on a COVID stimulus, given how broadly popular the idea of another round of financial aid is.

How’d we end up in a mess in which two Republican incumbents running in a Republican state in a format (runoffs) that’s traditionally favored Republicans somehow fumbled away a Senate majority to two newbies like Raphael Warnock and Jon Ossoff?

Well, it’s quite simple. Our ex-president is a dope whose obsession with convincing people that he was cheated apparently ended up convincing many of his own voters that it wasn’t worth voting. Just like everyone warned him would happen.

Over 752,000 Georgia voters who cast ballots in the presidential election didn’t show up again for the runoffs just two months later, according to a new analysis by The Atlanta Journal-Constitution of recently released voting records.

More than half of the no-shows were white, and many lived in rural areas, constituencies that lean toward Republican candidates.…

Trump’s message that the election was stolen discouraged voters such as Craig Roland, a 61-year-old Rome resident. Roland said he didn’t believe his vote would count.

“What good would it have done to vote? They have votes that got changed,” Roland said. “I don’t know if I’ll ever vote again.”…

The AJC’s analysis found that the drop in turnout was most severe in northwest and South Georgia, areas where Trump held rallies, in Dalton and Valdosta, to bolster support for the state’s Republican senators.

Eleven percent fewer whites who voted in the presidential election turned out for the runoffs. By comparison, just eight percent fewer black voters did. Warnock defeated Loeffler by 93,000 votes while Ossoff topped Perdue by just 55,000; the number of whites who showed up for the Trump/Biden race but didn’t show up for the Senate races was on the order of 400,000 people.

The most telling detail, though, is the fact that turnout fell off most dramatically in places like northwest Georgia where Trump himself held rallies for Loeffler and Perdue. You know who happens to represent northwest Georgia in Congress? You guessed it: Marjorie Taylor Greene. What are the odds that a deep red constituency comfortable with electing a conspiracy theorist would take to heart eight thousand warnings from the likes of Trump, Lin Wood, and Greene herself that their state’s election system was rigged and therefore their votes in the runoffs might not be fairly counted?

Let me remind you again of this report from NPR published over the weekend. I wrote about it on Saturday but it bears revisiting here since it underlines how far Trump went to make sure that Loeffler and Perdue themselves were amplifying his “rigged election” message:

“It was a hostage situation every day,” said one Republican strategist familiar with the campaigns who only agreed to speak on the condition of anonymity…

“Every week we had some new sort of demand,” said another strategist involved with the campaigns. “Calling for the hand recount. The signature match. A special session. $2,000 [coronavirus relief] checks. Objecting to the electors.”

“It was, ‘If you do not do this, the president will actively work against you and you will lose,’” he recalled.

Politico corroborated that weeks earlier, claiming that the then-president himself “told Kelly Loeffler before he landed in Georgia for a final rally on Monday that if she didn’t back the Electoral College challenges, he would ‘do a number on her’ from the stage, according to a source familiar with the events.” Trump wanted a full-throated, unified messaging effort from Georgia Republicans that he’d been cheated. And, with a few notable exceptions, he got one.

And so he ended up blowing the Senate for the GOP. What a fun discovery for Senate Republicans as they prepare to decide whether to disqualify him from running for office in the future. And what a fun time for everyone else as we get to watch them inevitably pee their pants at the thought of crossing him and decide against convicting him anyway.

But nothing’s more fun than this:

a @wsbtv exclusive at 6: I've confirmed @GaSecofState has launched an official investigation into whether attorney Lin Wood voted illegally. Wood was 1 of most visible, controversial people claiming illegal voting in GA – now state is investigating if he was really a GA resident pic.twitter.com/wymswC17ug

Lin Wood getting pinched for illegal voting would be the perfect ending to this saga of colossal dipsh*ts wrecking their party and their own careers by chasing a feelgood lie about an election-rigging conspiracy.

Between the riot at the Capitol and the revelation that Trump almost certainly cost the GOP the Senate, I wonder what his standing within the party will look like over the next few months. Here’s an interesting new data point from the conservative polling firm Echelon Insights:

The share of Republican voters who want to see Trump run again in 2024 dropped from 65% to 45% post-Capitol unrest. pic.twitter.com/dmVWlosu2i

Republicans have shifted from supporting Trump over the GOP: 48% support👍 the GOP over Trump, while 38% said the opposite. In October 2020, only 30% supported the party over Trump. pic.twitter.com/ag6CRR7s7N

Republicans split evenly, 43/43, in Echelon’s survey when asked whether they thought Biden or Trump actually won the election. I wonder if some R’s have come around to the idea that Biden won fair and square because more GOPers in Congress have begun to say so, or because they’ve gotten used to the idea of a Biden presidency over the past two weeks, or because they’re disgusted by the Capitol riot and feel compelled to reject the sentiment that motivated it. Interestingly, a separate poll shows belief in QAnon among Republicans has also dropped by double digits since October, presumably a result of true believers realizing that Trump wasn’t going to cling to power and execute Democrats en masse after all.

Exit question: Does today’s news about Georgia Republicans boycotting the runoffs give House Dems extra incentive to call Brad Raffensperger to the stand during Trump’s impeachment trial? Democrats would love to have Georgia’s Republican secretary of state testify before an audience of millions that, per these numbers, the “stop the steal” incitement probably ended up costing his party the Senate. Some Republicans just won’t take to heart that what Trump did was wrong unless it can be shown that it hurt them too, not just Biden and the Dems. Well, here’s the proof.

Good job, woke mob: CPAC will no longer use the pro-Biden design firm behind the 'Nazi' stage