Bannon: What if we make Trump Speaker of the House in 2023 and let him impeach Biden for stealing the election? 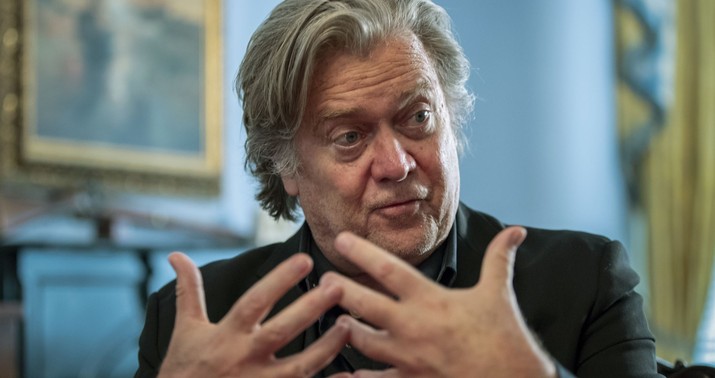 It’s impossible to tell anymore in populist rhetoric what’s a joke, what’s an applause line, and what’s being semi-seriously proposed.

But just in case Bannon’s serious here, let me lend a strong note of support to the effort. Not because Trump would make a fine Speaker — to the contrary, it’s hard to imagine an office to which he’s less suited.

Just because it would mean that after all of Kevin McCarthy’s ass-kissing, his fondest political ambition would end up being immolated on a pyre of pure Trumpian ego. He deserves that. Let’s make it happen.

“Going forward, we can transform the Republican Party into more of a MAGA movement … just immerse the (Make America Great Again) movement with the Republican Party, and we’re going to have massive victories in the future,” Bannon said in a Lincoln Day Breakfast speech [to Boston Republicans]…

“Trump is a disruptor, but he has a long-term vision because I absolutely believe in the marrow of my bones that he will be our nominee in 2024,” Bannon later added. “He’ll come back to us. We’ll have a sweeping victory in 2022, and he’ll lead us in 2024.”

Bannon, who promoted the unsubstantiated allegations of widespread voter fraud in the 2020 election and claimed that Trump won, said his strategy is for Trump to run for Congress in 2022 and say he’s running for speaker of the House.

“We totally get rid of Nancy Pelosi, and the first act of President Trump as speaker will be to impeach Joe Biden for his illegitimate activities of stealing the presidency,” Bannon said, leading to applause and hollers from the Boston Republicans.

That feels like an applause line, especially since Bannon probably knows that you don’t need to be a member of Congress to be Speaker. Any American is eligible. (Which is fortunate for Trump, since Mar-a-Lago lies in a solidly blue district.) A new GOP House majority could draft citizen Trump for the job from Mar-a-Lago. Although good luck convincing him to move back to Washington for any position except the one he used to hold.

There are other flaws in the strategy:

an ingenious plan to make every congressional race in the country a referendum on Donald Trump https://t.co/cldYN1VHfF

Great idea…. make the guy who has no clue about legislation to be in control of congress lol https://t.co/Xg6kE9ACDz

Yes let’s definitely put the guy who’s cool with insurrections in the 3 spot of succession.

The biggest flaw is thinking that Trump would want the responsibility of governing when he could do all of the fun parts of the Speaker’s job from Florida. McCarthy’s caucus is more likely to bow to Trump’s wishes than they are to bow to McCarthy’s, after all. (Unless they’re voting by secret ballot.) If the former president wants the Republican House majority to do something or not do something, all he has to do is phone in to Fox and make his wishes clear. Let McCarthy worry about the vote-counting.

Bannon’s scenario in which the new Republican House tries to impeach Biden for election theft is a fascinating one, though, in that (a) it’s clearly something Trump would relish, (b) it would be popular with many Republicans, (c) it would be highly unpopular with everyone else, and thus a net loser for the party. It would also force Republican members of the House (and potentially the Senate) to answer these two questions posed by Never Trumper Jonathan Last in a format with the highest possible stakes:

Sir/Ma’am, I need one-word answers from you:

2. Was this the legitimate result of a free and fair election?

This shouldn’t take long. The questions can be asked in less than 5 seconds. The answers are one word each: “Biden” and “yes.”

Imagine Trump himself forcing the House caucus to take a floor vote on those two questions in the context of impeachment, knowing that rage from one party’s voters or the other’s is the only possible result no matter how the vote turns out.

If the idea of making Trump Speaker ever did gain traction as a pure act of cultish loyalty from the likes of, say, Matt Gaetz, I think wiser cronies like Lindsey Graham would pull Trump aside and say, “C’mon, you don’t want that job.” For one thing, Trump detests the two people he’d be asked to compromise with on legislation, Biden and either Schumer or McConnell. For another, if Trump’s serious about running in 2024 again, he’d be accountable to voters for every action the House took during 2023-24. And Graham knows that Speaker Trump would turn the House into a pure grievance shop for his personal vendettas, with barely a pretense of legislating. It’s better for him and for the GOP if sticks to carping at McCarthy from the sidelines, keeping his fingerprints off of official Washington.

Speaking of which, exit question: If he’s willing to elbow aside a lesser Republican like McCarthy just because he covets his dream job, why not go ahead and primary Ron DeSantis in the 2022 Florida gubernatorial race? Trump might like being governor instead of president. No foreign policy to worry about, much smaller jurisdiction to govern, and his electorate would be majority Republican. He’d hold the job as long as he wants.