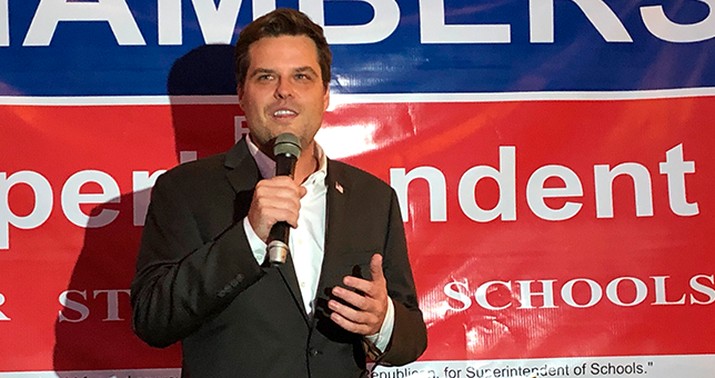 I haven’t seen a direct quote but I’ll take it on faith that Raheem Kassem’s account is accurate. It sounds like something Gaetz would say.

BREAK: @MattGaetz tells #WarRoomPandemic he would be willing to resign his Congressional seat in order to defend President Donald Trump in the upcoming impeachment trial. https://t.co/bCRtEnmC0P

Is there somewhere I can donate to this idea?

It’s all upside for everyone. The anti-Trump rump of the party, led by figures like Liz Cheney, gets to wave bye-bye to one of the most obnoxious MAGA reps in the House. And the huge pro-Trump majority gets an advocate for the former president at his Senate trial who’ll deliver exactly the sort of impassioned, unapologetic defense of his actions that they’re craving. Whom would you rather see at the mic? Matt Gaetz doing his Col. Jessup impression, bellowing at Mitt Romney and Ben Sasse that they can’t handle the truth that the election was rigged? Or this limp dishrag?

Donald Trump’s lead defense attorney for the upcoming Senate impeachment trial said Wednesday he has not been pressured to reprise the former president’s unsubstantiated claims that the election was “stolen” from him, insisting that his defense of Trump will focus strictly on “technical” arguments…

“I don’t know where people got that notion that was some sort of litmus test to get to defend the president, because as you saw from the document I filed, which had to be approved by the president personally, there isn’t anything in there about the election being stolen,” [Bruce] Castor said.

Weak. The only redeeming value this trial can have is if Trump’s defense goes nuts with conspiracy theories, humiliating the Senate Republicans who’ll insist on acquitting him no matter what. Castor won’t give us that. Gaetz might.

In fact, I don’t want to get too greedy but Gaetz could become so popular among MAGA types after a stirring trial defense of Trump that he might land in a position to primary Marco Rubio for Senate in 2022 after all. (Gaetz says he has no interest in that, but whatever.) There’s a divide among anti-Trumpers about whether it’s good or bad for the party long-term to replace “respectable” Trump-enablers like Rubio with have loud-and-proud Trumpers like Gaetz. Those who think it’s bad believe that nothing good can come from having more ardent MAGA disciples in positions of influence. But those who think it’s good believe that it’s clarifying: Why should Marco Rubio lend a “respectable” quasi-independent face to a party that’s now little more than a Trump cult of personality? Better to go full Gaetz and show voters what the GOP really stands for than have reasonable-sounding traditional pols like Rubio and Ben Sasse and Nancy Mace laundering the party to make it more enticing to suburban voters.

Maybe we’d get Sen. Gaetz out of all this. And maybe even more!

I love that left-wing Twitter is like, "YEAH MATT RESIGN!" not realizing that Laura Loomer would take his seat LOL

Let the GOP take its chances in the midterms with an ad campaign aimed at Loomer and Marjorie Taylor Greene and Gaetz. Either they win nationally and the MAGA approach is vindicated or they lose and the course correction finally begins. Did we learn any lessons from the Georgia runoffs, perhaps, about how that strategy is likely to play out?

It would be a sad state of affairs if a former president had to dip all the way down to an ambitious political protege in Congress to provide him with a defense because he simply couldn’t find a respectable lawyer to do it. Talented attorneys don’t usually decline opportunities to represent an ultra-famous party at an historic, nationally televised trial, even if they fear they’re apt to be stiffed on their fees. But Trump has become so toxic from splashing around in election-fraud conspiracy theories that — deep breath — even Alan Dershowitz won’t do it.

Alan Dershowitz, the celebrity attorney who served on the defense during Trump’s last impeachment trial, had been approached repeatedly by Team Trump to lead the legal team, including as recently as a few days ago when the prior team parted ways with the ex-president, according to two people familiar with the situation. Trump had been specifically requesting Dershowitz’s involvement since last month. Still, Dershowitz declined all these offers…

[H]e added that he “strongly” believed such a defense would be “a mistake tactically, and a mistake morally and ethically, to focus the defense on claims that the election was stolen.”

“Former President Trump might lose senators who he would otherwise get [if they did that]…And as a lawyer, I would never make those arguments because I don’t see a factual basis for them,” he continued. “It would be morally wrong for me to present that argument. I’m not criticizing lawyers who would present those arguments, but based on my set of beliefs and factual assessment, I don’t believe the election was stolen.”

How appalling does your behavior need to be for a guy who worked for O.J. and Jeffrey Epstein to feel morally obliged to keep his distance?

According to the Daily Beast, as recently as a few weeks ago Trump was still complaining to aides that the Capitol riot could have been a false flag staged by Antifa, at least in part. One of his advisors told the site he was glad Twitter had banned Trump since, if they hadn’t, he’d be airing his theories on social media and making the vote to acquit even more painful for Senate Republicans. “My guess is that his defense is going to be a sh*t show,” Democrat Chris Murphy said to the Beast, “and I think the only question is what kind of sh*t show it’ll be.” Bring in Gaetz. If we’re going to have a sh*tshow, let’s make it spectacular.