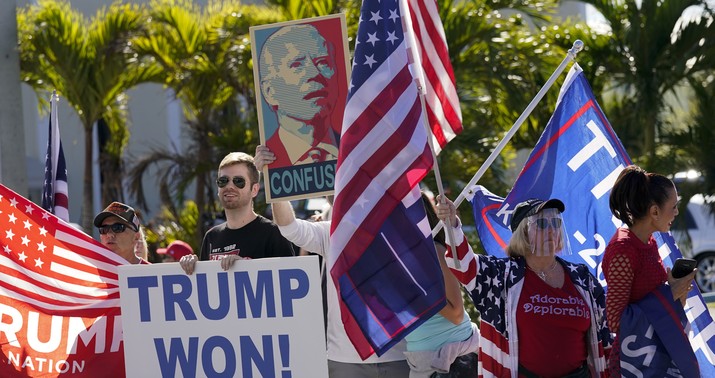 What the hell was the point of dumping the original lawyers if the new guys aren’t going to waltz into the Senate and start spraying “stop the steal” slime like they’re on “You Can’t Do That On Television”?

The whole reason I was excited about Trump bringing in new attorneys to argue election fraud was that it would amount to him grabbing wimps like John Cornyn by the back of the head and rubbing their faces in conspiracy theory dog sh*t, daring them to convict as they grew more embarrassed by the spectacle. They deserve that humiliation. And Trump loves humiliating people. It would have been magical.

So what’s the deal? Who cucked out here?

Trump’s team denied that explanation, and said the defense would focus on constitutional questions involved in the impeachment trial. And [David] Schoen also said he plans to focus on attacking the “weaponization of the impeachment process” and arguing that it is not constitutional to impeach a president once he is out of office.

“I am not a person who will put forward a theory of election fraud,” Schoen told The Post late Sunday night. “That’s not what this impeachment trial is about.”

A Twitter pal pointed out yesterday that Trump arguing election fraud this time while Senate Republicans clamor to argue lack of jurisdiction would have followed the same blueprint from Impeachment 1.0. In that case too, the GOP was grasping for technicalities on which to acquit Trump while the former president predictably demanded full loyalty in the form of vindication. Trump’s quid pro quo demand from Ukraine’s president was bad — but not impeachable, McConnell’s caucus insisted. It was unethical but not a high crime or misdemeanor.

To which Trump said: Screw you. My phone call was perfect!

Second verse, same as the first. Faced with an attack on the Capitol instigated by two months of conspiracy theories alleging a secret Democratic plot to steal the presidency, Senate Republicans have decided that it’s bad — but not justiciable, as a president who’s already left office supposedly can’t be tried. To which Trump was about to say — I thought — “Screw you. There was a secret Democratic plot!”

It’s as if, to borrow Trump’s famous formulation, he had shot someone on Fifth Avenue and now the Senate had to determine his guilt. They’d grope around for reasons to acquit, be it self-defense or temporary insanity or what have you, and then he’d turn around and say, “I wanted the bastard dead. I planned it for weeks!”

At the end of the day, that’s how you test loyalty. Anyone can vote no for “principled” reasons like self-defense. What Trump wants is a guy who’ll look at the evidence piled high as a mountain against him and say, “Not guilty by reason of MAGA.”

You don’t think this Jello mold of a human being would vote that way if Trump gut-checked him by making the trial about election fraud?

@JohnCornyn to @mkraju on Trump's reported desire to argue election was stolen: "As much as there might be a temptation to bring in other matters, I think it would be a disservice to the president's own defense to get bogged down in things that really aren't before the Senate."

You don’t think this guy would chow down on a big bowl of rigged-election dog turds if Trump slapped one down in front of him and told him to eat up?

Sen. Rob Portman says former Pres. Trump's actions were inexcusable, but the constitutionality of impeachment must be addressed: "We would be convicting a private citizen … that sets a precedent."

"It can be inexcusable and yet not be subject to a conviction." #CNNSOTU pic.twitter.com/R1nRfoVaKo

Trump craves dominance in all things, political and otherwise, and nothing would demonstrate his total dominance over McConnell and the Senate GOP than if he went all-in on “stop the steal” at the trial and they acquitted him anyway. I doubt they’d get 10 votes even if Schoen took to babbling like a lunatic about Dominion and Hugo Chavez. How can Trump not want to test that? For cripes sake, John Thune is so desperate not to have to cast a vote against Trump that he’s talking about how maybe the criminal courts should handle this matter instead.

Democrats are reportedly preparing an “elaborate, emotionally charged case” demonstrating how Trump’s words throughout the post-election process ultimately led to a cop being bludgeoned to death during a riot in the U.S. Capitol. USA Today tried to quantify the effect of his incitement by tracking the response on social media on January 6:

Along with “President Trump,” “American people” and “God Bless,” “civil war” was among the top five most frequently mentioned phrases overall on Parler from 12:15 p.m. to 1:15 p.m., as some Trump followers were already assembling in front of the Capitol. Among the fastest-rising phrases after 12:15 p.m., “civil war” made No.1 – followed by “voting machines,” “president elect,” and “Mitch McConnell.”

The analysis adds weight to reports quoting attorneys for riot suspects saying Trump’s speech inspired the attack on the Capitol.

Imagine Dems playing video of riot lunatics chanting “Hang Mike Pence!” and Trump’s lawyers standing up and saying, “Look, they had a reason to be angry. The election was rigged.” Imagine Senate Republicans having to issue a verdict with that contrast before the public. And now imagine nearly all of them voting to acquit anyway.

Because that’s what would happen. How could Trump not want to see that, if only for his own amusement?