McCarthy: I condemn Greene’s past comments — and also the Democrats’ unwillingness to punish their own cranks 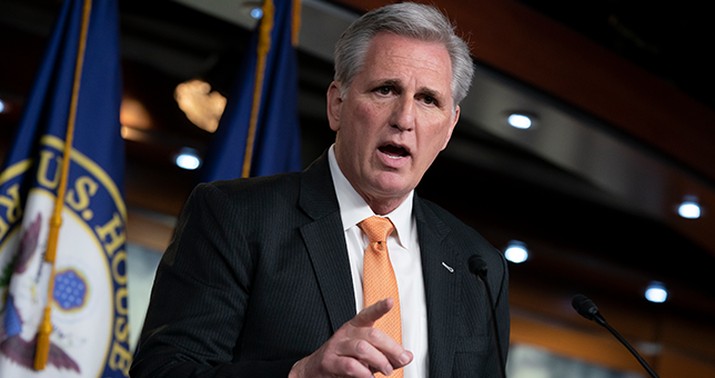 The big GOP House conference meeting at which Marjorie Taylor Greene’s and Liz Cheney’s fates will be decided (possibly?) is happening as I write this but neither McCarthy nor Pelosi is waiting for the outcome to get their shots in. While we wait for news, here’s the key bit from McCarthy’s new statement, which artfully suggests that Greene has turned over a new leaf without actually saying that:

“Past comments from and endorsed by Marjorie Taylor Greene on school shootings, political violence, and anti-Semitic conspiracy theories do not represent the values or beliefs of the House Republican Conference. I condemn those comments unequivocally. I condemned them in the past. I continue to condemn them today. This House condemned QAnon last Congress and continues to do so today.

“I made this clear to Marjorie when we met. I also made clear that as a member of Congress we have a responsibility to hold ourselves to a higher standard than how she presented herself as a private citizen. Her past comments now have much greater meaning. Marjorie recognized this in our conversation. I hold her to her word, as well as her actions going forward.

“I understand that Marjorie’s comments have caused deep wounds to many and as a result, I offered Majority Leader Hoyer a path to lower the temperature and address these concerns. Instead of coming together to do that, the Democrats are choosing to raise the temperature by taking the unprecedented step to further their partisan power grab regarding the committee assignments of the other party.

“While Democrats pursue a resolution on Congresswoman Greene, they continue to do nothing about Democrats serving on the Foreign Affairs Committee who have spread anti-Semitic tropes, Democrats on the House Intelligence and Homeland Security Committee compromised by Chinese spies, or the Chairwoman of the House Financial Services Committee who advocated for violence against public servants.

According to the news reports I read this morning about McCarthy’s meeting with Greene yesterday, he invited her to apologize for the things she said before joining Congress. She refused. When he says in the excerpt that she now recognizes that her comments going forward will have “much greater meaning” by dint of her public office, maybe it means that she made a pledge not to push any new conspiracy theories going forward — or maybe he’s just pretending that she did in order to make it seem like he gained some meaningful concession from her. Either way, it’s clear he’s not going to punish her.

She doesn’t sound too chastened, does she?

There are numerous Republican women in the caucus who match the description of “White, Woman, Wife, Mother, Christian, Conservative, Business Owner” (Liz Cheney has never owned a business, I believe, but matches on everything else) yet only one is being kicked off of her committees. This is standard messaging from populist demagogues of both parties, though, from Trump to Josh Hawley to Greene on the GOP side: “They don’t hate me, they hate you. It’s not what I said or did that enrages them, it’s who I am and who you are.” The crank congresswoman trying to convince fans that she’s been singled out for being white, among other things, instead of for being a giant crank was depressingly predictable. But it’ll work.

What connects the Greene saga to the Liz Cheney saga is the informal rule that Trump-era Republicans are judged by their voters simply on whether they have the right enemies or not. No sin is too great that it can’t be forgiven if the right people are at odds with you and no good deed is so impressive that it can’t be forgotten if the wrong ones are. Liz Cheney has had a strongly conservative voting record for years and yet any goodwill she accrued for it went up in smoke the instant she designated Trump an enemy by voting to impeach. Cheney’s not going to cost the GOP a single seat in 2022 whereas Greene, in some small part, may have already contributed to them losing two in the Senate. But Republican voters will close ranks around Greene while shunning Cheney because, again, one has the right enemies and one doesn’t.

Some well-known Republicans already seem reluctant to criticize Greene, in fact, despite the drumbeat of old social media posts that the media has uncovered this past week:

Jim Jordan says Republicans holding Marjorie Taylor Greene accountable for her remarks (which include social media posts endorsing the murder of the House Speaker) is a slippery slope: "Tell me where it ends. Who's next? Think of the cancel culture." pic.twitter.com/pi3MJtRxuk

Lindsey Graham suggests numerous videos and Facebook posts in which Marjorie Taylor Greene embraces conspiracy theories and violence against Democrats may be "taken out of context" pic.twitter.com/kUsFh2TdK1

Graham’s spin is dumber than Jordan’s. As tedious as the “cancel culture” grumbling over the next few days will be, and as obnoxious as it is to suggest that someone who thinks school shootings are “false flags” might be owed some sort of privileged platform, at least Jordan’s not pretending that every crank thing Greene’s ever said might have been reasonable in some fuller “context.”

Meanwhile, Pelosi is all-in on the strategy of tying McCarthy and the GOP to QAnon — and I mean all-in:

I saw someone on Twitter this afternoon riffing on her statement, imagining that she’ll soon take to calling the Republican caucus leader “Qevin McQarthy.” I’ll repeat what I said earlier, that I don’t think the “GOP = QAnon” message will do much for Dems in the midterms. But as a prelude to Trump’s impeachment trial, at which they’ll present evidence demonstrating how many QAnoners were among the rioters, you can understand why they’re keen to make this connection. They want voters to believe that the GOP as an institution is complicit in the attack because they’re far too solicitous of the Q segment of their base. McCarthy refusing to lower the boom on Greene is another data point in that argument.

It’s 5:30 ET as I write this and there’s still no news on what’s going on inside the House conference meeting — except for this, with which I’ll leave you.

Cheney also told members that she wanted a vote to be called on her leadership status, but members said it’s still unclear if that will happen

What Happened to Joe Biden's State of the Union Address?