Here we go: House will vote to strip Greene of committee assignments after Hoyer and McCarthy fail to reach deal 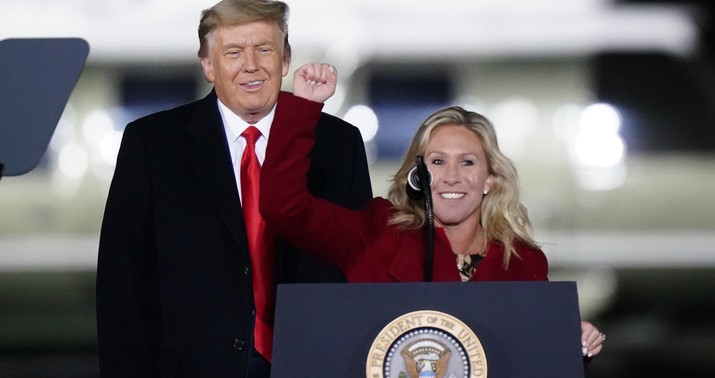 Congratulations to House Republicans, all 211 of whom will now have to cast a vote on this matter and decide whether they want to be known as QAnon apologists or as backstabbers. Do you side with the crazy lady who thought Parkland and Sandy Hook were false flags orchestrated by gun-grabbers? Or do you side with Democrats at a moment when they’re ganging up on a Trump-backed Republican freshman?

Kevin McCarthy could have spared them from that decision if he had sacked up and pushed Greene out. But he’d rather force his caucus to take a hard vote than make a hard decision himself, so here we are.

Frankly, I’m surprised that Pelosi, Hoyer, and House Dems want to go down this road knowing that the GOP base will demand a reprisal once Republicans control the House majority again. Kicking Greene off her committees today means Ilhan Omar will be kicked off her committees in 2023, yet Democrats are willing to do it anyway. Maybe … the Democratic establishment considers that not such a bad outcome?

They also seem confident that making an example of Greene and raising her national profile will redound to their electoral advantage in 2022. Which is odd, because we just ran an experiment on that theory, didn’t we? Donald Trump is a million times better known than Greene and was sufficiently toxic to the electorate in November to generate 81 million votes for a lackluster generic Democrat. And yet Trump’s toxicity didn’t translate downballot. Republicans overperformed in House and Senate races because, it seems, swing voters concluded that his worst attributes weren’t representative of his entire party. Many voters decided that he was unfit for office but that the GOPers who enabled him were not. Why would it be any different with Greene in 2022? If Trump wasn’t the face of the party last November 3, why would she be the face of the party in the midterms?

Either way, the die is cast:

I guess Omar doesn’t care much about her committee assignments because she’s fully onboard:

They can not succeed in bullying their way out of accountability.

That’s why this vote matters. https://t.co/UHTveanYwf

Some of the MAGA members in the House are already pushing a resolution to try to get her kicked off committees too but the eye-for-an-eye outcome here will need to wait a few years.

This morning Politico reported on McCarthy’s meeting last night with top House Republicans to discuss the Greene matter. Quote: “According to our sources, the room agreed that a House vote on this issue would be catastrophic politically for their members who are already angry at being associated with Greene’s crazy statements. That must be avoided, they concurred.” So how the hell did we end up with a situation today in which McCarthy sought some sort of deal with Steny Hoyer to avoid the vote (e.g., kick Greene off one of her committees but not both) instead of just stripping Greene of her assignments himself? Now Republicans are stuck with two bad options, either casting a tough vote on this tomorrow or having McCarthy decide to oust Greene tonight after Hoyer has already called his bluff and made him look weak. A fiasco either way.

Don’t forget that the Greene matter isn’t the only action in the House today. There’s a big meeting coming up in a few hours:

McCarthy, the House Republican leader, had huddled with Greene in his office in the Capitol on Tuesday evening. Afterwards, McCarthy hosted a second meeting with the GOP Steering and Policy Committee to discuss Greene’s fate. No decisions were made, but leaders are expected to meet again on Wednesday, and the full Republican conference also has a planned gathering at 4 p.m, when the topic is sure to be a major focus.

That’s the same meeting at which MAGA reps are going to try to oust Liz Cheney from her leadership position. I wonder if part of the reason Hoyer played hardball on Greene was because he knew it would antagonize the Trumpier part of McCarthy’s caucus and end up bleeding over into their decision on what to do about Cheney. If, as now seems inevitable, Greene is about to lose her committee assignments, the Matt Gaetzes and Paul Gosars in the House will at least want to “balance the scale” by demanding that Cheney be punished too. McCarthy would have had an easier time convincing them to go easy on Cheney if Greene had gotten off easy too. Which makes this potentially a twofer for Dems: They may end up deepening the party schism over Cheney by being hard on Greene.

And according to reports, McCarthy did try to give Greene an easy way out here. She just wouldn’t take it because (a) she’s a sincere crank who doesn’t see that she’s done anything wrong, (b) she believes, as seemingly all populists do, that apologizing is some sort of character flaw as evidence of “weakness,” and (c) she’s not in Congress to legislate, she’s there to grievance-monger and raise money with endless cycles of “I’ve been victimized” and “I’m fighting back.”

During his meeting with Greene, McCarthy asked if she would apologize for her past comments and views, which she did not agree to, a person with knowledge of the matter told CNN. Another person familiar with their conversation also said that McCarthy provided a slew of options to her, including that she could show remorse and apologize.

New dirt on her continues to emerge every day, including literally as I was writing this post. That’s what House Republicans are worried about: If they go to bat for her by voting to leave her on her committees, what sort of insanity will be revealed next week that they’ll be asked for comment on? It would have been easy-ish if Greene had taken McCarthy’s offer to apologize for everything, irrespective of how unconvincing that would have been, since then House GOPers could say, “I don’t want to punish anyone for what they said before getting elected. She’s sorry now and that’s what matters.” But she’s not sorry. On the contrary, she’s posting screeds on social media today about just how not sorry she is.

And meanwhile the Democrats’ master plan to make her nationally famous is starting to work:

I’m reeeeally interested to see how everyone votes on Greene tomorrow, assuming McCarthy and the caucus don’t yank Greene’s committee assignments before the vote is held. Will the 10 pro-impeachment Republicans vote with Dems again this time? I think Adam Kinzinger will but I’m not so sure about Cheney. She thinks she still has a future in the caucus and the party whereas Kinzinger clearly doesn’t. I’m also keen to see what happens with the next “tier” of anti-Trump Republicans, the people like Nancy Mace who say all the right things in interviews but didn’t have the stones to vote yes on impeachment. Are they prepared to go against Greene, knowing that that could make them primary targets for MAGA?

I’m guessing we’ll hear many a floor speech tomorrow from Republicans about Greene being a victim of “cancel culture” followed by a vote in which, let’s say, a dozen cross the aisle. Stay tuned. I’ll leave you with the Ghost of Republican Establishments Past endorsing the Dems’ bid to marginalize Greene.

Karl Rove says Marjorie Taylor Greene should be stripped of her committee assignments and "confined to the dark recesses of the furthest building away from the house floor" pic.twitter.com/dGh62vIMt5