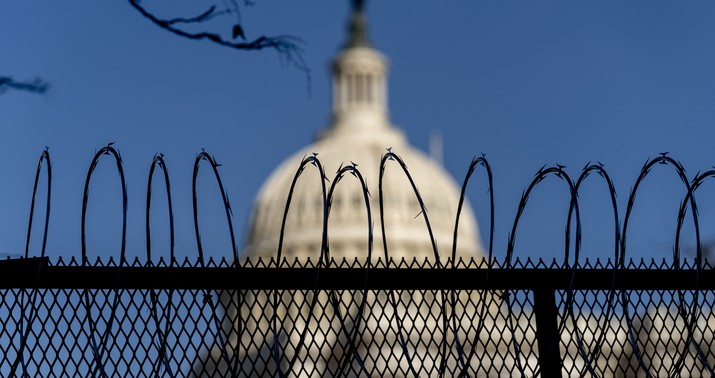 The hatred for this idea is visceral and bipartisan on social media this afternoon. I can’t even muster a hot take to defend it.

How’s this: Considering all the ways in which our country is rapidly declining, it’d be weird if we *didn’t* need depressing permanent barriers to secure Washington at this point.

Freely accessible public landmarks are a sign of healthy, confident civic cultures where the people trust each other and their institutions. God knows that isn’t us.

New statement from acting US Capitol Police chief: "Vast improvements to the physical security infrastructure must be made to include permanent fencing" pic.twitter.com/6JMPfcn1E9

Wow. USCP says “vast improvements” needed to Capitol security, including “permanent fencing and the availability of ready, back-up forces in close proximity to the Capitol.” pic.twitter.com/PpD2UpqLkQ

Read the full statement closely. Lost in the hubbub over fences is the detail about adding standing “forces” close to the Capitol and White House that can rapidly deploy in case, you know, another mob shows up wanting to mass-murder lawmakers.

By far the most trenchant criticism of adding permanent fences is that they’re a fig leaf to cover up the horrific failings of Capitol security on January 6. If the sergeants-at-arms and leadership of the Capitol Police had done their jobs, they would have had a much sturdier response in place to greet the mob when it arrived that day. It was no secret that Trump had thousands of rallygoers in town to hear him speak as Congress convened to certify Biden’s win. Why were so few Capitol Police officers prepared for the threat?

Are the police expecting there will be another riot that they’re amply warned about and choose not to deploy adequate personnel to stop?

What if instead of punishing DC residents and the countless people who visit here every year because of a complete failure on the part of Capitol Police leadership to adequately act on clear intelligence beforehand, we… didn't? https://t.co/T8eFgpui0f

The head of the Capitol Police union unloaded on the brass yesterday in a letter, demanding to know why the rank-and-file weren’t better equipped given how clear the magnitude of the threat had become. Adding permanent fences is a de facto admission, it seems, that the CP isn’t confident it’d do any better controlling the next riot despite having learned a hard lesson from the last one. A WaPo reporter calls BS on the fence:

Forget a threat briefing! No sitting USCP official publicly answered a single question about Jan. 6 publicly until YESTERDAY! 2 WEEKS LATER!
That the USCP brass feels it has the standing to now unilaterally declare that the campus needs to walled off is simply galling. https://t.co/ER53Po1KYY

The one complicating factor in all this is that there *is* a legit, persistent, elevated threat to lawmakers in the aftermath of January 6 according to lawmakers themselves. There have been endless stories about members of Congress being threatened lately; Kevin McCarthy went so far as to ask House Republicans to stop singling each other out by name for criticism for fear that it would steer some violent nut into an assassination attempt. Twenty-nine House Democrats and one House Republican (Fred Upton) sent Pelosi a letter this morning asking that they be allowed to use part of the funds they’re allotted to run their offices for extra security — specifically, extra security outside Washington. Ironically, the Capitol may be where they’re safest at the moment:

“The increased level of threats has overwhelmed the Capitol Police Threat Assessment Section,” the letter goes on to say. “Today, with the expansion of the web and social media sites, so much information about Members is accessible in the public sphere, making them easier targets, including home addresses, photos, personal details about Members’ families, and real-time information on Member attendance at events. Current legal statutes make it extremely difficult to prosecute most threats made against Members of Congress…

Current rules allow them to use the money to reimburse themselves for security equipment like bulletproof vests, as well as funds for security at local public events. The authors of the letter would like more funds in light of the increased threats they’re receiving, and they want to be able to pay for capital security upgrades at their district offices, local law enforcement or other security personnel in their districts, and other security items to protect them in their homes.

Until two weeks ago, the most notorious recent examples of members of Congress being targeted for death each happened when the victims were away from the Capitol grounds. That would be Gabby Giffords, who barely survived being shot in the head in Tucson 10 years ago, and several Republican members of Congress who were shot by a crazed Bernie Sanders fan on a Virginia baseball field in 2017. Mitt Romney, Lindsey Graham, and at least one other member of Congress have been accosted recently in airports en route to or from Washington, although thankfully none were attacked. (Airport security for members of Congress was tightened as a result.) We’re approaching the point where senators and representatives will simply need to appropriate more taxpayer money to provide themselves with full-time security details. I assume that won’t happen unless and until someone really is attacked, but once they are, it’s a matter of time afterward.

In lieu of an exit question, go read Tom Cotton’s op-ed calling for the National Guard to be sent home from Washington after it was announced that several thousand will remain deployed in D.C. through March. I’m sympathetic to getting Guardsmen back to their families as soon as possible but there’s an impeachment trial coming up. And there’s no reason to think that the sort of lunatic who would break into Congress to try to stop Biden’s certification wouldn’t also try to break into Congress to try to stop Democrats from making their case against Trump.