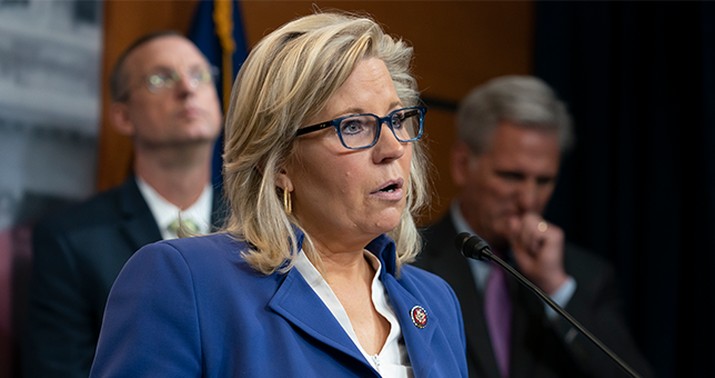 Another caucus headache developing for McCarthy while he’s busy with the Marjorie Taylor Greene fiasco. A New York Times reporter claims that this text message being beamed out to Gaetz fans has gotten some attention among the House GOP tonight:

Gaetz asks “Patriots” to assemble to “STOP RINOs like Liz Cheney.” That reads ominously after 1/6. pic.twitter.com/jKOnm5AWEX

Why would House Republicans take an interest in what Gaetz is up to? Well, for starters, it’s unusual for a congressman from Florida to be organizing rallies against a member of his own party in Wyoming, far across the country. If Gaetz has something to say about Cheney, he can say it more easily to Fox News than to a crowd in Cheyenne. But the deeper reason, I think, is the fear of incitement. Getting an angry crowd going at a capitol building to punish an anti-Trump heretic is risky business potentially, three weeks after Mike Pence narrowly escaped with his life. In fact, McCarthy has explicitly told his caucus lately to avoid criticizing each other by name. Why?

Because the risk that anti-Trump GOP reps will be harmed by a pro-Trump fanatic is simply too high. Gaetz apparently doesn’t care.

McCarthy issued a similar plea two weeks ago, warning Republicans that calling out a member by name to the press could put their colleagues in danger. There has been an uptick in threats against Republicans who voted to impeach Donald Trump; one lawmaker who voted to remove Trump from office, freshman Rep. Peter Meijer (R-Mich.), even said he’s had to invest in body armor…

Meanwhile, conservative firebrand Rep. Matt Gaetz (R-Fla.), who has been one of the most vocal Cheney critics, will even campaign against Cheney in Wyoming this week.

“My only conversation with Kevin McCarthy, was after a TV hit, he asked me not to name members by name because we’ve all seen a substantial increase of death threats,” Gaetz told reporters this week. “I’ve subsided referencing people by name for a day or two. As Liz became more problematic with her divergence with the conference, it became untenable not to identify her as against the America First Vision.”

The Gaetz/Cheney feud is an old one, but Gaetz *admits* that threats have increased and surely he knows that Cheney is the most prominent of the pro-impeachment Republicans. Yet he’s going ahead with the rally anyway because … I’m not sure why. She became “more problematic,” he says, which I guess means that he expected her to recant her impeachment vote and she didn’t, which in turn means it’s time for a little incitement. In fairness, Cheney’s team has hit back at him too although with nothing as drastic as organizing a crowd against him. Learning of his plans to hold a rally in Cheyenne, her spokesman said, “Rep. Gaetz can leave his beauty bag at home. In Wyoming, the men don’t wear make-up.” (Gaetz does in fact do his own make-up for his many Fox News appearances on location in and around the Capitol.)

Anyway, McCarthy’s going to look like an unbelievably weak chump if Gaetz holds the rally as scheduled. He held a conference call with members tonight and warned them again explicitly to “cut that crap out,” referring to their attacks on each other. “I’m not putting up with that anymore,” McCarthy emphasized. Presumably that call was organized with Gaetz’s rally in mind and yet, as I write this at 7 p.m. ET, it’s still on for tomorrow. If it happens, what’s McCarthy prepared to do about it? He’s either putting up with it or he isn’t.

While we’re on the topic of Gaetz, here’s a quote from another story I read this morning that grabbed me and made me think of him:

Going on Fox and being an a**hole isn’t what Gaetz spends all of his time doing (he’s taken a few interesting votes in favor of legalizing marijuana and limiting presidential war powers) but it’s like 98 percent of it. And he’s scarcely alone. Trump devotee Madison Cawthorn, the youngest member of the House, has his priorities firmly in order if he wants to succeed as a Gaetz-style Trump-era “performance art” Republican:

“I have built my staff around comms rather than legislation,” Madison Cawthorn wrote to Republican colleagues in a Jan. 19 email obtained by @abbyvesoulis https://t.co/UNhJFdi8Wi

“Comms” is short for “communications,” of course. Essentially he’s prioritizing media appearances to own the libs over doing the hard work of policy to improve his constituents’ lives. That’s sort of defensible for a very young freshman since he’s destined to have zero influence over legislation. And it’s also sort of defensible given the reality of how Congress operates in 2021, where the leadership of both parties drafts legislation and members are asked merely to decide whether to rubber-stamp it or not. The problem is that that logic is by no means limited to MAGA all-stars like Cawthorn and Gaetz. It’s endemic in the party, particularly among the populist wing. Righties don’t run for Congress to legislate anymore, really, they run in order to grandstand from a pedestal and rack up Fox appearances in hopes of claiming a higher office eventually when one opens up or turning themselves into a cable-news “personality.” Looking at it that way, you can understand why Gaetz wants to do his rally. It’s bad for the party but it’s good for his “brand.” It’s not like he has anything better to do as one of 435 legislators among 330 million people during a grinding pandemic and economic catastrophe.

'You don't have to do this': Liberal boycotter Sleeping Giants tells Hasbro it didn't need to clarify what's happening to 'Potato Head'

Jill and Joe Biden Do Yet Another Joint Interview, and It's Really Awkward