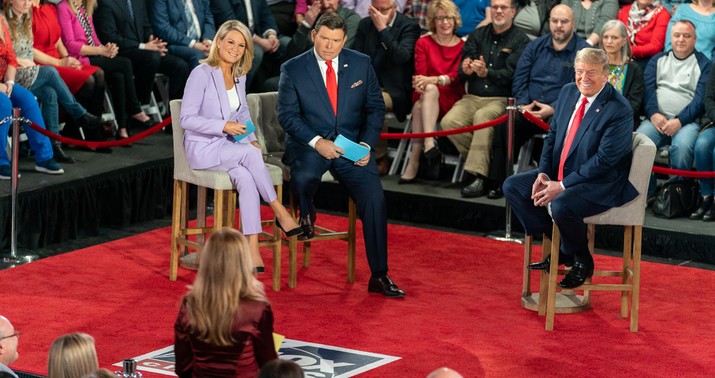 You don’t need to be a network executive to understand the play here. On December 9 I wrote this, after news broke that Greg Kelly of Newsmax had outdrawn MacCallum among the 25-54 demographic during the 7 p.m. hour on Monday, December 7. Quote:

In a sense, Kelly versus MacCallum is an unfair fight. Kelly is Newsmax’s best-known polemicist, the guy who’s benefited the most from the surge in righty interest in the network. MacCallum is the last “news” hour of Fox’s day before the network’s own mega-rated team of polemicists takes to the air. If you’re looking for red meat during the 7 p.m. hour and you just can’t wait until Tucker comes on, it’s no contest: Kelly will deliver more than MacCallum. Which makes me wonder if Fox isn’t going to have to switch to an alternate-reality polemicist of its own at 7 to claw back some of those Kelly viewers.

I think Fox was worried that too many MAGA fans hungry for outrage were turning the dial at 7 to get a dose of it from Kelly and not all of them were turning back in time for Tucker at 8. Solution: Start the outrage programming on their own network an hour earlier and move MacCallum to the hard-news ghetto of daytime hours. It feels like a bad sign, five days after the Capitol was sacked, that Fox has concluded, “We’re not riling people up enough,” but here we are. Poor Martha!

The most notable changes have news anchor Martha MacCallum moving from her 7 p.m. slot to hosting a dayside show at 3 p.m. Harris Faulkner will no longer host Outnumbered Overtime a 1 p.m., and will now host The Faulkner Focus at 11 a.m. Chief White House Correspondent John Roberts is being rewarded for his work by moving to studio as co-anchor of a new two-hour program with Sandra Smith. Smith, who hosted America’s Newsroom from 9-11 a.m., will be replaced by Dana Perino and Bill Hemmer, who is being moved back to 9-11 a.m. in the shakeup.

The new 7 p.m. show will be called “Fox News Primetime” and will feature a “rotating group of Fox News opinion hosts” until a permanent replacement is named. I assume that means they’re going to use the next few months as informal tryouts. Maybe Gutfeld gets a turn, Will Cain, Pete Hegseth, and so on. Or maaaaaybe Fox will try to poach Kelly himself from Newmax and simply bring his audience back into the fold that way. Given how much more FNC is able to pay him than Newsmax is, I bet Kelly’s reviewing his contract terms closely today.

As for MacCallum, it was more than just one bad night against Kelly in December. Fox brass “clearly don’t think [MacCallum] is strong enough to be part of the prestigious primetime lineup,” said one network staffer to the Daily Beast, citing her difficulties against CNN and MSNBC even before the election. Another Beast report published on January 2 noted that Fox’s ratings had declined most precipitously in the 6-7 p.m. “news” hours with Bret Baier and MacCallum:

During those early evening slots, Newsmax saw its total audience increase by an astonishing 497 percent, or 502,000 viewers. While both CNN (14 percent) and MSNBC (4 percent) also enjoyed slight post-election viewership bumps, Fox News experienced a decline of 38 percent and 1.3 million total viewers during that span.

Nowhere is the Fox’s ratings leakage more apparent than in its “hard news” hours of 6 to 8 p.m, featuring Special Report with Bret Baier and The Story with Martha MacCallum, respectively. Baier’s program, for instance, lost 39 percent of its audience while Newsmax’s Spicer and Co. gained 667 percent. MacCallum’s show, meanwhile, dropped 44 percent of its viewership after the election while ardent Trump sycophant and ex-Fox host Greg Kelly picked up 486 percent over on Newsmax.

They had to stop the bleeding from Newsmax! Didn’t they? Eh, maybe not: Newsweek notes that, after peaking at an average of 398,000 viewers in mid-November, Newsmax lost more than half that number and landed at 191,000 between December 28 and January 1. (Of course, that was a holiday period and may not be representative of what the coming year will look like.) Fox may have decided that, although Newsmax’s bubble has deflated a bit, Trump will be out of office in nine days and may give Newsmax priority for interviews because of his grudge against Fox. A big Trump presence on the network could bring Newsmax roaring back to life. So Fox is going on offense by adding an extra opinion hour during a time of day when viewers clearly crave one and have been willing to desert the network to satisfy that craving.

And maybe Fox is okay with letting Newsmax take the lead on Trump content after last week’s fiasco at the Capitol. “Is any president worth all of this time and attention? All politicians come with a shelf life. In Trump’s case, the expiration date arrives in 13 days,” said Tucker Carlson the day after the attack. “Two weeks from Thursday, Donald Trump will no longer be in control of our nuclear arsenal. He will not have command of federal agencies or even, most likely, his own Twitter account. The rest of us, and this is key, will still be here. We’ve got nowhere to go.” Smells like Fox is positioning itself to be nationalist TV and/or anti-Biden TV but not necessarily Trump TV. Let the fringier networks handle his damaged goods if they like, assuring viewers that Trump is the savior of the nation even as some of his fans turn violent. Fox will do just fine sticking to the less risky message that Democrats are out to get you. “Become a MAGA safe space,” is how the NYT describes Fox’s strategy, which I’d tweak to say “a MAGA safe space without as much MAGA.”

As for the long-touted possibility of a true “Trump TV” network, that’s probably gone now per Jack Shafer:

The days where he could swagger, defame and incite without suffering crippling repercussions appear to have ended. To pour the foundations for a new media operation he would need lots of capital, something he appears not to possess. He would need a media mastermind like Roger Ailes to guide it—but Ailes is dead.

What successful media wizard can you think of who is dying to throw in with a discredited ex-president? And most of all, to sustain a bruising media battle against the current market incumbents, he would require advertiser support. Beyond the My Pillow guy, the purveyors of herbal remedies and reverse mortgage operators, how many American brands want to associate their products and services with an unindicted (for now) accessory to sedition?

Which corporate titan wants to do business with him now? For all the hype about Trump bringing Fox to its knees after leaving the presidency, the truth is that he suddenly needs Fox more than it needs him. It’s almost certainly the most influential outlet still available to him.

Maybe he’ll end up doing a daily radio show instead, where he can rant for an hour about the day’s grievances. That would be ironic since it would place him in direct competition with the members of conservative media who were most sycophantically loyal to him over the past four years. Just as Mike Pence ended up beating eaten by the MAGA tiger he tried to ride, maybe Rush and Hannity will face the same fate — assuming any radio broadcaster is willing at this point to give Trump an hour or two of daily afternoon airtime to say whatever he wants, I mean.

Update: An emailer reminds that Kelly has worked for Fox before, both the big network and the New York affiliate. If they were willing to part ways with him twice, is it realistic that they’d bring him back now? I think they’ll end up searching in-house for their 7 p.m. person.