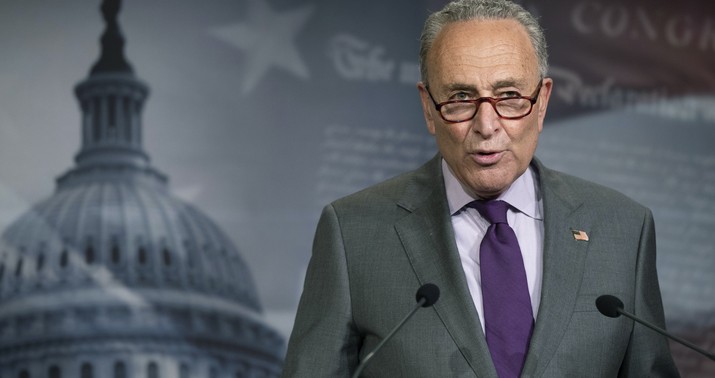 Pelosi’s holding a press conference at 1 p.m. ET, which may or may not mean that she’s going to echo Schumer’s call.

If so, I don’t understand why either of them would push the 25th Amendment, tactically or strategically.

But then I also don’t understand why the House has adjourned until Monday at a moment of national crisis.

Our republic is in great danger, and it is imperiled further without swift action to protect it.

The President incited an attack on Congress. He is deeply unstable. The Cabinet must invoke the 25th amendment.

Congress must also pursue impeachment and removal of the President.

Three reasons why it’s a bad idea for Schumer to get in front of this. One: If there is some effort among the cabinet to invoke the 25th Amendment, now it’ll look like it was done at Democrats’ behest. If it’s going to happen, it should be ringled by Republicans to make it harder for Trump to complain that this is some sort of “Democratic coup.”

Two: Impeachment is seen as more legitimate by the public. The 25th Amendment has never been invoked; most Americans couldn’t even tell you what it says in basic terms. Impeachment, on the other hand, has been used by both parties in the past. It doesn’t seem as irregular.

Three: The 25th Amendment has a higher procedural bar than impeachment and therefore would probably only result in Trump’s powers being stripped for a few days. Quote:

In other words, Pence and the cabinet send Congress a letter saying, “Trump’s incapacitated so Pence is president now.” Trump immediately turns around and sends a letter saying, “I’m fine.” Pence and the cabinet then send another letter saying, “No, you’re not.” Then Congress meets within two days — and has to get *supermajorities* of both chambers to agree that the VP is the rightful president or else Trump remains in charge. I’m highly skeptical that Pelosi could get the 80+ votes she’d need from the MAGAfield Republicans in the House to clear that bar. Under impeachment, all she’d need is a simple majority of the House, which is a sure thing. Then it’d be McConnell’s problem to find 19 Republican senators willing to remove. That’s not a sure thing, but it’s not a no-chancer either under the circumstances. The Senate GOP has behaved far more independently than the House GOP has over the past few days.

So why is Schumer even raising the 25th Amendment? All I can think is that Dems do intend to pursue impeachment but they’re giving the cabinet a chance to act first. Then, when the cabinet declines, Dems can say, “Oh well, guess we have no choice but to act.”

There’s one other major advantage to impeachment over the 25th Amendment. If Trump is impeached and removed, the Senate can bar him from future federal office. No 2024 campaign. That doesn’t happen with the 25th Amendment — and no, unfortunately, it’s no answer to say, “Surely Americans wouldn’t re-elect a man who’d been removed by his own cabinet for mental incapacity.” Have you looked at the state of this country lately?

Until this week, the 25th Amendment was a complete nonstarter for a simple reason: Could anyone imagine the most obsequious VP in American history invoking it against Trump, knowing how doing so would immolate Pence’s chances of inheriting Trump’s base in a presidential primary? But things change:

“I had a long conversation with him,” said Inhofe. “He said, ‘After all the things I’ve done for (Trump).’”

Sometimes they change a lot:

2/ the president has generally spared Pence that kind of treatment. Not this week.

No doubt Pence would very strongly prefer to let Pelosi and McConnell take the lead against Trump from here on out. But there is one advantage to the 25th Amendment over impeachment: Immediacy. As David Priess and Jack Goldsmith note at Lawfare, the ping-pong between letters from the VP and the president over his alleged incapacity could freeze Trump out of power for a few days. If Pence and the cabinet submit a letter this afternoon insisting that Trump is incapacitated and then Trump responds, the second letter from Pence and the cabinet could be filed immediately. That would leave Pence in charge for 48 hours. During that time, Congress could meet to impeach and remove Trump, leaving Pence in charge permanently. Impeachment takes time; the 25th Amendment could buy the necessary time.

Whatever happens, Trump leaving office solves only part of the problem. He appears to have had no real objection to the terrorism perpetrated yesterday by his fans. And no doubt they’ve noticed. Exit quotation from Maggie Haberman: “They’re concerned about insurrections popping up around the country, especially because the president is so incredibly cued into his supporters.”

DAAAMN! EPIC thread tears congress a new one by calling them out point-by-PAINFUL-point on why their approval rating is in the toilet