Is Trump still in control of the executive branch? 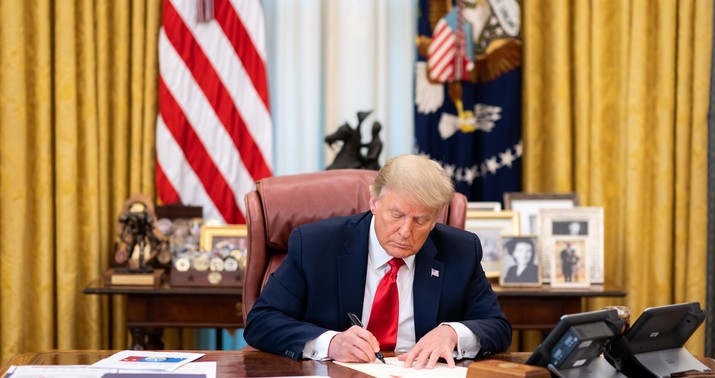 But there’s chatter about both options this morning on Capitol Hill.

What I mean is, are executive branch officers still answering to Trump?

@VP office confirms Pence ran the security operation from Capitol Hill consulting with almost everyone except the President. WTF? Who is in charge of the government right now.

Lockhart’s correct about Pence’s unusual role in security operations yesterday. Trump had previously delegated authority to command the D.C. National Guard to defense secretary Chris Miller, but of course Miller could have consulted with the president about what to do. He didn’t. According to WaPo and CNN, he spoke to Pence, not Trump.

Maybe there’s a reason for that. It seems the president has abdicated his duties to protect national security because at the moment that would require him to restrain his fans against his enemies. Better hurry it up with that self-pardon, my man:

White House officials were shaken by Trump's reaction to a mob of his supporters descending on the Capitol today. He was described to me as borderline enthusiastic because it meant the certification was being derailed. It has genuinely freaked people out.

Maybe Miller called the White House and was told by aides that the commander-in-chief was on the side of the terrorists sacking the Capitol and he should run this by Pence instead. So Miller may have just cut him out of the process. Pence was the functional authority at a moment of unprecedented crisis for the country.

This statement purportedly issued by Trump this morning and posted by Dan Scavino doesn’t sound like him either:

Little late for the “orderly transition” part, but never mind. Who wrote this? Who authorized its publication? It seems to have been the product of a staff revolt: “One official said Trump would have to issue a statement committing to a transfer of power and to prosecuting the rioters to keep some of his top aides on the job for his final 13 days in office.” And so the statement was issued (at least the part about an orderly transition) in Trump’s name by … someone. Jared Kushner? Mark Meadows? Pat Cipollone?

It occurred to me after reading that last night that impeachment and the 25th Amendment aren’t technically the only two options for removing power from Trump. They’re the only two legal options, but there’s a third option: Mass insubordination. What if the entirety of the cabinet decides, without formalizing anything, that they’re taking orders from Pence from now on because the stability of the country demands it? What if they just stop taking the president’s calls?

He could try to fire them, but who’s going to enforce those orders? If he tweets that, say, Chad Wolf is terminated…

My full statement condemning violence at the U.S. Capitol. pic.twitter.com/N9vlAUQILA

The reason we’re contemplating a “soft” 25th Amendment coup this morning in response to yesterday’s coup attempt at the Capitol is because more than one media outlet is hearing from sources that Trump seems on the brink of some sort of mental break. “Some stalwart aides and confidants — after years of enduring the crazy and trying to modulate the chaos — have given up trying to communicate with him, considering him mentally unreachable,” said Axios, explaining the wave of resignations last night. Pence’s top advisor, Marc Short, was allegedly banned from the White House by Trump because the president simply can’t control his rage over yesterday’s “betrayal” during certification. WaPo has this scene:

People who interacted with Trump on Wednesday said they found him in a fragile and volatile state. He spent the afternoon and evening cocooned at the White House and listening only to a small coterie of loyal aides — including Meadows, deputy chief of staff Dan Scavino, personnel director Johnny McEntee and policy adviser Stephen Miller. Many of his top confidants — Meadows, son-in-law Jared Kushner and first lady Melania Trump, among others — were publicly silent.

“He’s got a bunker mentality now, he really does,” the close adviser said.

As rioters broke through police barricades and occupied the Capitol, paralyzing the business of Congress, aides said Trump resisted entreaties from some of his advisers to condemn the marauders and refused to be reasoned with.

“He was a total monster today,” this official added, describing the president’s handling of Wednesday’s coup attempt as less defensible than his equivocal response to the deadly white supremacist rally in 2017 in Charlottesville.

We’d need a professional to diagnosis him but what’s happening here seems reasonably straightforward. An intolerable reality, that Biden has won and that Republicans are more loyal to America’s civic traditions than to Trump, has finally intruded into a paranoid, conspiratorial, pathologically narcissistic mind. No one knows how he might lash out as he struggles to cope with that reality. That is to say, the 25th Amendment talk isn’t just a backdoor coup option in this case. It’s defensible on the merits. The president may be honestly psychologically “incapacitated” to a degree that he’s unable to carry out his duties. If he weren’t, Miller would have talked to him yesterday instead of Pence, no?

If there really is a “soft” 25th Amendment play under way, though, then the media needs to deplatform Trump as comprehensively as possible. Once he realizes he’s lost the loyalty of all of his deputies, the final mental break may happen and he might resort to explicit violent instigation. There’s no way to stifle him completely — some far-right outlet like OAN or Parler will be willing to give him a soapbox even if he reaches the “fatwa” stage of this terror campaign — but the big outlets can limit his reach. Just stop reporting on him.

This is the sort of moral compromise the country now faces. “Should the head of state be censored by private outlets because he’s a major, legitimate national security risk?”

Here’s Adam Kinzinger, who’s clearly willing to lose his job in 2022 in the name of speaking the truth. By the way, some media outlets reported yesterday that MAGA mobsters who entered the Capitol were chanting “Where is Pence?” and were actively searching for members of Congress. There’s every reason to believe that, if they had found him, the vice president of the United States would have been lynched by crazed supporters of his own boss. And if you told Trump that today, I’d bet every penny I have that he’d say, “Well, he would have deserved it.”

It’s with a heavy heart I am calling for the sake of our Democracy that the 25th Amendment be invoked. My statement: pic.twitter.com/yVyQrYcjuD