Georgia ballot signature audit: No fraud, only two mismatches out of 15,000 envelopes examined 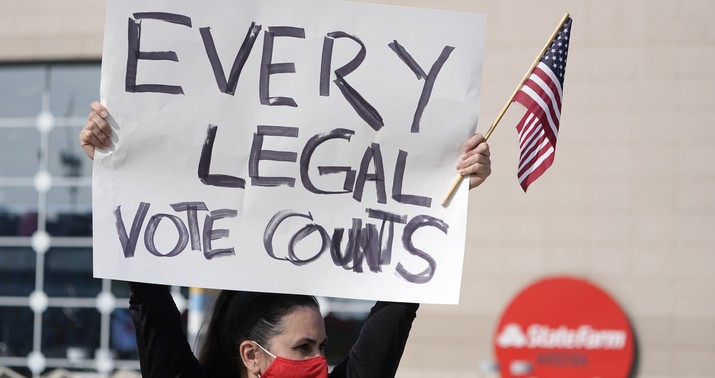 It wasn’t just Brad Raffensperger’s office that was involved in this audit. The Georgia Bureau of Investigation participated too. Which means we can now say with absolute confidence…

…that this vote-rigging conspiracy goes even higher than anyone knew.

Or, I suppose, we might conclude that there was never any vote-rigging conspiracy considering that a hand recount and an automated recount and a signature audit of a random sample of mail-in ballots from Cobb County have all failed to produce any evidence of cheating in Georgia. But since conspiracy theories are unfalsifiable by nature, there’s no amount of debunking that can put the theory to rest. There’s always another unturned stone somewhere that’s concealing “the truth.”

In fact, if not for his family being threatened with death, it’d be amusing watching Raffensperger doggedly try to get through to doubters knowing that he’s doomed to fail at every turn.

There were 10 absentee ballots that had been accepted but voter signatures didn’t match or signatures were missing, according to the report. But agents from the GBI and investigators with the secretary of state’s office contacted those voters and confirmed they had submitted those ballots.

In one case, a voter’s wife signed her husband’s ballot envelope. Another voter signed the front of the envelope instead of the back. Eight voters had mismatched signatures, but the voters told investigators the signatures were legitimate…

The audit reviewed 15,118 absentee ballot envelopes, pulled from 30 randomly selected boxes, out of over 150,431 total absentee ballots returned in Cobb County, a large enough sample to give a 99% confidence level in the results, according to the report…

The audit took place in Cobb County based on a complaint that signatures weren’t adequately checked there. Raffensperger also plans a statewide audit of each county’s signature match policies and procedures.

Trump had spent weeks publicly pressuring Brian Kemp and Raffensperger to verify the signatures on Georgia’s mail-in ballots even though he’s been told repeatedly that (a) the signatures on the ballots were verified twice upon receipt and (b) once the ballot inside is separated from the envelope there’s no way to locate and disqualify that ballot if a case of fraud is found. (Which is why Georgia takes care to verify the signature before the envelope is opened, of course.) Raffensperger ordered the audit in Cobb County to appease him. By examining a large enough sample to produce a statistically significant result, the state would gain some sense of whether there were flaws in the initial verification process. Mark Meadows even flew down to Georgia while the audit was happening to check up on how things were going. Result: No fraud in 15,000 examples.

When are we going to be allowed to do signature verification in Fulton County, Georgia? The process is going VERY slowly. @BrianKempGA Pennsylvania just found 205,000 votes more than they had voters. Therefore, we WIN Pennsylvania!!!

Maybe the big steal happened in Fulton County rather than Cobb County? If not in either, then surely in some other county. The president began this process with a conclusion — “If I lose, it can only have been because of cheating” — and has spent the last 57 days reasoning backwards from it to try to find malfeasance.

Needless to say, it’s also not true that Pennsylvania had 205,000 more ballots than it had voters. He’s getting sloppier with his accusations as we get closer to Inauguration Day and his grasp on power slips. A perfect example from last night:

…The consent decree signed by the “Secretary”, with the consent of Kemp, is perhaps even more poorly negotiated than the deal that John Kerry made with Iran. Now it turns out that Brad R’s brother works for China, and they definitely don’t want “Trump”. So disgusting! #MAGA

The bit about “finding the crime” is exactly what I mean about reasoning backward from a conclusion, but never mind that. Focus on the sensational claim about Brad Raffensperger’s brother instead. There *is* a guy named Raffensperger who works for Huawei and evidently that bare fact was enough to jumpstart a rumor in MAGA media over the past few days that he and Brad Raffensperger are siblings and thus Trump’s defeat in Georgia on November 3 can only have been a sinister Chinese communist plot. But it turns out to be nothing more than a coincidence. Brad Raffensperger doesn’t have a brother. Yet somehow this very easily checkable claim made it from crank online media to Newsmax and ultimately into the president’s Twitter feed, where it’s been visible to the entire planet for the past 11 hours:

That bullshit story Trump tweeted about the Georgia Secretary of State Brad Raffensperger's brother working for a Chinese company was spouted by Dick Morris on Newsmax last night (he doesn't have a brother). pic.twitter.com/kjFymyZWaw

Just propaganda on top of propaganda, amplified unthinkingly by the head of state because he can’t cope psychologically with having narrowly lost an election and will cling to any reed offered to him that might support a fraud conspiracy, no matter how thin.

The fallout in the upcoming Senate runoffs from this sustained campaign to convince Georgia righties that their elections can’t be trusted remains unpredictable. I don’t buy this poll…

…but the fact that a righty outlet like Trafalgar is also seeing movement towards the two Democrats should concern the GOP. Early voting clearly favors the Dems: “Huttman said his analysis showed Democrats on pace to bank about 80 percent of the early vote they received in November, while Republicans were only on pace to bank about two-thirds of their early vote.” The fact that nearly 90,000 people who didn’t vote in the general election have already voted in the runoffs, and that they’re disproportionately African-American, is another ominous sign. Read Erick Erickson for a shot of confidence that David Perdue and Kelly Loeffler will come through in the end, as he’s convinced that the Democratic early vote is just a case of them cannibalizing their Election Day vote. (Mostly, perhaps, but not entirely per that 90,000 figure.) The question is whether Republicans will show up on January 5 or whether a meaningful number will have been convinced by the likes of Lin Wood that it’s pointless at best and destructive at worst to participate in such a supposedly corrupt electoral system.