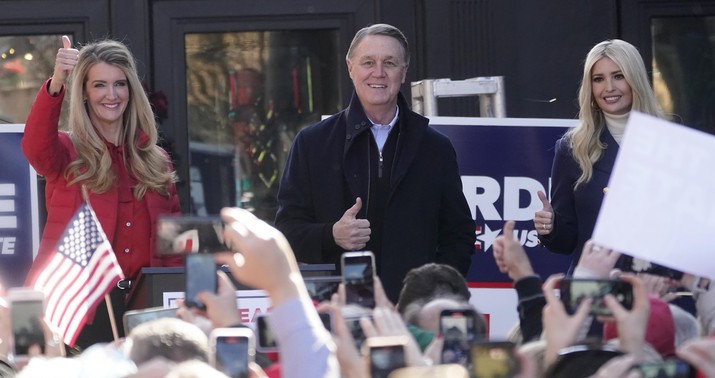 I have good news and bad news. The good news is that Trafalgar’s final poll of the presidential race in Georgia was way off so there’s no need to take this one too seriously.

The bad news is that their presidential poll was way off *in Trump’s direction.* Trafalgar saw him beating Biden by more than four points. If they’re overestimating GOP support in Georgia by that much, it means Loeffler and Perdue may be in even more trouble than we think.

This isn’t the only poll out there right now showing the two Democrats ahead, either. But because Trafalgar is so well known for Trump-friendly numbers, the fact that they have the two Republicans trailing feels shocking.

Two weeks ago Trafalgar had Perdue up two points on Ossoff and Loeffler up six(!) on Warnock. Now they’re both behind. They’re behind in the RCP averages too, with Ossoff leading by 0.8 points and Warnock ahead by 1.8. (The FiveThirtyEight averages are basically ties, with less than half a point separating the candidates in both races.) Each contest is destined to be a coin flip next Tuesday, but given the stellar Republican track record in Georgia runoffs, 50/50 seems … sweaty.

The early voting indicators are ominous, also per FiveThirtyEight:

We do have some clues about who has voted thanks to demographic information in the voter file: namely, voters’ race. Voters so far in Georgia are 55 percent non-Hispanic white, 32 percent non-Hispanic Black and 13 percent of other races (or of unknown race). That’s a more diverse electorate than at this point in the general election, when, according to The New York Times/Upshot’s Nate Cohn, fewer than 30 percent of early voters were Black. At first glance, that might seem like a good omen for Democrats given their strength with Black voters. And there are other rosy signs for Democrats in the early-voting data too, like turnout being lowest in two heavily Republican congressional districts in north Georgia.

That includes 80,000 people who didn’t vote in the general election. Biden’s final margin in Georgia was less than 12,000 ballots. More from Nate Cohn:

FiveThirtyEight goes on to note that of course we shouldn’t read too much into early turnout since it could be that Republican voters are preparing to turn out en masse in person on Election Day. But the wrinkle in that theory is that the president has spent the better part of two months telling his fans there that Georgia’s in-person voting machines can’t be trusted. Lin Wood, the right’s new populist hero, has done him one better by insisting that Republicans can prove that the machines were rigged against Trump on November 3 by boycotting the Senate runoffs on January 5. Righty populists have special reason not to turn out and use Dominion’s machines next Tuesday, in other words. The big red Election Day wave may not show this time.

In fact, there’s already some evidence of that. Read this thread for two surprises from the early voting data in Georgia. One is that Republicans in some deep-red districts are making greater use of mail ballots this time than they did in the general election. The other is that early voting *in person* in some Republican districts is down. That is, it may be that the conspiracy theories about Dominion have convinced some meaningful number of Georgia Republicans that absentee voting is the more trustworthy option when the only alternative is Dominion voting machines — which, if so, would augur poorly for turnout next Tuesday.

Or it could be that Wood has successfully persuaded a number of Republicans not to bother voting at all this time. Not great either way.

The other X factor besides the “stop the steal” nonsense that may be depressing GOP turnout is the ongoing stimulus saga. Republicans in Washington are at war with each other, with the nationalist faction led by Trump demanding $2,000 COVID relief checks and the fiscally conservative faction led by McConnell looking to stick with $600. Loeffler and Perdue have now each sided with Trump on that issue, believing that they have more to fear from angering Trump’s fans in Georgia than they do from angering whatever small contingent of “small government” righties remains in the state. But maybe the damage is done: Ossoff and Warnock spent the past week hammering them for not supporting $2,000 checks and it’s unclear right now whether McConnell will allow a floor vote on the House bill. What happens if Cocaine Mitch manages to snuff the push for big checks right before the Georgia election, with Trump tweeting stuff like this?

Unless Republicans have a death wish, and it is also the right thing to do, they must approve the $2000 payments ASAP. $600 IS NOT ENOUGH! Also, get rid of Section 230 – Don’t let Big Tech steal our Country, and don’t let the Democrats steal the Presidential Election. Get tough! https://t.co/GMotstu7OI

Will voters blame Loeffler and Perdue if the Senate GOP manages to block Trump on this even though the two support the president’s call for two grand apiece? Raging intraparty battles aren’t normally great for election turnout. On the other hand, whom will they blame if McConnell introduces a single bill incorporating all of the things Trump asked for — $2,000 checks, repeal of Section 230, and some sort of formal investigation of voter fraud, and Senate Dems end up blocking it because of its poison pills? Whom would *Trump* blame in that situation? Schumer, for refusing to agree to all of his demands? Or McConnell, who could probably get the $2,000 checks passed if only he put them in a separate “clean” bill and offered that for a vote?

Hard to say. But since Ossoff and Warnock have been flogging Republicans for not supporting $2,000 checks, I’d guess that any outcome in which the checks don’t pass isn’t great for Republican turnout in Georgia and/or *is* great for Democratic turnout there.

I’ll leave you with this, which made me chuckle. It’s funny because it’s (possibly) true.

“…we are witnessing the systematic attempt to destroy Uighurs by the Chinese party-state.”