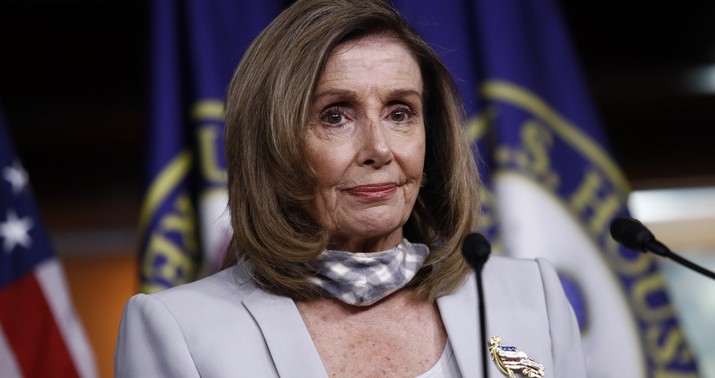 I don’t understand. Where’s this coming from?

It’s not because she deliberately tanked a desperately needed COVID stimulus to try to hurt the other party at the polls, is it?

Or because she thinks COVID social distancing rules were made for commoners, not for her?

Or is it because she’s turned increasingly Trumpy in attacking her political opponents? “I’m counting down the hours ‘til he’s gone,” she reportedly said of Trump to the House Democratic leadership this weekend. “I plan to pull him out of there by his hair, his little hands and his feet.”

I for one think this country owes more respect to a figure who managed to nearly fumble away the House majority on a night when the guy at the top of the ballot for her party was getting more votes than any person in American history.

Especially this year, the 500th anniversary of her becoming leader of the House Democratic caucus.

A new POLITICO/Morning Consult poll shows most Democrats think she should keep the gavel, but a majority of voters oppose Pelosi staying on as speaker. Only 31 percent of all voters think Pelosi should be elected as speaker when the new Congress begins, while 56 percent think she should not.

But self-identified Democrats say the first woman House speaker should stay on by a 20-point margin, 53 percent to 33 percent…

When Democrats assumed control of the House two years ago, 15 Democratic members defected from Pelosi, choosing another individual or voting “present” during the speakership vote. Of those, 10 are returning members of the Democratic caucus, and Pelosi will only be able to lose a handful of votes to clinch the speakership this time, depending on how many members show up.

How is she still 20 points above water among Democrats after the debacle of November 3? This woman had an honest-to-goodness “let them eat cake” moment on national television in the middle of an economic collapse, for cripes sake:

Pelosi has more money than the entire populations of some housing projects in the US. Is showing off your 15 flavor ice cream collection in extremely expensive appliances meant to be reassuring to people fighting 15 bill collectors during a pandemic & struggling to buy food? https://t.co/mn4bvUuEiO

Politico notes that Pelosi’s 65 percent favorable rating among Democrats is quite a bit better than Mitch McConnell’s 48 percent rating among Republicans even though McConnell hasn’t caused Trump any real trouble, has succeeded wildly alongside the president in stocking the federal judiciary with conservatives, and will have managed to hold the Senate majority through four straight election cycles assuming Kelly Loeffler or David Perdue win on January 5. Why is that? Why should Pelosi be more popular with her own party despite her failures than McConnell is among Republicans despite his successes?

I think it’s a combination of a few things. As the first woman Speaker in U.S. history, Pelosi is a Democratic legend to a degree that Cocaine Mitch simply isn’t within the GOP. Her signature accomplishment as Speaker, ObamaCare, is also more influential than any single piece of legislation shepherded through Congress by McConnell, although I’d argue that his focus on stacking the federal bench with conservative judges will influence the country long-term more than O-Care will. Democrats may also look more fondly on Pelosi than Republicans do on McConnell because they suspect her time as leader is short. She’s said before that she’ll step down as Speaker in 2022, a decision that midterm voters will probably force on her anyway. McConnell was just reelected to a six-year term and could outlast the Biden presidency in his job. It’s highly unlikely that Pelosi will in hers.

But beyond all that, I think it’s a simple matter of the GOP operating nowadays as two distinct parties under one banner to a greater degree than Democrats do. When push came to shove in the primaries this year, the hard-left rebels in Nancy’s party were no match for the mainstreamers. Berniebros thought they were poised for a takeover after their guy won New Hampshire and Nevada and then Biden steamrolled them in South Carolina and never looked back. When right-wing rebels launched their own insurrection in the 2016 primaries, things went differently: Trump swept aside the prevailing zombie-Reagan orthodoxy and squashed a host of A-list tea partiers. Ever since, the GOP has existed uncomfortably as a coalition of Paul Ryan Republicans and Trump Republicans, conservatarians and nationalists, each deeply suspicious of the other but *usually* willing to make common cause to defeat the Democrats. (Not on election night this year, though. Or at least, not at the top of the ballot.) The Trump wing of the party tolerates McConnell but recognizes him as a foreigner, an old-guard champion of Ryan-style Republicanism with little interest in the culture-war fights they relish. My sense is that the left doesn’t view Pelosi quite as suspiciously despite her corporatist pedigree and very luxurious lifestyle. They recognize that she’s old news, but either there aren’t enough of them to really undermine her or they don’t regard her as culturally foreign to the same extent righties do McConnell. Either way, she’ll probably get two more years as Speaker and then go down with the ship in the midterms.

“There were literally 85-year-old, 90-year-old people standing there in tears…”

Actually, a censure resolution for Trump in addition to impeachment isn’t a bad idea

Move the Olympics from Tokyo to Florida?

Can’t see how this could go terribly wrong

Harry Reid: Come on, Manchin will cave on filibuster “before too long”