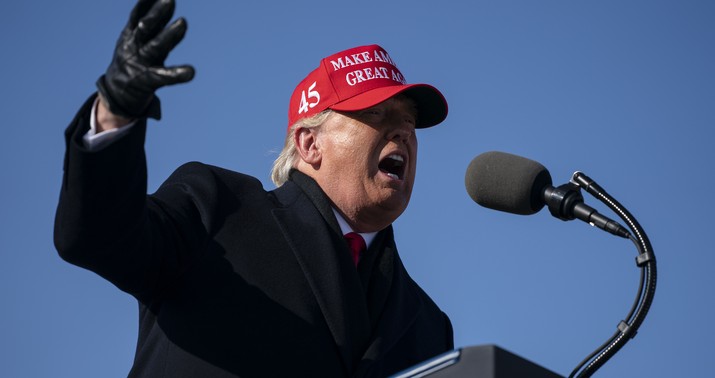 I’m having a hard time grasping how Tuesday night could have been a “repudiation” of a guy who performed about four points better than the national polling, helped his party retain the Senate and make gains in the House, and got the highest share of nonwhite voters by a Republican president in decades. (At least if the exit polls are right. Who knows?) In a “repudiation” scenario, one would think we’d have known the winner of the election within an hour or two after polls closed. As it is, it’s Thursday afternoon and things are still — a little — in doubt.

What kind of repudiation involves the losing candidate winning five million more votes than he did the first time he ran, even allowing for population growth among the electorate in the interim?

Maybe I’m having trouble with the concept because I’m a Never Trumper. For that group, the takeaway from this election is clear and it emphatically does not involve a repudiation. To be repudiated, Trump would have had to lose by such a margin that he wouldn’t have bothered trying to claim voter fraud; the numbers would have made it seem too silly. Instead he would have said he was “cheated” by the deep state, the Russiagate probe, the media, Never Trump “human scum,” COVID — all the old familiars. The vote count was accurate, he would have allowed, but voters’ opinions of him had been so warped by his enemies that the result could hardly be deemed “fair.”

That’s not where we are today. Biden’s margins are small enough that Trump’s going with the voter-fraud con after all. Not much of a repudiation.

But read John Podhoretz on this subject for a different view. It’s not about Biden’s margins, says J-Pod, it’s about the fact that Biden himself was a totally lackluster candidate who ran a strategically lackluster campaign, scarcely discussing policy and on many days not even venturing out of his home. He genuinely does seem to be in cognitive decline, if not as advanced as partisan righties would have everyone believe. Yet he’s all but certain to become the first challenger to oust a sitting president in nearly 30 years, and in so doing will receive the most votes by any political candidate in the history of the United States. Democrats nominated the equivalent of a canned ham and that ham is on the verge of sweeping the Rust Belt, flipping Georgia, and turning Goldwater country in Arizona blue. Why?

Because a gigantic number of Americans detest Donald Trump and would vote for a canned ham to get rid of him, says Podhoretz. That’s a repudiation.

There’s little or no enthusiasm for the man, and there shouldn’t be. He didn’t encourage any. In the primaries, Biden ran as the milquetoast; the most inoffensive major candidate. And he didn’t change much in the general, which is the point. His goal was to be… nothing. A flat surface.

He just wasn’t Donald Trump—and that proved to be enough to generate 80-plus million votes.

That followed a 2018 election in which 62 million Democrats cast ballots and flipped the House blue—9 million more than Republicans and a level of turnout for a midterm the likes of which we’ve hardly ever seen.

In my view, just as Trump’s brash willingness to defy political convention and his addiction to outrageous behavior won him his party’s nomination and arguably the election, they also created a movement against him of incomparable size and power.

Podhoretz goes on to note that Trump’s apparent defeat wasn’t mirrored by sweeping losses for the GOP downballot. On the contrary, Republicans gained seats in the House and look set to hold the Senate. Never Trumpers would argue that that’s the whole point — in a true repudiation, the entire party would be reduced to ashes for having enabled Trump so obsequiously. But from J-Pod’s perspective, the fact that Trump himself was practically the only Republican of any renown to lose, and to an underwhelming opponent no less, means that voters’ wrath was aimed squarely at him.

For all the justifiable hype about the turnout generated by the GOP and its fantastic ground game, which ended up crushing the expectations created by the polls, Democrats still managed to top them. They uncorked the biggest turnout in American history — and it was all for Trump. Is that a “repudiation”?

It’s not crazy to think so, is it?

Here’s a tweet making the rounds today. It’s not just that downballot Republicans won while Trump (apparently) lost, it’s that in some cases they got more votes in their own districts than he did. Some small but meaningful share of voters who favor the GOP generally — Never Trumpers, presumably — withheld their votes from him but not for other members of the party. And that may have been decisive in the presidential race:

If you're looking for how Trump could have won WI (or why he lost), look no further than his underperformance of Republican Congressional candidates in 6 key Southeast Wisconsin counties. pic.twitter.com/Nj1leCJnF5

If everyone in those counties who voted Republican in their House race had voted a straight red ticket, Wisconsin would probably be in Trump’s column today. That’s part of the case for “repudiation” too.

Today at NRO Michael Brendan Dougherty imagines the GOP as essentially two parties, a large Trump party and a smaller Paul Ryan party. Voters from each party will turn out to support candidates from the other, by and large, but a “Trump” candidate will perform worse among “Ryan” voters and vice versa. Roth’s tweet above suggests that a cohort of “Ryan” voters did indeed want to repudiate Trump — and did so very successfully. Meanwhile, “Trump” voters turned out en masse for their guy but had no reason to repudiate the generic “Ryan” candidates downballot so they voted a straight ticket. Result: Generic GOP wins big via a Trump/Ryan fusion while Trump himself loses narrowly by having thoroughly alienated certain Ryan voters.

In 2016, the prospect of Hillary Clinton made for a nearly unanimous and unified front of the Paul Ryan party and the Donald Trump party.

In 2018, the Paul Ryan party ran for their House seats, having passed a Paul Ryan tax cut, and they got wiped out.

But, without Hillary Clinton, many Paul Ryan party people did not mark their ballot for Donald Trump. Or they did, but in places not well-distributed to help Donald Trump.

That’s about the size of it. Give certain Ryan voters a choice between Trump and a canned ham and it’s ham leftovers for dinner for the next four years.

Ed made an excellent point to me earlier, that the two Senate runoffs in Georgia in January will be a fascinating test of whether the election was a repudiation of Trump. “Ryan” voters will be out in force for David Perdue and Kelly Loeffler. Will “Trump” voters, especially if their guy is a lame duck at the time? What about if Trump campaigns aggressively for the two candidates? Or will the GOP be united in this case no matter what because these races look set to decide control of the Senate? If Loeffler and Perdue do several points better in the runoff than Trump did in Georgia, that’ll become part of the case that Tuesday night was a “repudiation” of Trump. We’ll see.