AOC: Pelosi must go — but there’s no one to take her place 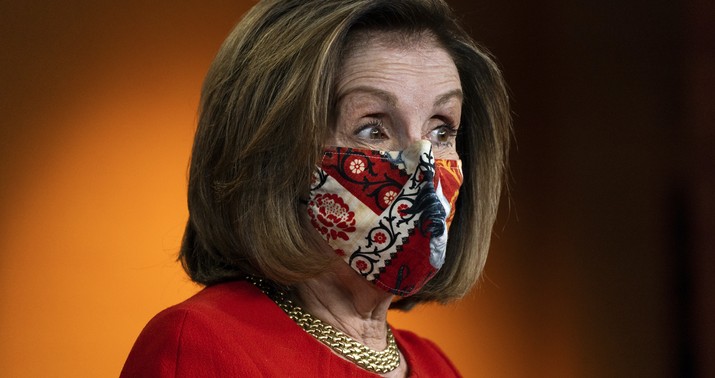 She’s wrong about so many things. So very, very many.

The news value in this critique is simply that it’s AOC making it, not the substance of the critique itself. For years now, House Democrats have grumbled sotto voce to reporters about the stranglehold on leadership maintained by the geriatrics in their caucus. It’s been Nancy, Steny Hoyer, and James Clyburn at the top for ages, leaving ambitious next-gen backbenchers with few opportunities to learn the ropes of how to manage a caucus. Who can blame someone like Cedric Richmond for bailing out of Pelosistan, knowing his path to the top is blocked, and taking a job with the Biden White House instead? Who would fault Ben Ray Lujan, a potential Speaker of the House, for throwing in the towel and running for Senate instead?

It’d be bad enough if the Dem House caucus was a monarchy, with everyone waiting around for decades for Pelosi to give up the throne. But in light of the immense power that leaders of both caucuses wield over legislation, it’s really more of a dictatorship. No wonder rank-and-file members of the House spend so much time fundraising. What else do they have to do with their time except wait for Pelosi to airdrop some new bill onto the House floor and then be asked to give thumbs up or down?

AOC’s had enough, understandably. The wrinkle is that, because Pelosi has ruled for ages, no one in the caucus has developed the skills to succeed her. What do they do in 2023 when she steps down?

Ocasio-Cortez argued that there are no viable alternatives for House or Senate leadership at the moment because the caucus’s current leaders spent a number of years concentrating power without any “real grooming of a next generation of leadership.”

“A lot of this is not just about these two personalities, but also about the structural shifts that these two personalities have led in their time in leadership,” Ocasio-Cortez said. “The structural shifts of power in the House, both in process and rule, to concentrate power in party leadership of both parties, frankly, but in Democratic Party leadership to such a degree that an individual member has far less power than they did 30, 40, 50 years ago.”

This dynamic is what pushes the “really talented members of Congress that do come along” to leave or run for statewide office instead. But Pelosi has also indicated that this upcoming term could be her last, “and the left isn’t really making a plan for that either,” Ocasio-Cortez added. “So I do think that it’s something that we really need to think about.”

She’s not angling to replace Pelosi herself. (“The House is extraordinarily complex and I’m not ready.”) For one thing, a 31-year-old who’ll be in her second term next year isn’t about to leapfrog colleagues who’ve been there for decades, patiently waiting for the queen to abdicate. For another, she’s too far left. We just got through an election, you may recall, in which Republicans held the Senate and nearly took back the House thanks to high-profile left-wing messaging about socialism and defunding the police scaring the hell out of voters. Making AOC Speaker, knowing how that would play in swing districts, would amount to mass political suicide by the House Dems who chose her.

Note what she says too about the “structural shifts of power in the House.” Members of both parties have complained about that for years. The way Congress is supposed to work is that a bill comes to the floor, it’s debated, amendments are offered by members, bargains are struck, and the final product is a glorious messy compromise that everyone can grudgingly live with. The way it actually works is that the Speaker negotiates with Senate leaders on something that she believes can pass and then that bill comes to the floor in take-it-or-leave-it fashion, with members expected to rubber-stamp it. We’re seeing this play out right now with the interminable COVID stimulus negotiations. The most leverage a member can exercise over the final product is to inform the Speaker that they won’t support a bill that lacks a certain provision — as AOC did last night — and let the Speaker factor that into her vote-tallying. Justin Amash has grumbled about this on the right and did so again last night in responding to Ocasio-Cortez:

Imagine if leaders would just let us take votes on various amendments as though we were an actual legislature. You’d have some ideas. I’d have some. Others would have some. And then the House—and ultimately Congress—would come to some consensus through a representative process.

Amash is retiring and AOC has toyed with retiring. It’s no fun living in a dictatorship.

By the way, in this same interview she called it “horrible” that Biden is stocking his cabinet with Obama-era retreads. “I think what a lot of people fail to remember is that we now have a Biden administration that’s bringing back a lot of Obama appointees, but when Obama was making appointments, he was bringing back a lot of Clinton appointees,” she told The Intercept, correctly. A WaPo analysis published over the weekend found that around 80 percent of nominees announced by Biden so far have an Obama credential somewhere on the resume. And while Biden’s nominated a number of women and minorities, they too have tended to be older and alumni of the Obama administration. It’s the same problem as in Pelosi’s caucus: Where do younger Democrats go to shape policy if they’re locked out of influence in the House and they’re locked out of influence in the White House?

“We cannot move forward in a new direction with just the same people including some of the people who are responsible for the mess we are in,” said Evan Weber, the political director of the Sunrise Movement, a liberal group focused on climate issues. “We would like to see more young progressives in roles in the Biden administration.”…

“There’s more appointments of color, but there is a lot of same old, same old,” said Sayu Bhojwani, a pro-immigration activist and president of New American Leaders, a group that pushes for more diversity among elected leaders. “Having voices of color who have kind of grown up in a system that wasn’t built for people of color means that we’re not going to get innovation and we’re going to get people who are risk averse because they know the system.”

Biden’s doing his best to satisfy all constituencies in terms of meeting racial and gender quotas although it’s ultimately an impossible task. “There were no people of color among those announced as Biden’s chief of staff, deputy chief of staff, communications director, press secretary, or legislative affairs director,” Politico noted on Monday. But his big vulnerability has been and remains the dearth of loud-and-proud progressives in his inner circle. The position of labor secretary coveted by Bernie Sanders could be his solution to that problem. I wonder if the public carping by lefties like AOC about his cabinet picks is really just a way to put pressure on him to nominate Bernie. Stay tuned.