Birx quits: The accusations this week have been very hard on my family so I’m retiring after the transition 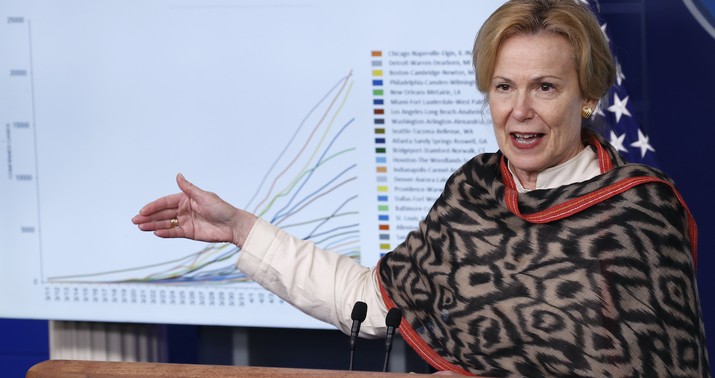 Ah, man. Normally I don’t care when a public servant decides they don’t like their job but I feel bad about this one. Watch:

EXCLUSIVE: Dr. Deborah Birx tells @newsy that she is willing to help with the #Biden transition but ultimately plans to retire, citing her family's treatment over the past week. pic.twitter.com/yEPy9s0Tf9

I can’t tell if that’s a sincere “I’ve had enough” statement or if it’s more like, “I’ve had enough — unless you really want me to stay on forever, Mr. President-elect, in which case I’ll be honored to serve.” Is it a sympathy play to try to get Biden on her side? “I want to ensure the transition goes well, meaning I will stay as long as needed and then retire,” she wrote today in a statement, per Politico. Hmmmm.

The part in the clip about her elderly parents being “very depressed” is a gut punch, though.

Read this post from yesterday if you missed it for essential background. I repeat what I said there: I’m just not sure that Birx did anything wrong when she went to Delaware with members of her family after Thanksgiving. Yeah, I know that she told people not to travel, but the fear about Thanksgiving get-togethers this year had nothing to do with travel per se. It had to do with different households mixing, allowing the virus to leap from one to another. That’s how we get community spread. Obviously she didn’t mean that people from the same household shouldn’t “travel” to the park or the beach together or even to a vacation home somewhere. As long as your own household is isolating from everyone else’s, you’re not contributing to the virus’s propagation.

It wasn’t clear from yesterday’s AP story whether Birx violated that guidance or not. She and her husband own two homes, one which they live in and one which her parents, daughter and son-in-law, and their kids live in. Birx interacts regularly with them, it seems, which makes me suspect that they’re all in the same quarantine bubble together, essentially a single household spread out over two buildings. If that’s true then her family trip to Delaware to visit her third home, a vacation property, didn’t actually break any rules. In fact, Birx told Fox News yesterday that she avoided her usual Thanksgiving celebration this year because she didn’t want different households mixing.

“Like many Americans, I am the sole caregiver for my parents,” she said in a statement to Fox News. “They live with me in my immediate household in Potomac, where my daughter and her family reside as well. We are all supporting each other and providing for each other during this difficult time.”

She added: “We did not hold the usual Thanksgiving dinner we have every year which includes 30-40 members of my extended family. In fact, I did not hold a Thanksgiving celebration whatsoever this year. My trip to Delaware after the Thanksgiving holiday solely focused on preparing the property for a potential sale. Members of my immediate household assisted in that as well.”

What’d she do wrong? If she’s telling the truth about her daughter and her parents and her grandkids all being part of the same household, i.e. in a bubble together that excludes other households, what rule did she break, exactly?

The only wrinkle in this that I can see is the fact that her son-in-law’s mother also sometimes visits the house where Birx’s parents live with her daughter and grandkids. Birx told the AP that she and that woman haven’t seen each other in months; they’re never in the home at the same time. But of course, that woman could be bringing in the virus and putting people in the home at risk *unless* she’s in the extended “bubble” too. Is she?

The reason I feel defensive on Birx’s behalf — a little defensive, as she’s not blameless in America’s COVID ordeal — is that she’s not a politician. She didn’t strive to be part of America’s embarrassing political circus. She’s a doctor who was drafted into the fight against a once-in-a-century virus managed by a shambolic White House and, I think, earnestly did her best to try to help. She had to negotiate Trump’s moods, a no-win situation in which she’d either be attacked by the left as an apologist if she didn’t criticize him or attacked by the right as disloyal if she did. She went from leader of the government’s COVID response to answering to Scott Atlas, a doctor with no background in virology who seems to have surmised that the surest way to defeat COVID was to let most of the population get it. Atlas was finally dismissed, clearing the way for Birx to exert some new influence over containing the virus at a moment when the pandemic is the worst it’s ever been — whereupon she had a hit piece dropped on her by the AP dragging her children, grandchildren, and elderly parents into the fray. I can only imagine the sort of moronic death threats she’s gotten over the past 24 hours about “deep state” doctors not following the rules they set for others.

If she really did break her own rules then she should quit for having set a bad example, but as I say, I’m not sure she did. And I do think she tried to make things better for the country. Good intentions count. Pity anyone who tries to do right by this failing country and has to navigate its relentlessly obnoxious, irredeemable political culture to do it. Maybe Biden will give her a chance.