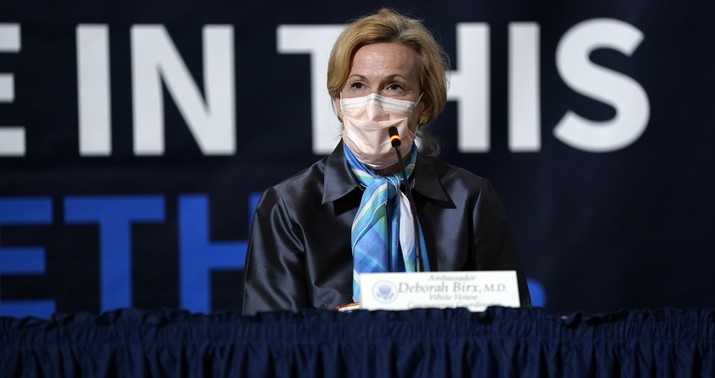 One of the saddest, and funniest, stories I’ve read all year. It’s not news that Birx has been on a national tour of sorts, stopping by universities and other hot spots in hard-hit states to deliver a local forecast on COVID. But it was news to me that the White House didn’t send her on the tour.

She just sort of … left, according to CNN. Packed up and hit the road. It’s not even clear to me after reading whether her travel expenses are being paid by the government or if she’s footing the bill herself.

Allegedly she got tired of being lectured about her own specialty, infectious diseases, by some rando radiologist whom Trump plucked from the C block on Fox News. So she’s running her own one-woman task force road show now.

So many questions. When will it end? Are the presentations she’s making useful to the people she’s meeting with, or are they just various iterations of “wear a mask”? Are local health authorities conferring with her because she has data that they don’t or is it more just an opportunity to gladhand a minor government/science celebrity?

Does she sign autographs of the epidemiological curve before departing or nah?

Dr. Deborah Birx emerged from a meeting at the White House one day in late summer with a new resolution: Never again would she sit in a meeting with Dr. Scott Atlas and listen to him pontificate on the pandemic.

That’s when she went all-in on a plan to essentially abandon the White House and avoid the growing influence of Atlas, a radiologist with no expertise in epidemiology who was nevertheless rising in influence with President Donald Trump…

After that August meeting, she came out of the room and told a friend Atlas was “not going to tell me what to do,” the friend said, recounting the conversation.

She’s traveling to localities to counterprogram Trump and Atlas, essentially. “If she can’t get it done in the White House, the way to do it is go into the field and use personal diplomacy to convince politicians there is a right way to do this and a right way to approach things, and the consequences of failure are significant,” said one Birx friend to CNN. I’d be curious to know whether her visits are focused more heavily on red states, where the local governments are under greater political pressure to follow the White House’s ingenious plan to overcome the virus by letting everyone get it.

Here’s a fun bit from later in the story, when CNN asked its sources how Birx felt during Trump’s infamous riff at a briefing earlier this year about cleansing the body internally with some sort of disinfectant: “My wife and I both worked for her, and we’ve known her for a long time. When we saw that look on her face, it was a look we’d seen before when people in charge make outrageous statements. She doesn’t say anything, but we know the look on her face, and it was exactly déjà vu. But what do you do when the president talks about injecting bleach?”

Is … this the look he means?

I think that’s the look. CNN goes on to wonder whether Biden would keep Birx on his own COVID task force if he wins next week but there’s not a shred of doubt that the answer is yes. Drop-kicking Atlas off the White House grounds and restoring Birx and Fauci to public prominence would be the single most visible thing he could do early on to signal that his approach to the pandemic will be drastically different from Trump’s. I can only assume that’s why Birx hasn’t already quit and lit Trump and Atlas on fire in the media. She thinks the situation is about to improve dramatically and wants to be there when it does. And unlike Fauci, who continues to make himself available for TV interviews where he’s invited to criticize the president, she hasn’t antagonized Trump to the point where he might be inclined to fire her after Election Day.

Speaking of Atlas and the task force, Politico reports today that under his leadership the group is now as useful as a pile of wet garbage:

Once a driving force behind the White House’s coronavirus messaging, the group hasn’t held a collective press briefing in months. Inside the West Wing, task force members’ growing alarm over the virus’ resurgence has gone largely ignored. And among health officials on the front lines, there is mounting consensus that the federal government has little new aid to offer – leaving states to face the pandemic’s third and potentially worst wave increasingly on their own.

“There’s not any acknowledgment or appreciation of the severity of the surge,” said an official in one governor’s office long frustrated with the federal response. “The stark reality that we’re facing is the White House – from top to bottom – has stopped governing and is only campaigning.”…

“There is no task force. It’s not serving any role at all,” one Republican close to the task force said. “You’ve got a bunch of very thoughtful, intelligent people who want to contribute twiddling their thumbs.”

Pence, the nominal leader of the task force, reportedly hasn’t attended a meeting in more than a month. Although, in his defense, what purpose is the group supposed to serve at this point with Atlas as its de facto leader? People like Birx, Fauci, and CDC chief Robert Redfield clearly view him with contempt; it’s hard to imagine that the other infectious disease specialists who are advising the White House think much more highly of him. Meanwhile, Atlas’s shtick is that testing is overrated and that we shouldn’t worry so much about healthy people being infected, in which case there’s not much for the task force to do under his supervision except lean back and let the herd immunity — and bodies — pile up. Might as well formally disband the group altogether. It’d be a nice exclamation point on how the White House has handled COVID.

In lieu of an exit question, read this second CNN story about Atlas’s meeting of the minds with Florida Gov. Ron DeSantis on … slowing testing down, especially for asymptomatic people who’ve been in close contact with someone who’s tested positive. CNN notes that since Florida’s summer wave struck, testing there has fallen off — a lot.

There’s nothing necessarily sinister about that; as you can see, the positivity rate has been flat lately, not increasing. But compare New York, which has had rock-bottom case counts for many months but continues to build out its testing, from around 100,000 per day a month ago to 120-150,000 per day now. CNN insinuates that maybe DeSantis wanted to “slow down” testing to accommodate Trump’s talking point that America only has more confirmed cases because it tests more than other countries. (Which is not true.) Slowing down testing would also provide cover to reopen schools by generating an artificially low number of daily cases, easing parents’ worries about in-class instruction. And of course a lower number of cases in Florida would also be better for Trump’s reelection chances by convincing locals that the pandemic is under control. But again — if infections were spreading rapidly in Florida, we should see a higher positivity rate given the smaller number of tests. And we’re not seeing that. So what’s going on?