Expert to NYT: We could “level the playing field” by vaccinating essential workers before seniors since seniors are “whiter” 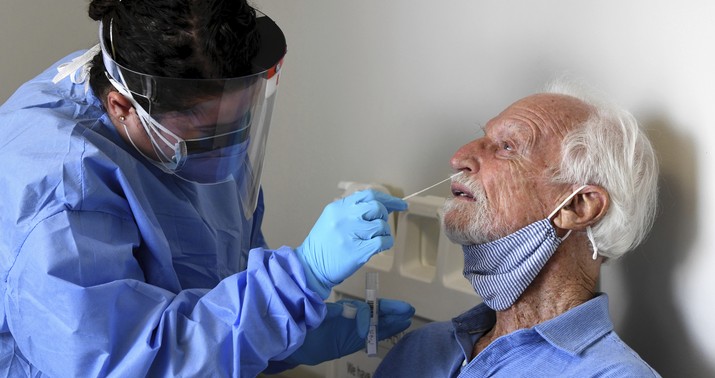 I remember writing in July about the debate among experts over how much race should count when prioritizing groups to receive the vaccine once it arrived. Some wanted to make it one of many factors in measuring a recipient’s priority, mindful of the fact that minorities have died of COVID at a higher rate than whites. Others wanted to prioritize by race itself, a morally — and legally — dubious approach. “If you liked woke epidemiologists when they were carving out massive exceptions to social-distancing rules for BLM protests,” I wrote at the time, “you’re going to love them when they’re sending black and Latino Americans to the front of the line for the miracle drug amid a winter second wave of COVID that’s cutting a swath through the American populace.”

We’re in that wave now and the swath is being cut, but the debate goes on. No one’s talking about prioritizing by race at this point — not overtly, anyway. But race is creeping into the calculations over whether to make senior citizens or essential workers the next priority once medical workers and nursing-home residents are vaccinated. There are logical racially neutral arguments for each. Seniors are at the greatest risk of dying, of course, but essential workers who are face to face with the public every day are probably the biggest risk to spread the virus in the community. Immunize them and you might get more bang for your vaccination buck by closing off an outsized number of transmission vectors, slowing the contagion.

Percentage-wise, there are more minorities working front-line jobs as essential workers than there are among senior citizens. Which is why, for certain wokesters, the “seniors or essential workers?” conundrum remains a vehicle with which to pursue a sort of very rough racial justice. This NYT piece, now almost two weeks old, made the rounds last night after a producer on Samantha Bee’s talk show of all places found himself aghast at some of the quotes gathered from racially conscious experts. Even liberals are choking on the logic of deprioritizing senior citizens *because* they’re whiter as a group than essential workers.

But that’s what some are proposing.

Harald Schmidt, an expert in ethics and health policy at the University of Pennsylvania, said that it is reasonable to put essential workers ahead of older adults, given their risks, and that they are disproportionately minorities. “Older populations are whiter, ” Dr. Schmidt said. “Society is structured in a way that enables them to live longer. Instead of giving additional health benefits to those who already had more of them, we can start to level the playing field a bit.”

An “expert in ethics,” huh?

If you’re 75 years old and white with comorbidities, take heart in the fact that you helped “level the playing field” when they’re sliding that ventilator tube down your throat. The quote above is the most repulsive in the Times piece because the racial logic in prioritizing is so explicit, but race factored into other experts’ calculations too. For instance:

Marc Lipsitch, an infectious-disease epidemiologist at Harvard’s T.H. Chan School of Public Health, argued that teachers should not be included as essential workers, if a central goal of the committee is to reduce health inequities.

“Teachers have middle-class salaries, are very often white, and they have college degrees,” he said. “Of course they should be treated better, but they are not among the most mistreated of workers.”

Again, the logic of vaccinating essential workers early is *supposed* to be that they’re in contact with so many people during the day that they risk becoming superhighways of transmission for the virus once infected. Immunize them and you close down those superhighways. The question in vaccinating teachers soon should be, plainly and simply, will we get extra “bang for our buck” in doing so? To which the answer is no, I think. Schools are actually safer than the community at large based on the data we have. There’s a stronger argument for prioritizing waiters, economically and epidemiologically.

That’s why we should hold back on teachers, not because they’re “very often white.”

We’re still not done with racial arguments from the Times piece. Another expert, economist Elise Gould, argued that teachers *should* be given vaccine priority — because minorities suffer more from having their kids out of school during the day:

“When you talk about disproportionate impact and you’re concerned about people getting back into the labor force, many are mothers, and they will have a harder time if their children don’t have a reliable place to go,” she said. “And if you think generally about people who have jobs where they can’t telework, they are disproportionately Black and brown. They’ll have more of a challenge when child care is an issue.”

Two points stand out in all this as especially obnoxious. First, what most of these people are concerned about, or should be concerned about, are class disparities rather than racial ones. That’s Gould’s point ultimately in worrying about disproportionate burdens in child care. And it’s probably why African-Americans and Latinos have had worse outcomes than whites. There’s no genetic explanation for why COVID should hit them harder as far as I’m aware; they’re hit harder because they’re more likely to be exposed by working front-line jobs and they earn less on average than whites so they’re more apt to have lower standards of living with the attendant worse health effects. Why aren’t any of these experts focused on prioritizing by class, which would include poorer whites as well, instead of race?

Second, Matt Yglesias is right that deprioritizing senior citizens will backfire on race-minded wokesters by delaying the vaccine for a group that needs it urgently:

If you believe that Black Lives Matter, logically you should worry about the black lives that are most at risk. Those are indeed black senior citizens, as Yglesias says. It’s idiotic to want a 35-year-old white cashier to get the vaccine before a 75-year-old African-American grandmother because there’s a higher percentage of African-Americans in the “essential worker” group than there is among senior citizens. Get the vaccine to the people who need it most urgently. Contorted racialized arguments for doing otherwise reeks of virtue-signaling.