Hillary: How can people who stood by Trump be offended by a Democrat using a curse word? Update: Dillon walks back “f***ers” comment 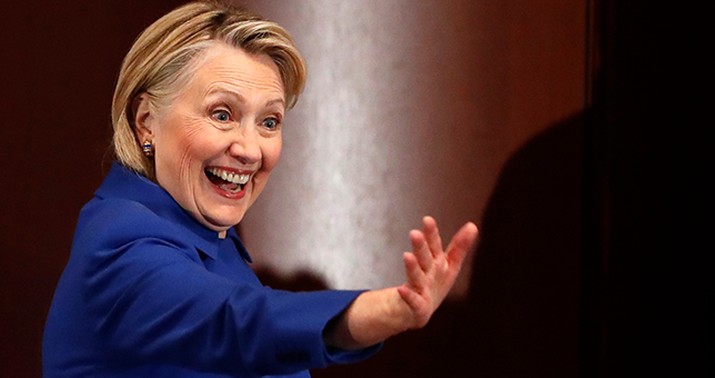 I mean, point taken. But if Team Joe is semi-serious about some sort of “heal the nation” rapprochement with Republicans (which will never work, by the way), Hillary Clinton is the last person they should want Leeroy-Jenkins-ing her way into the effort.

Well, second to last. Obama would be the absolute last. “Let me be clear. These people are f***ers.”

This whole dumb “Biden campaign manager insults Republicans” story is making me feel sentimental, reminiscing about the Before Times. It’s a vintage 2014-ish tale in which a Democrat says or does something outre and righties unite in various degrees of outrage about it. There’s now even a Hillary Clinton cameo, for cripes sake. Nature is healing.

People who stood by Donald Trump for the last four years are now claiming to be offended that a Democratic campaign manager used a curse word? I don't think so.

They’re not claiming to be offended that Jen O’Malley Dillon called McConnell’s caucus “f***ers.” They’re claiming to be offended that Team Joe is talking out of both sides of its mouth, crassly denigrating Republicans on the one hand while calling for an end to bitterly intractable partisanship on the other. Some Dems are even doubling down on it. Remember Obama campaign veteran Stephanie Cutter?

This story is based on one anonymous donor. Really? And does anyone really disagree with the sentiment? Jen just had the guts to say it. Will Republicans prove her wrong? Doubt it. “O'Malley Dillon's line that GOP are "f-ckers" worries some Biden aides”https://t.co/M0sCSw3neV

Meh. It’s understandable that she and O’Malley Dillon would want to jab at Republicans after a month of Trump trying to overturn the election with hardly any pushback from Senate Republicans, but they’re both professionals and should know better than to complicate Sleepy Joe’s outreach effort right now. On the other hand, a professional pol like Marco Rubio should also know better than to evince fake outrage at O’Malley Dillon, knowing what awaited him if he did:

Biden talks about unity and healing, but you want to know what they really think?

He’s getting roundhoused in the replies to that tweet by anti-Trumpers of all stripes for pretending to care about divisive rhetoric after standing by mutely for the past four years. (Some of the choicer responses are rounded up here.) What we should all remember about Rubio, though, is that he’s potentially facing a tough primary in 2022. He’ll be strongly favored to win the general election in reddening Florida if he makes it that far, but will he make it that far? He’s been careful not to criticize Trump much during his presidency but he also hasn’t been a MAGA cheerleader, and MAGA cheerleaders have noticed.

At a weekend rally organized by Republicans outside Miami’s Freedom Tower, a crowd unified by the false belief that the 2020 election was stolen from President Donald Trump gathered and waved Trump 2020 banners, American flags — and, in one case, a sign asking “Where’s Marco?”…

“Where is Marco, indeed?” Roger Stone, a former Trump adviser who spoke at the Sunday rally in Miami, wrote later on the social media site Parler. “A growing number of Florida Republicans are urging me to challenge Marco Rubio in the Republican primary.”

Stone later said that he’s friendly with Rubio and would probably run against Rick Scott if he were to run at all, but I do think there’s a sense on the right that Rubio is out of touch with an increasingly populist base. Which is ironic, as he’s been more aggressive than most Senate Republicans in trying to push a populist agenda. The day after the election, he was crowing that the GOP’s gains in the House and Trump’s improvements with Latino voters prove that it’s now a multiracial, mutiethnic working-class party. The wrinkle for Rubio is that he’s more of an economic populist, not a culture warrior, and what the Trump-era GOP wants is culture war. They want to see Marco fight!, not give a floor speech about expanding the child tax credit. If he ends up in a primary against some mega-Trumper like, say, Matt Gaetz — or even a Trump family member — how confident can he be of winning? How confident can he be of Trump’s endorsement?

I assume this is why he grumbled about O’Malley Dillon’s comments and why he’ll continue to look for ways to fight! in his own low-key way over the next two years. He needs to build up his culture-warrior cred. He has a big, big, big test coming up 20 days from today, when Congress meets on January 6 to certify the electoral college results. To this point, Rubio hasn’t been an election truther. Left to his own devices, I’m sure he’d accept the results from states that voted for Biden. But the reality of running for reelection in Florida won’t make it that easy. If some Republican senator objects to a state’s results, which seems likely, and thereby forces the entire body to vote on it, will Little Marco cast a meaningless vote to reject the results in order to protect his right flank? Or will he vote to accept them because it’s the right thing to do, creating extra motivation for MAGA fans in Florida to primary him?

Rubio losing a primary to Gaetz would be the perfect bookend to the tea-party era. He entered the Senate at the height of tea-party fever in 2010, coming out of nowhere to defeat soulless careerist Charlie Crist. If he ended up losing to Gaetz, he’d be the soulless careerist ousted by the brash insurgent, with the party base no longer even pretending to care (much) about the small-government principles that swept Rubio to power. If the GOP really is just a series of loyalty tests now more so than a political party, then certainly there are Republican politicians in Florida who can pass that test more easily than Marco. Gaetz is just the most prominent example.

Via Newsbusters, here’s Ana Navarro summing up the irritation at Rubio today among anti-Trumpers.

Update: Just as I was wrapping up this post, O’Malley Dillon has bitten the bullet and expressed … not an apology, certainly, but a little remorse. Progressives are already annoyed.

The mea culpa came in a virtual conversation Thursday with veteran Democratic operatives Stephanie Cutter and Teddy Goff, during which O’Malley Dillon acknowledged she “used some words that I probably could have chosen better” when speaking with author Glennon Doyle for a Glamour magazine interview published Tuesday…

Addressing the controversy Thursday, O’Malley Dillon argued that “the point that I was really making” in the Glamour interview “is an incredibly important point. And that really is about the president-elect and why he was supported by over 81 million people, and what they were looking for.” She went on to restate Biden’s “belief that we can get things done, and we can get them done if we come together.”

If you really want to heal the country and bring the two sides together, here’s how you do it.

the fuck-it move of 2020 is outgoing Rep. Joe Cunningham (SC-01) cracking this beer in his farewell speech on the House floor

(he tried to bring a 6-pack onto the House floor at the start of his term but was denied) pic.twitter.com/VYqvs4LU1Q

Update: AOC wants in on this action:

.@marcorubio you stood by in total silence when your GOP colleague called a Congresswoman a “f— b—“ on the Capitol steps in front of press.

You weren’t big enough to speak then, & you don’t get to sob now.

BTW that is the right word for those who fleece & scam working families. https://t.co/gKoCnJ4App pic.twitter.com/qIERPlV7HR