Rubio: The GOP is a working-class party now and needs to rebrand that way for 2024 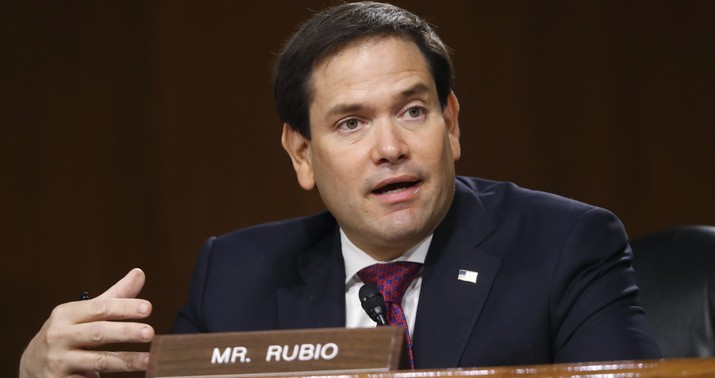 Probably the happiest man in the GOP this week.

“The future of the party is based on a multiethnic, multiracial working class coalition,” said Rubio…

He added that working class Americans are now largely against big businesses “that only care about how their shares are performing, even if it’s based on moving production overseas for cheaper labor.”…

“If the takeaway from all of them is now is the time to go back to sort of the traditional party of of unfettered free trade, I think we’re gonna lose the [Trump] base as quickly as we got it. … We can’t just go back to being that,” he added.

Note the line about market fundamentalists and bleating about socialism. This guy burst onto the national scene 10 years ago at the height of small-government fever, replete with a profile in the Times titled, “The First Senator From the Tea Party?”

What’s got Marco so chipper? Simple: It’s Trump’s gains among Latino voters on election night. One of the reasons why Rubio’s role in the Gang of Eight was such a liability for him in the 2016 primaries is that border hawks convinced themselves that the GOP wouldn’t be viable as a major party if the Latino population grew. Minorities vote for Democrats, period. Thus, the last thing any Republican should want to do is boost the number of Latinos in the U.S. by amnestizing America’s millions of illegal immigrants. So long as the view held among populists that the Latino vote was lost to the GOP and would doom the party to perpetual rump status, Rubio’s Gang of Eight baggage would make him a nonstarter in a primary.

So imagine his delight when Trump, ironically the most anti-immigration Republican president in ages, proved that the Latino vote might be gettable after all.

#Florida & the Rio Grande Valley showed the future of the GOP

A party built on a multi-ethnic multi-racial coalition of working AMERICANS https://t.co/1t2IJldqjH

He really likes that line about a “multiethnic, multiracial working-class coalition.” It still better describes Democrats than Republicans (Biden got 55 percent of the vote among people whose families earn $50,000 or less) but it’s a brand Rubio’s been working on for years. Probably the most notable event from his 2016 campaign was the rally in South Carolina when Nikki Haley, Tim Scott, and Trey Gowdy showed up to endorse him — a white male congressman, a black male senator, and an Indian-American woman governor endorsing a Cuban-American senator from Florida. Multiethnic, multiracial. The “working class” image is something Rubio’s been tinkering with for awhile too. Remember that he threatened to tank the GOP’s tax cuts in 2017 because he wanted a bigger child tax credit for families. Four months later, in April 2018, he complained that that tax-cut bill provided mere “crumbs” for working families:

“If we basically say everyone is on their own and the market’s going to take care of it, we will rip the country apart, because millions of good hardworking people lack the means to adapt.” Economic liberty, in this retelling, becomes something the government is required to guarantee. It is the freedom to enjoy “the dignity of work”, says Mr Rubio. “There needs to be a conservative movement that addresses these realities.” . . .

Mr Rubio’s proposal, to double the tax credit to $2,000 per child and pay for it by making a small increase to the corporate rate his party wanted, was decried by some Republicans as socialism. The watered-down version they accepted, as the price of Mr Rubio’s support for the bill, excluded the poorest families. “There is still a lot of thinking on the right that if big corporations are happy, they’re going to take the money they’re saving and reinvest it in American workers,” he says. “In fact they bought back shares, a few gave out bonuses; there’s no evidence whatsoever that the money’s been massively poured back into the American worker.”

He’s been in class-warrior mode for awhile. Three things have been holding him back, though, one of which was the perception that his core appeal — a young, Latino politician who might theoretically be able to woo Latino voters — was supposedly fool’s gold because Latinos will nevvvvvver vote Republican en masse. They’ll become more of a racial bloc like African-Americans over time, or so the argument went.

Then everyone woke up this week to find that Latino voters might be in play for the GOP after all. And now that they are, a young, Latino politician sounding Trumpist notes about the forgotten man might appeal to a post-Trump party that’s eager to win again. “Rubio told me he is leaving the door open for a 2024 presidential run,” Axios reporter Alayna Treene noted in the story quoted at the start of this post. You don’t say.

The second thing holding him back is the prospect of Trump running again in 2024. Rubio’s under no illusions that he’ll win a head-to-head primary with the president, whatever his hypothetical appeal in a general election:

Sen. Rubio's full quote to me yesterday when I asked him about possibility of Trump running in 2024: "He'll certainly be the front runner, and then he'll probably be the nominee" pic.twitter.com/F0mAB7zDui

Marco’s not too broken up about that, though. He’s not even 50 yet and will be a heavy favorite to win another Senate term in reddening Florida in 2022. If he needs to wait an extra four years to take another crack at the presidency, no problem. He’ll continue polishing his “working-class” image with policy proposals like the expanded child tax credit in the meantime.

His third and biggest problem is that he’s a poor match temperamentally for a national Republican primary electorate. Rubio is an optimist by nature; he swoons to “shining city on the hill” rhetoric. He’s a “unity” guy. What the base seems to want is someone boorishly charismatic who’ll reassure them that the people whom they hate really are human garbage who are trying to ruin the country. Rubio is more comfortable waging populist class war than waging populist culture war — but if he thinks that’s the path to winning a national race in the GOP post-Trump, well, that makes one of us. Economic populists want fiscal policy to be the main dish and culture war to be the garnish; my strong suspicion is that most Republican voters want it the other way around. That may not be a fatal flaw for Rubio depending upon how hungry Republicans voters are to win and what sort of gains they continue to make with Latino voters in 2022 and beyond. But it’s an obstacle. He’s not a convincing culture warrior. I wish other Republican pols prioritized the way he does, but they don’t. He has an uphill fight.

Here he is today in Georgia, earning favors from the party by stumping for Kelly Loeffler and David Perdue in their runoff campaigns and laying into Bernie Sanders for — ta da — socialism. I wonder how well Marco would fare in a general election pitted against a left-wing economic populist like Bernie. The problem for right-wing economic populists is that the left can and will always outbid them; if we ever ended up in an election that operated as a referendum on who can deliver more for the working class I wouldn’t be confident in how that might go. The GOP’s advantage is culture war, reminding voters that left-wing fiscal goodies tend to come packaged with “defund the police” nuttery. Is a guy like Rubio who’s not a natural-born culture warrior the person to prosecute that culture war?