Too good to check: Is Ivanka looking to primary Marco Rubio in Florida? 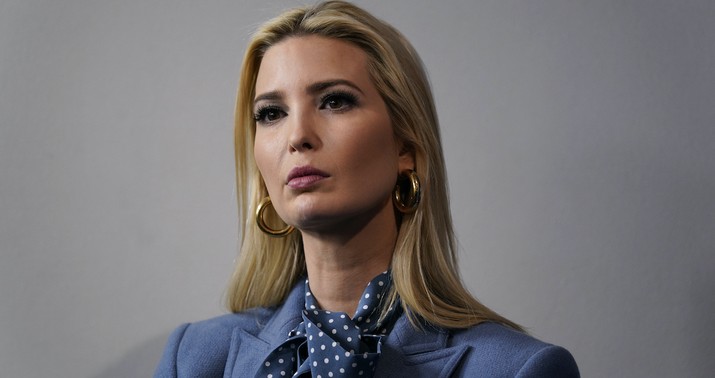 I have but one question. Is there a way I can donate to her campaign now?

Nothing, and I mean nothing, would be funnier than watching Little Marco be a toady for Trump for four years while biting his tongue in order to protect his right flank and keep his presidential hopes alive, only to have Trump’s daughter nuke him effortlessly in a primary because she wants to be a politician now.

Would Rubio even contest that primary? It would be an act of grave disloyalty to the president and his supporters for Marco not to stand aside when asked to make way for the next generation of the Trump monarchy.

Maybe Senator Ivanka would reward him with some sort of low-level advisor position in his office. He’s a good communicator. He’d make a fine press flack.

I’m going to write her a check for $2,800 now and will mail it once she declares her candidacy. Assuming, that is, that the rank but enjoyable speculation in this CNN piece is true. She and Jared are moving to Florida after Trump leaves office, partly because NYC clearly doesn’t want her anymore, partly because there’s a secluded ultra-rich area near Mar-a-Lago that’ll provide her family with privacy and protection, and partly because … she’s looking to get into politics, allegedly.

Her problem is that Florida is already top-heavy with Republicans. The governor? A Republican, Ron DeSantis. Senators? Republicans Rubio and Rick Scott. There are House seats she could vie for but it’s impossible to imagine Trump’s favorite child hiding in a crowd of 435 people, doing dull committee work instead of being out in front of the cameras. Clearly she’d want to run statewide, but that means either primarying an incumbent or convincing them to vacate their seat. It turns out she couldn’t primary DeSantis even if she wanted to: Florida law requires candidates for governor to have been a resident and registered to vote in the state for seven years. And if she’s looking to primary Scott, she’d have to wait a bit. He’s not up again until 2024, by which time the GOP base’s devotion to the Trumps might have cooled a bit. And Scott is well-armed for a tough primary with universal name recognition in the state after serving as governor and senator and a net worth of hundreds of millions of dollars.

Little Marco, though? Not rich. Viewed suspiciously by the base, especially MAGA types, for his “Gang of Eight” heresy on immigration. And up for reelection in 2022, which means Ivanka wouldn’t have to wait long.

Do it, Ivanka. Don’t think twice.

Trump has not ruled out a near-future run for office, nor has she publicly denied she has political ambitions of her own. Florida, which President Donald Trump won in 2016 and 2020, provides a potential opportunity for Ivanka Trump, should she choose to enter politics.

“Ivanka definitely has political ambitions, no question about it,” the source told CNN. “She wants to run for something, but that still needs to be figured out.”…

“Assuming she’s not interested in a low-profile political office, that would leave the United States Senate as a possibility,” said Adam C. Smith, former Tampa Bay Times political editor and now consultant with Mercury Public Affairs. “Marco Rubio is up for reelection in 2022 and is expected to run again. But I wouldn’t think Rubio would deter her if she wanted to run. The last time Marco Rubio ran against a Trump in Florida, in the 2016 presidential primary, Rubio was crushed by 19 percentage points.”

“I think she’d be the immediate frontrunner if she ran for US Senate against Rubio, given her father’s popularity in the Sunshine State,” Smith continued. Remember that Rubio said in 2016 when he ran for president that he wouldn’t run again for Senate; he was talked out of that commitment after his presidential campaign went bust. Now that Trump’s reportedly thinking of running again in 2024, there won’t be another Rubio presidential campaign for eight more years at least. What does Marco do, then? Cling to his Senate seat for dear life, wanting to remain a prominent public figure until his chance comes around again? Or say “to hell with it” and stand aside for Ivanka so that he can take a high-paid lobbying job somewhere?

Maybe he’d make a deal with the Trumps. “I’ll retire from the Senate and go make a bunch of money for a few years if you’ll commit now to endorsing me for governor once DeSantis’s two terms are up in 2026.” Would the Trumps take that deal? Would Rubio possibly trust them to honor it?

If he thinks he’s going to be primaried successfully by Ivanka, the smart play would be to at least try to get something out of it for himself.

Speaking of 2024, Marist polled people this week on whether they’re amped for another Trump presidential run. Result: Not really, even if you grade on the “polls chronically underestimate Trump’s support by five points” curve.

Even whites without a college degree, his base, are “meh.” But a poll like this is worth next to nothing at a moment when Trump’s just been beaten and is behaving badly even by his usual standards. Either Kamala Harris or an 82-year-old Joe Biden would be a favorable match-up for him in 2024, especially if the economy is sluggish during Biden’s presidency. “Trump fatigue” is bound to wear off on swing voters to some degree too with Trump no longer omnipresent in American media. And of course no next-gen Republican will have the stones to challenge him in a primary, which makes things simple for Republican voters. He stands a very fair chance of winning in 2024, however dismal that prospect seems to most of the country right now. Exit quotation from a Republican operative who spoke to Vanity Fair about Trump’s plans: “This f***s Mike Pompeo. This f***s Mike Pence. How do you raise money if Trump is running?”