Fauci: Don’t have your kids come home for Christmas this year 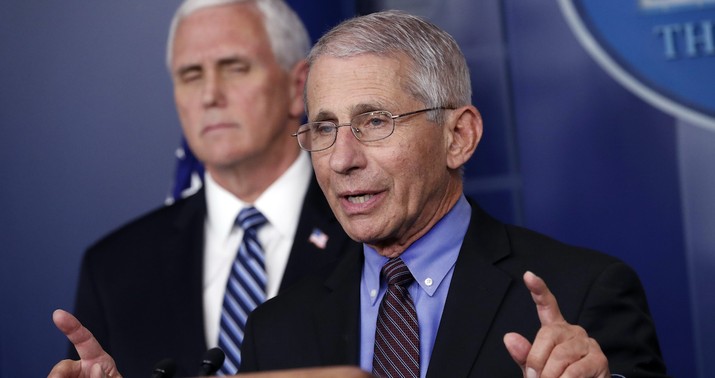 It’s good advice under the circumstances…

Our daily update is published. States reported 1.8 million tests, 231k cases, and a record 3,400 deaths. There are 113,069 people currently hospitalized with COVID-19, a new record for hospitalizations. pic.twitter.com/UBkhbQa909

…but I fear the “Cancel Thanksgiving! Cancel Christmas!” messaging is doing more harm than good. It seems punitive rather than prudential. And people understandably bristle at being punished when they didn’t do anything wrong.

How about something more oblique? “With the virus spreading uncontrollably, gatherings of any size are a serious threat to your health right now. Without exception.” That’s all you need. If you make it about people seeing their kids, the instinct is to respond, “No one tells me when I get to see my kids, pencil neck.”

“I’m going to be with my wife — period,” Fauci told Power Up during an interview on Monday. “The Christmas holiday is a special holiday for us because Christmas Eve is my birthday. And Christmas Day is Christmas Day. And they are not going to come home … That’s painful. We don’t like that. But that’s just one of the things you’re going to have to accept as we go through this unprecedented challenging time.”…

I haven’t been following the daily COVID data closely lately, so stumbling across this tweet felt vaguely like being hit across the head with a two-by-four. What on earth is happening in California?

California health authorities are reporting a one-day record of 379 coronavirus deaths and more than 52,000 new confirmed cases. The figures mean California has seen more than 1,000 deaths in the last five days and nearly 106,000 cases in just two days. https://t.co/bLH1DVq8d0

A hundred thousand cases in two days? A quick check of global coronavirus stats shows that only two countries on earth had more than 50,000 yesterday, Brazil and (of course) the U.S. And Brazil had only 18,000 more than California did — with more than five times the population. Viewed in that context, the state’s byzantine, sometimes bizarrely draconian lockdown restrictions become … not “defensible,” exactly, but more understandable. Health officials there are in a white-knuckle panic. California’s quickly become one of the most ferocious COVID hot spots on earth, with daily deaths leaping this week to around twice what the previous daily high was.

“The health system in California is at risk of capsizing,” @PattersonNBC reports as hospitals in the state are reaching or nearing capacity with record daily coronavirus cases and record virus-related deaths. pic.twitter.com/DRenKvKb10

Their experience is mirroring Germany’s experience. California and Germany each had surprisingly mild outbreaks of the disease in spring and summer, which may have bred a sense of complacency in residents that a truly nasty wave would never hit them. Both were wrong. “This assumption, combined with the government’s imposition of a moderate lockdown in November that left all shops, offices and factories open, meant Germans didn’t cut down on social contacts nearly enough as the virus began spreading again rapidly through the country, scientists say,” per a WSJ story today. On Tuesday Germany recorded 952 deaths, shattering the previous one-day high of 598. Adjusting for population, that would be tantamount to something like 4,000 deaths here, a pace even the U.S. in its current outbreak hasn’t quite reached. Yet.

Meanwhile in Sweden, the number of daily cases per capita now exceeds that of the U.S. The great anti-lockdown experiment has produced an admission of failure by the king himself.

“The Swedish people have suffered enormously in difficult conditions,” King Carl XVI Gustaf told state broadcaster SVT. When it comes to the strategy deployed in Sweden, he said, “I think we have failed.”

Much of the blame has been directed toward the chief architect of Sweden’s strategy, Anders Tegnell, its state epidemiologist. A poll published on Thursday showed that support for him and his employer has slumped over the past two months…

In an interview with broadcaster TV4, Tegnell said no one can tell whether Sweden’s strategy has failed. He was responding to a report published earlier in the week that showed significant shortcomings in Sweden’s approach that led to excess deaths among the elderly…

“We are beginning to approach breaking point in many different aspects,” he said. “I understand that health-care is having a very tough time now…the staff are worn out,” all of which means “that the pressure on care is becoming very, very great.”

If the strategy was to try to avert a ferocious winter second wave by inculcating a degree of herd immunity in the population in spring and summer, the fact that that ferocious wave has struck *would* seem to qualify as a failure. I understand the human impulse not to admit error about a decision that ended up costing lives, but come on:

Here, for reference, is Tegnell's plateau.*

* To be fair, the first derivative may have plateaued.†

† Which is really bad, but actually not insignificant for an infectious disease outbreak where exponential growth is an ever-present threat. pic.twitter.com/XYjxtClVop

The only western countries that seem to be doing “well” at the moment are those that experienced a nasty wave last month and then locked down. France, for instance, has cut cases by two-thirds. But it’s not foolproof: The UK imposed restrictions to limit the spread too and their cases have begun creeping up again lately. California has some of the most stringent measures against gathering in the entire U.S. and, as noted, the epidemic there is raging out of control. In fact, California had more cases yesterday than the UK and France combined despite having only one-third the population. A regional stay-at-home order is taking effect tonight. Cross your fingers.