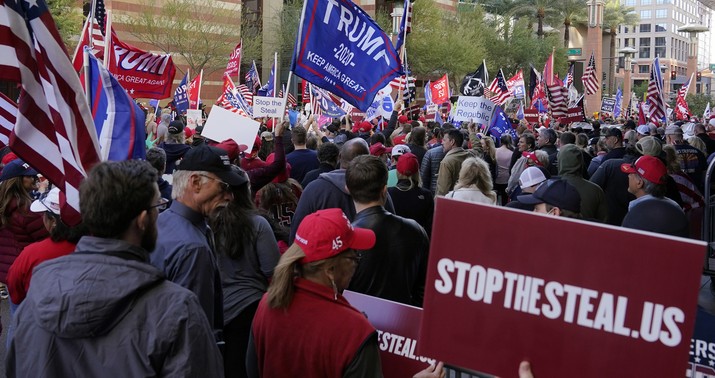 A good example of how the president’s obsession with “loyalty” leads him and his party to embarrassing episodes. Having Trump’s losing slate of electors cast their ballots for him today, when Arizona, Georgia, and the Rust Belt states are making Joe Biden’s victory official, won’t do a thing to stop Biden from becoming president.

But it did make for a laugh on political Twitter this afternoon. Imagine being so petulant about having lost an election that you felt obliged to hold your own pretend electoral college vote as a symbolic protest. It’d be pathetic if grade-schoolers did it after an election for student body president. These are grown adults acting with respect to the highest office in the land.

#Breaking Georgia Republicans are meeting at the Cap to select their own slate of Trump electors to send to Washington even as Georgia Democrats are meeting to send the official slate of Biden electors to Congress. pic.twitter.com/TJZGjcJS57

This move comes an hour after the state Supreme Court upheld Biden’s win.

Republicans are doing this to preserve their options — to continue to raise issues in court or to bring challenges before Congress.

This is despite a slew of losses, including today.

Stephen Miller gave the same explanation to Fox this morning, that this is being done to keep the campaign’s legal options open. The idea, I guess, is that the “alternate” electors might have standing to press election claims in court whereas other citizens might not. Or, at the very least, that their votes today for Trump can and will be eventually counted if a court somewhere goes on to rule in Trump’s favor in an election suit.

"As we speak, an alternate slate of electors in the contested states is going to vote and we are going to send those results to Congress."pic.twitter.com/5kIkfsbOFw

I regret to inform everyone that no court will be overturning the results of an election after the electoral college has met and voted, whether or not the plaintiffs can clear the standing hurdle.

There’s another reason why Trump might want a vote of pro-Trump electors on the books somewhere. Remember that Congress meets on January 6 to formally record the votes of the electoral college; at that meeting, lawmakers can be forced to vote on whether to accept a state’s electors if one member of the House and one member of the Senate object. There were ominous scenarios floating around before the election in which, if the race between Biden and Trump were close enough, that process in Congress could have wreaked total havoc with the final result. Barton Gellman wrote in September about a nightmarish prospect in which the election came down to one state where the governor is a Democrat and the state legislature is controlled by Republicans. What would happen if the governor certified Biden’s election-night victory but the legislature appointed a set of pro-Trump electors instead?

Republicans control both legislative chambers in the six most closely contested battleground states. Of those, Arizona and Florida have Republican governors, too. In Michigan, North Carolina, Pennsylvania, and Wisconsin, the governors are Democrats.

Foley, the Ohio State election scholar, has mapped the ripple effects if Republican legislators were to appoint Trump electors in defiance of the vote in states like Pennsylvania and Michigan. The Democratic governors would respond by certifying the official count, a routine exercise of their authority, and they would argue that legislators could not lawfully choose different electors after the vote had taken place. Their “certificates of ascertainment,” dispatched to the National Archives, would say that their states had appointed electors committed to Biden. Each competing set of electors would have the imprimatur of one branch of state government.

The wrinkle in today’s stunt is that the pro-Trump electors haven’t been formally appointed by their state legislatures or recognized in any official way. The speaker of the Michigan house issued a letter, in fact, stressing that while he’s disappointed that Biden won, there’s no chance the legislature will meet and appoint its own pro-Trump electors.

Today’s Republican “alternate electors” don’t have the “imprimatur of one branch of state government,” in other words. As election law prof Rick Hasen notes, they have no legal authority whatsoever. They’re just a bunch of people pretending to cast votes that matter. You can do the same thing in your living room right now if you like, pretending to cast a vote for Trump or Biden. Why Congress or any court would recognize them as “official” for purposes of some election challenge escapes me.

See what I mean about how this is a scam? It’s meant to show MAGA fans that Republicans are “fighting!” but it’s nothing more than a pitiful simulacrum.

And to make it more pitiful, even if state legislatures did recognize these pro-Trump electors as official, the outcome in Congress on January 6 is foreordained. In all likelihood, if the House and Senate are forced to vote on whether to accept a state’s official slate of pro-Biden electors, both chambers will vote yes since a few Senate Republicans like Romney and Collins will cross the aisle to vote with Dems. But even if the two chambers were to deadlock, the tiebreaker goes to whichever candidate’s electors were formally certified by the governor. That’s Biden, who’s been certified the winner in Georgia, Arizona, and the Rust Belt states.

There’s no way around the outcome of this election, neither today nor on January 6 nor in court. Any suggestions to the contrary are part of the scam.

Here’s Karl Rove warning yesterday that Trump is “on the edge” of coming off like a sore loser. On the edge? How long does this need to go on before he’s over the edge?

Sharyl Attkisson & others do a #1A fact check on Penn. Lt. Gov's claim about what's 'not protected speech'