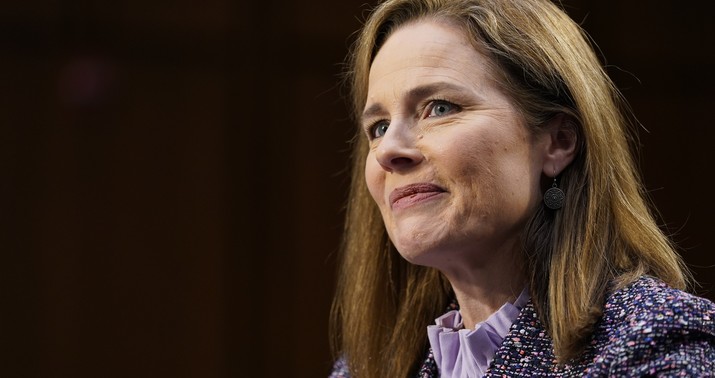 There was never a doubt about the outcome.

The only doubts were (a) whether the Court would feel obliged to hear the case before ruling against Texas, on the theory that it has no discretion to reject cases arising out of original jurisdiction, and (b) whether it would issue a lengthy opinion attacking the flaws in Texas’s complaint or just give it the back of its hand.

We have our answers:

Note that Alito and Thomas thought the Court was required to hear the case but even they “would not grant other relief.” The “other relief” sought by Texas was an injunction to block Pennsylvania, Michigan, Wisconsin, and Georgia from awarding their electors to Biden. Presumably that decision was 9-0.

This was the easiest ruling these judges will ever issue. They weren’t going to effectively dissolve the United States because Trump can’t cope with the fact that he lost and Republican officials can’t bear to tell him otherwise. Just the fact that Ken Paxton and his many allies were willing to bring this suit, knowing the consequences if it prevailed, has done damage to the country that’ll never be undone. Like I said earlier, the masks are off.

Lotta reaction to come, no doubt, including from you-know-who. Stand by for updates.

Update: Ben Sasse cheers the decision: “Since Election Night, a lot of people have been confusing voters by spinning Kenyan Birther-type, ‘Chavez rigged the election from the grave’ conspiracy theories, but every American who cares about the rule of law should take comfort that the Supreme Court — including all three of President Trump’s picks — closed the book on the nonsense.”

Update: There’s a school of thought that the double whammy of being rejected by SCOTUS and seeing the electoral college elect Biden on Monday will finally convince Trump that the game is over. I think he’s assumed for awhile that the game is over, though. The question isn’t whether he understands that he’s lost, it’s how spiteful and destructive he wants to be on his way out the door. I think Sciutto’s right:

And, no, it’s not over, because this is a propaganda fight, not a credible legal one, which Trump will not give up given his refusal to acknowledge any loss. And many in his party will remain too fearful to contradict him.

The worst is yet to come.

Trump alluded to idea he needed Barrett in place to settle the election outcome well before Election Day and as he was nominating her. She did not rule in his favor in this suit.

The reason he wanted Barrett confirmed immediately, before November 3, was because he assumed it would stack the deck for him at the Court in case he lost the election and needed SCOTUS to do him a solid by pulling off a coup for him. He must be genuinely shocked to find that his appointees don’t approach their jobs that way.

The key point is that no one involved in this thought it would succeed. No one. Not Paxton, not the AGs who joined him, not the Republicans in Congress who signed on. It’s been a giant fraud perpetrated on Trump supporters. If anything, some people participating in the suit likely signed onto it *because* they knew it wouldn’t succeed. They thought it was a harmless political stunt, a gesture of loyalty to the MAGA base that would go nowhere and cost them nothing. Trump himself might be the only exception, as it’s increasingly hard to tell how much he’s capable of separating fact from fiction when he wants to believe the fiction. He may have talked himself into thinking that SCOTUS would deliver for him here. But everyone else knew better and it’s a disgrace that they led his fans to believe otherwise.

Update: A lot of nutty foot-stamping to come, needless to say.

The @TexasGOP is out with a statement in the wake of the Supreme Court decision, all but calling for secession:

“Perhaps law-abiding states should bond together and form a Union of states that will abide by the constitution.” pic.twitter.com/4bB3gk88t4

It’ll be interesting on Monday to see how congressional Republicans react to the electoral college making Biden’s victory official, especially now that SCOTUS has ruled. More Republican senators have gradually come around to kinda sorta acknowledging that Biden won, but as the setbacks pile up and the bitterness among Trumpers climbs higher, it becomes more — not less — politically costly for them to admit Biden will be president. In a rational world the opposite would be true, with people adjusting to reality as the court challenges fade and the electoral process moves towards inauguration. Trump could give GOP politicians cover by simply saying, “Okay, it’s over, I don’t accept it but it is what it is,” but he won’t. This will get worse.

Update: Indeed. This suit was a con, but it won’t be the cons who will suffer for it now that it’s been exposed.

A whole lot of people who got taken in by liars are going to be in a bunch of pain and trying to figure out how this still turns out the way they've been promised it will and none of this ends up well for any of us.

Update: As I was saying about who grasped reality here and who didn’t:

Several Republicans who signed their names to the amicus brief for the Texas lawsuit understood it would likely quickly be shot down by the Supreme Court and only viewed it, like many other things in Trump's world, as a loyalty test. But Trump told people he thought he'd prevail.

This is an accurate description of the ruling. You don’t have to like it. You don’t have to agree. But you do have to think to yourself about how freaking out over it somehow assumes that Clarence Thomas started loving Joe Biden in the last couple weeks.