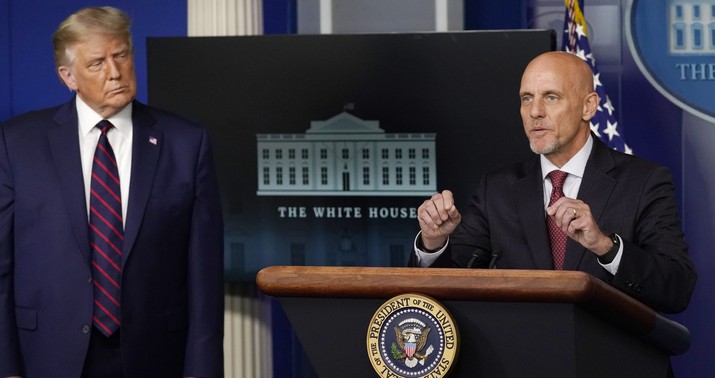 A terrible idea, short on brains and long on bravado.

If I were FDA chief Steve Hahn, I’d laugh in their faces and tell them they’ll get the approval as soon as it can be done responsibly and not a second before. The Times reported last night after the FDA’s advisory panel approved the vaccine that full agency authorization was expected on … Saturday. In other words, after waiting nine months, the White House is threatening to humiliate the guy who oversaw the most rapid vaccine approval process in U.S. history over a window of time that may amount to something like 12 hours.

Call their bluff. Find out what Mark Meadows is made of. Make them wear the headline, “FDA IN TURMOIL AS HISTORIC VACCINE DEBUTS AFTER TRUMP FIRES CHIEF.” Nothing would do more to build public confidence in the product than having the guy who approved it getting sh*tcanned on the day it’s introduced.

White House Chief of Staff Mark Meadows on Friday told Stephen Hahn, the commissioner of the Food and Drug Administration, to submit his resignation if the agency does not clear the nation’s first coronavirus vaccine by day’s end, according to people familiar with the situation who spoke on the condition of anonymity because they were not authorized to discuss what happened…

With the timetable apparently accelerated from Saturday morning, the FDA and Pfizer were rushing to complete the paperwork needed for the authorization, according to another individual who spoke on the condition of anonymity because he didn’t have authority to discuss the plans

An FDA statement issued early Friday morning said the FDA had informed Pfizer that it would “rapidly work toward finalization and issuance of an emergency use authorization” following Thursday’s endorsement of the Pfizer-BioNTech vaccine by an agency advisory committee.

Meadows’s boss chimed in this morning:

While my pushing the money drenched but heavily bureaucratic @US_FDA saved five years in the approval of NUMEROUS great new vaccines, it is still a big, old, slow turtle. Get the dam vaccines out NOW, Dr. Hahn @SteveFDA. Stop playing games and start saving lives!!!

What’s wrong with publicly pushing the FDA to work overtime today to get the approval done instead of rolling it out on Saturday? In theory, nothing. But as I noted last night, the agency’s guiding principle in this process seems to have been “as quickly as ethically possible without cutting corners.” Every government medical expert from Fauci on down who’s talked about the vaccine has been at pains to make that clear. They did this as fast as they could but they didn’t skip any steps because of the urgency of the crisis. They did it on a standard scientific timeline, not a political one, so you should trust that the product you’re getting has been scrutinized as rigorously as any other vaccine you’ve gotten.

So here are Trump and Meadows, at the very last moment, foolishly barging their way in to say, “Tonight or bust,” and thereby generating a bunch of media coverage that’ll lead some Americans to say, “Maybe they did rush this out before it was ready for primetime after all.” If they were going to strongarm the FDA into cutting corners, why do it one day before approval arrives? Do it in October. That would have been a *really* terrible idea in that it would have convinced millions that the vaccine was being pushed out prematurely to help Trump’s campaign, but at least some extra lives would have been saved over the past two months.

Axios is reporting that Meadows didn’t quite promise to fire Hahn if the approval wasn’t done today. He just implied it: “White House chief of staff Mark Meadows hinted to Food and Drug Administration commissioner Stephen Hahn on a phone call Friday that his job security might be in jeopardy as he pushed the FDA chief to approve Pfizer’s coronavirus vaccine by the end of the day, according to two sources familiar with the call.” According to the Times, Meadows told Hahn he “may as well start working on his next job if Dr. Hahn didn’t get it done on Friday.”

Biden’s being sworn in 40 days from now, buddy. Hahn will need to start working on his next job soon regardless.

The same Times piece claims that Hahn is indeed going to try to make the White House happy by getting the approval done sometime tonight instead of tomorrow morning. I hope the bad press this incident has produced, at the very moment the White House needs to start persuading the public to get vaccinated, was worth that 12 hours. In fact, HHS chief Alex Azar said this morning that he anticipated the first shots to happen on Monday or Tuesday of next week, in which case getting the approval done tonight instead of tomorrow morning may not do anything to actually accelerate the process. It gives Trump and Meadows a reason to boast, though, that they really put the spurs to the FDA — five feet from the finish line. Meh.

Here’s Biden this afternoon trying to sell the vaccine in his daily presser, saying, “There’s no political influence.” Not entirely true, it seems.

President-elect Biden's message to the public about FDA vaccine approval:

"You should have confidence in this. There’s no political influence." pic.twitter.com/QsgcrzWp7g