Sure looks like Biden’s pick for defense secretary will have trouble getting confirmed; Update: Blumenthal says no 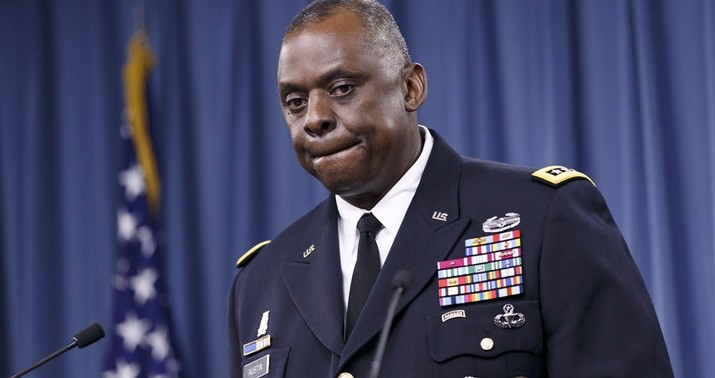 Alleged pick, I should say. It was widely reported last night that retired Gen. Lloyd Austin is his choice but Sleepy Joe hasn’t confirmed it yet.

And maybe there’s a reason for that. Austin is a controversial selection, as we’re about to see. Maybe this was a trial balloon from Team Biden, leaking Austin’s name to see how congressional Democrats would react. If the feedback was bad — and it’s been fairly bad — Biden could always turn around and nominate one of the other shortlisters, Michele Flournoy or Jeh Johnson, instead.

On the other hand, according to Politico, Biden himself offered Austin the job on Sunday and Austin accepted. That sounds like more than a trial balloon.

Why Austin instead of Flournoy or Johnson? A few reasons. First, African-American lawmakers have been lobbying Biden to appoint more black officials to his cabinet. Biden’s been considering Deval Patrick for Attorney General but the expectation is that that job will go to Sally Yates, Doug Jones, or Lisa Monaco, all of whom are white. Johnson, like Austin, is African-American but he’s “been criticized for his record on expanding family detention [as DHS chief] and accelerating deportations, as well as approving hundreds of drone strikes against suspected terrorists that killed civilians.” He’s too much of a hawk, and a border hawk, to make progressives happy.

As for Flournoy, she’d be the first woman defense secretary in U.S. history. But she’s white, and she never built the sort of relationship with Biden that Austin did when she worked for Obama’s defense department. “Biden … trusts Austin, as they worked together when Biden served as vice president and had a large foreign policy portfolio,” Politico noted. That’s in keeping with Biden’s general approach to appointments: He wants people generally whom he knows well and is comfortable with, like Tony Blinken. Austin was the commanding general in Iraq during Obama’s first term and the head of CENTCOM in his second. He and Sleepy Joe have worked together for years.

So what’s the problem with the pick? As I say, Austin is a retired military officer — and under U.S. law, retired officers aren’t eligible to be defense secretary until they’ve been retired for seven years. Austin’s been retired for four. In order to serve, he’ll need the same sort of waiver that James Mattis received from Congress before he was appointed defense secretary by Trump in 2017. Mattis was only the second retired general to ever receive that waiver; George Marshall was the first, nearly 70 years before. Now here we are with Biden requesting the same sort of exemption for his guy even though he has two perfectly acceptable alternatives in Flournoy and Johnson.

In other words, after running an entire presidential campaign vowing to restore “norms” to Washington, Sleepy Joe is about to follow Trump’s lead by busting one before he’s sworn in. Lots of people are unhappy about it this morning, and not all are Republicans.

If Biden wants to deemphasize the military, nominating a 4 star so recently retired that he needs a congressional waiver to serve sends the opposite message. 2/

Brooks is a law professor who used to work for Obama’s defense department. If you’re thinking “Who cares what she thinks?”, try this on instead:

I have deep respect for Gen. Lloyd Austin. We worked together when he commanded U.S. forces in Iraq, when he was vice chief of the Army, and when he was the CENTCOM commander. But choosing another recently retired general to serve in a role designed for a civilian just feels off.

And after the last 4 years, civil-military relations at the Pentagon definitely need to be rebalanced. Gen. Austin has had an incredible career––but I’ll need to understand what he and the Biden Administration plan to do to address these concerns before I can vote for his waiver.

Slotkin is a former CIA analyst turned Democratic congresswoman from Michigan. She just won a second term in Congress representing a Republican-leaning district, which makes her a prominent centrist voice in Pelosi’s newly diminished caucus. The fact that she’s uncomfortable with another retired general in charge of the Pentagon suggests Biden will have some trouble with this pick in Congress.

If you’re inclined to say “Who cares what she thinks?” to Slotkin too, since after all it’s the Senate rather than the House that confirms nominations, remember that Austin will need both houses of Congress to act to grant him a waiver. Also consider this:

“Waiving the law should happen no more than once in a generation,” Sen. Jack Reed, a West Point graduate and former Army Ranger, said when retired Gen. James Mattis was confirmed as Pentagon chief in 2017. “Therefore, I will not support a waiver for future nominees.”…

Sen. Kirsten Gillibrand, who voted nay [on Mattis], was as clear as Reed: “Civilian control of our military is a fundamental principle of American democracy, and I will not vote for an exception to this rule.”

That’s at least two Dems, both of whom are still sitting senators, who voted against a waiver for Mattis three years ago because they thought having a recently retired general atop the Pentagon was a blow to civilian control of the military. Never underestimate a politician’s capacity for hypocrisy (especially Kirsten Gillibrand’s), but if Reed and Gillibrand stick to their guns on that then Biden will need Republican votes to confirm Austin no matter what happens in the Georgia Senate runoffs. Will those votes be available?

Tom Cotton, whose opinion may carry a bit of extra weight in the Senate debate due to his own status as a veteran, told Fox News this morning that he suspects “that many senators believe that while General Austin has served our country with distinction and he might be a suitable nomination for many other Cabinet positions, that it’s time to restore proper civil military balance to the Pentagon and granting another waiver might put that at risk.” Reporters have already noticed that Biden has an unusually large number of former senior military officers on his transition “landing” teams for different agencies as well, with one former Bush official saying he “winced” at the trend. The more retired officers have reason to believe they’re in line for prominent civilian jobs after exiting the service, the more tempted they’ll be to play politics while still on duty to try to position themselves for plum jobs after leaving.

One argument against Austin’s nomination that’s been made repeatedly in the past 24 hours is that Marshall and Mattis were both granted waivers to lead the Pentagon in unusual circumstances. Marshall was appointed as the U.S. faced war in Korea; Mattis was appointed in hopes that he’d stabilize a loose-cannon president. There’s nothing similarly unusual in American politics right now to justify a waiver for Austin. If Congress grants it, they might as well repeal the law requiring a seven-year waiting period for retired officers to become defense secretary since they’ll have proved that they’re willing to issue waivers upon request. As for why having a recently retired military man in charge is a bad idea, it’s more than just a simple matter of defending the principle of civilian rule. (Ironically, one of the reasons Biden’s team reportedly likes Austin is that they expect he’ll loyally carry out Biden’s agenda without much pushback.) Both Marshall and Mattis made errors in judgment that may have been due to their being too close to some of the officers serving under them.

Marshall stood by as a civil-military crisis slowly developed between Truman and Gen. Douglas MacArthur, Marshall’s former Army peer. Marshall even tried to avert MacArthur’s firing for insubordination, related to Truman’s Korean War policy, before reluctantly backing the president’s call. It is telling that today we remember Marshall more for his time as secretary of state than for his tenure as defense secretary…

Ideally, notes Shay Khatiri, the SecDef and the chairman of the Joint Chiefs complement each other, with one focused on political considerations and the other on strictly military concerns. The Mattis/Dunford pairing undermined that dynamic. Brooks makes a similar point, that the SecDef is a diplomat of sorts, a liaison between the civilian government and the military. He should be a good politician, skilled at influencing other civilian officials to accomplish his aims. A retired former general used to having others do what he wants without question can be an awkward match for that role:

5/ One of the roles of the Secretary of Defense is to serve as the top translator between the military and the civilian policy-makers and political leaders:

7/ When people go more or less straight from senior military roles to senior civilian roles, it can be very hard for them to do that effectively.

“For secretary of defense, Americans should want someone of broad experience and perspective in civilian life, not the product of an all-absorbing institution as total in its way as the priesthood in the Catholic Church. The military way is a noble way. It is also a narrow way,” writes Eliot Cohen. “There are practical issues as well: Would a soldier favor his own service in intramural budget battles, or bend over backwards not to? Would he concentrate on policy rather than the kind of tactical management generals feel most comfortable with?”

The obvious wrinkle in all this for Republicans and especially Democrats is that no one will be keen to block the nomination of the would-be first black defense secretary in U.S. history. If he’s denied a waiver by Congress, or if the Senate rejects his nomination, it seems a cinch that Biden will need to nominate Johnson over Flournoy as an alternative. Lefties may dislike the idea of Johnson in charge but it’s hard to believe they’d block two African-American nominees before ultimately confirming a white woman, Flournoy, as Biden’s presumptive third pick. If I had to bet on who the next SecDef would be, I’d bet on Johnson.

Update: Can I increase my bet on Johnson?

NEW: Sen. Blumenthal (D-Conn.) will NOT support a waiver for Lloyd Austin to serve as defense secretary, he tells me. Blumenthal voted against a waiver for Mattis and says a waiver would “contravene” his belief in civilian control of the military.