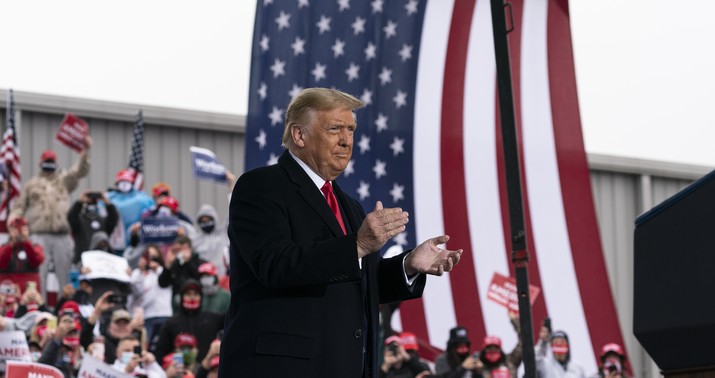 A leftover from a few days ago. I get that he wants to try to bigfoot Biden by stepping on his swearing-in but that seems highly likely to backfire, in the same way that the dueling townhalls he arranged with Biden in the final weeks of the campaign ended up backfiring. Trump thought that a head-to-head TV battle with an opponent as drab as Sleepy Joe would necessarily mean a ratings win. It did not.

Networks aren’t going to interrupt their inauguration coverage to carry his event. Not even Fox News will, I suspect — although Newsmax and OAN probably will, as that’ll be an opportunity for them to prove their greater loyalty to Trump by prioritizing his event over Biden’s.

He’s also going to be bludgeoned by critics for not doing the presidential thing by attending his successor’s inauguration, welcoming him to the White House, and participating in other niceties of the official handover. But Trump won’t care and his fans won’t either. Having gone all-in on claims of massive voter fraud, how could he play nice with Biden? That’d be even more illogical than him insisting that Georgia’s vote was rigged but that Republicans should vote in the state’s Senate runoffs anyway.

President Donald Trump is discussing the possibility of announcing a campaign to retake the White House in 2024 on Inauguration Day and skipping the swearing-in of his successor, according to three people familiar with the discussions.

There is “preliminary planning” underway for a Jan. 20 event to kick off a new Trump bid, the people familiar with the discussions said, though it’s possible the president could make the announcement earlier as no final decisions have been made.

Regardless of the timing of a campaign announcement, Trump is not expected to attend the inauguration of President-elect Joe Biden, according to the people familiar with the discussions. He also does not plan to invite Biden to the White House or even call him, they said.

Note that the Inauguration Day apparently won’t be the date he announces his campaign. It might be the official launch but the announcement will come sooner: “Trump has recently told some advisers he wants to announce a 2024 campaign shortly after the Electoral College meets on Dec. 14, the people familiar with the discussions said.” I’m frankly surprised that he intends to show his cards so soon rather than pursuing a Trumpier, more suspenseful “will I or won’t I run again?” media strategy. One would think he’d enjoy torturing the Ted Cruzes and Josh Hawleys and Nikki Haleys out there who want to run in 2024 but can’t make a move until they know what Trump is doing. Let ’em go to the trouble of building a campaign before declaring, “You know what? I’m running after all!”‘

I also think it’s a mistake for him to continue to assert a major presence in politics, replete with a “campaign,” so soon after the election. The biggest factor in his defeat was probably Trump fatigue. People just got tired of the daily antics. If he made himself scarce for the next 18 months, he could reemerge in time for the midterms. People would be excited to see him bring his and his fans’ energy back to the campaign trail. They might even realize they miss him a little, especially if Biden’s presidency gets off to a rocky start. Instead he’s going to try to be a “shadow president,” which is great if you’re hardcore MAGA and irritating if you’re part of the other 65 percent of the country.

One of the best laughs I’ve had since the election was reading this Axios piece yesterday back to back with this story in Politico. The takeaway from the Axios piece: Trump’s potential 2024 competitors in the GOP ain’t scared. They expect him to be badly damaged before the next primary, or at least they so claimed after being granted anonymity.

Reality check: Several allies who talk regularly to Trump told Axios they believe he’ll announce for 2024, but ultimately not make the run because of what one Republican close to Trump called “hurdles he has never before experienced.”

“I think he will have more trouble than he can begin to imagine,” the Republican said. “No one is going to let him have a free pass in the primary.”

“No one is going to let him have a free pass in the primary.” Once you put these people on the record, though, as Politico did, you find that they’re willing to give him so much of a free pass that they’re already clearing the field for him. It’s not even 2021 and they’re lining up to kneel before Zod.

“It’d be great if he ran. He’s done a good job. I think he ought to run if he wants to run. Who knows what’s going to happen in ‘24?” said Sen. Rick Scott (R-Fla.), who said he is not focused on a presidential run at the moment. “He can sell the things he accomplished.”…

“We’re so far away from that. I will tell you this. If he runs, I think he would clearly be the favorite. I think he would win,” said Sen. Marco Rubio (R-Fla.), who ran against Trump in 2016 and has mulled another run in the future. “I know it’s an interesting story, but I have no idea.”

On the very day that story was published, the president posted a 46-minute video touting wild theories of how the election was rigged which his elite strike force of lawyers still has yet to prove in court. He’s spent nearly every waking hour over the past month trying to undermine the country’s faith in its election system. Some of his most rabid fans have turned so feral in their efforts to harass people who are attached to the “fraud” that those people have had to go into hiding. The security director for Dominion Voting Systems is at an undisclosed location, according to the AP, because his photo, address, and family details were published online. He’s still getting threats from harassers who claim they know which town he’s hiding out in. “It’s terrifying,” he told the AP. “I’ve worked in international elections in all sorts of post-conflict countries where election violence is real and people end up getting killed over it. And I feel that we’re on the verge of that.”

Neither Trump nor anyone who works for him has said a forceful discouraging word about any of that. And even so, even so, the cretins in McConnell’s caucus are already scrambling to renominate him in 2024 by acclamation. I don’t say this lightly: Trump is one of the most respectable Republicans in government right now.