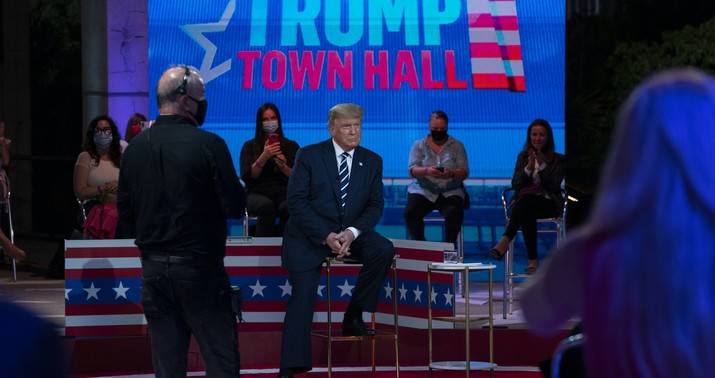 This is going to bug him more than losing the election will.

He’s the biggest star in the world. And TV is his turf, not Biden’s. Whatever you think of Sleepy Joe as a person and a politician, he doesn’t make for compelling viewing.

Plus, the inevitable cries from Trump that he was cheated will be harder to sell in this case than on election night. If he loses the vote by 10 points, he can point to ballot irregularities here and there as “evidence” that he’s the victim of massive fraud, or return to the tried-and-true “eight million illegal aliens secretly voted” excuse. But if he’s lost the ratings war, what’s the play?

Claim that Nielsen has been infiltrated by Antifa?

The reason Trump opted for a townhall on NBC, I thought, was because he knew that it would also be carried on their sister networks, MSNBC and CNBC. That seemed to guarantee that he would draw a larger audience than Biden, who’d be stuck with a single platform in ABC. And drawing a larger audience is of the utmost importance to the president:

EXCLUSIVE: According to multiple sources familiar with the president's thinking, Trump has told close associates that he wishes to counter-program the Biden town hall and score higher TV viewership numbers, and then use such a contrast to humiliate Biden

There is some humiliation happening this afternoon, but not at Biden’s expense. CNN says he won the night:

Joe Biden’s town hall on ABC averaged 13.9 million viewers on Thursday night, easily surpassing the Nielsen ratings for President Trump’s town hall on NBC. That alone was a result virtually no one in the TV business expected. And that’s not even the most surprising part…

The Trump town hall averaged 10.6 million viewers on the NBC broadcast network. On MSNBC, Trump reached 1.74 million viewers, and on CNBC, about 671,000 viewers. So Trump’s gross audience across the three channels was 13 million, about one million fewer than Biden’s audience on ABC alone.

Staffers at ABC News privately admitted to their surprise when the preliminary ratings came in on Friday.

“In terms of the fast national 18-49 demographic, Biden is comfortably on top with a 2.6 rating to Trump’s 1.7,” said Variety of the early numbers.

So, who’s getting fired from the campaign? Bill Stepien? Everyone?

There are two obvious possibilities to explain Biden’s ratings triumph, however unlikely it may have seemed a few hours ago. One is that Trump’s act is simply played out after five long years. Dan Foster made me laugh with this:

I don’t think anybody would have guessed this. We might be in “Season 37 of 'The Walking Dead’” territory. https://t.co/r2MmwgDOpu

“The Walking Dead” might be the only show on television more predictable than a Trump interview. The other possibility, not exclusive from the first, is that Americans are watching the polls, realize who’s likely to be in charge on January 21, and figured it’s time to start paying a little attention to that guy. Biden’s campaign spokesman put it this way:

Turns out more people last night were interested in watching a leader with a clear plan to get this pandemic under control and Americans back to work, than the same combative, chaotic liar whose incompetence got us into this mess — regardless of how many channels he was on. https://t.co/kvN89pCzAX

Whichever theory you favor, the takeaway is clear. We appear to be approaching the “Puppet Show and Donald Trump” phase of the MAGA saga.

I’ll give you another pair of interesting numbers in closing. First, YouGov seems to have anticipated Biden’s ratings victory with the polling data it gathered overnight. Fifteen percent of registered voters said that they watched parts of both townhalls, but an additional 17 percent said they watched Biden’s exclusively while just 14 percent said they watched Trump’s exclusively. More independents watched Biden than Trump too. And Sleepy Joe seems to have made a good impression, with 50 percent overall saying they came away with at least a somewhat more favorable view of him versus 39 percent who said the same of Trump.

Second, even though the audience of 13-14 million people who watched each event is much larger than even the largest cable news shows (e.g., Tucker Carlson drew around 5.5 million last night), it’s a small fraction of what a debate would have drawn. The first Trump/Biden showdown brought in 73 million viewers, or roughly two and a half times the *combined* audience for last night’s townhall. Trump shouldn’t have backed out of the second debate when it went virtual.

Mystery solved? Not exactly. Last night Tucker Carlson devoted a segment of his show to how a package of documents …

Cuomo to “Anonymous”: How can we at CNN put you on the air when you lied to our faces — and our viewers?

“[T]he problem is with having lied is that now you are a liar, and people will be slow to believe you…”