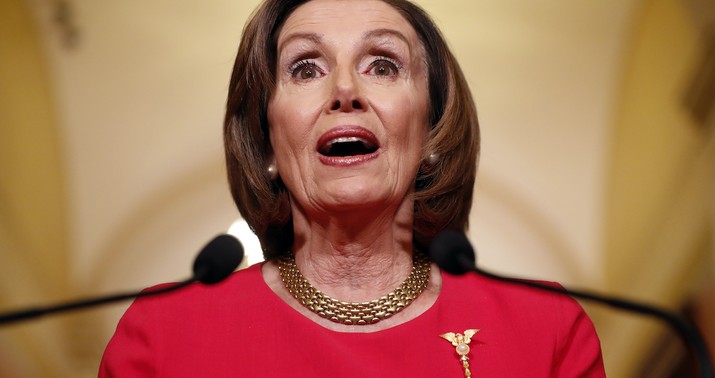 I thought nothing would top Gavin Newsom flouting his own COVID protocols to go clink wine glasses with his buddies at the French Laundry.

The outrage being expressed at the photo below on Twitter this afternoon is deeply bitter and bipartisan. It’s a bona fide “let them eat cake” moment, revealing that our leaders believe the sacrifices to be made in the name of defeating COVID should be made by the dirty rabble, not by Congress.

Don’t miss the forest for the trees, though. The most disgraceful thing about this photo isn’t the health risk this dinner will create.

.@SpeakerPelosi told me it’s safe. “It’s very spaced,” she said and there is enhanced ventilation and the Capitol physician signed off. pic.twitter.com/ZXjf72lnrP

Looks like the sort of barely “distanced” wedding reception that might get you fined or arrested in a lot of American states right now for violating indoor capacity limits.

Again, the proper target of the outrage isn’t that they’re flouting safety protocols, although of course that’s plenty outrageous. The proper target is the fact that these gutter psychopaths are feting each other on a day when American businesses are collapsing because our leaders don’t care enough about them to make a stimulus deal.

The situation is grim. Local news outlets are filled with stories of beloved institutions going under for good as they face a raging winter coronavirus outbreak, the specter of new health restrictions and no sign of federal aid to help carry them over into brighter times when a vaccine may be available.

From a famed New York City barbershop to an influential music venue in Athens, Georgia, the NBC News audience has shared the names of nearly 200 favorite businesses they’ve said goodbye to in recent months. It’s a list that undoubtedly will grow.

But the government isn’t moving. While there’s little dispute in Washington that aid is needed, the White House and Democratic and Republican leaders are far from an agreement. Even though key parts of the last financial stimulus package expired more than three months ago, each side is still holding out for what it hopes will be a better deal…

“I just sort of saw the writing on the wall, that we weren’t going to get any money in the near future,” [one owner who recently closed his business] said. “They care more about their election, and they don’t realize what’s happening in America.”

Our leaders are toilet mold. Here’s one explaining that she felt good about celebrating Biden’s win in a crowd last week because, after all, that crowd was going to be there celebrating whether she joined in or not. We could say the same about spending the evening crowded around a bar, no? If the bar’s open and people are there, they’re going to be there whether you show up to drink with them or not. So why not go?

.@chicagosmayor Lightfoot defends celebrating Biden’s Election Day in the streets despite her own rules against mass gatherings: "That crowd was gathered whether I was there or not." pic.twitter.com/MR81LnHfa7

“There are times when we actually do need to have relief and come together, and I felt like that was one of those times,” says Lightfoot. Times like … Thanksgiving?

I wonder how many people in Chicago are going to die in the next few weeks from chains of transmission started by her and her idiot audience because their urge to cut loose was too important to stifle.

Lightfoot, Newsom, Pelosi, Congress: This is the leadership class. The people who set the policy and *should* have a duty to set an example. Many of whom fancy themselves devotees of science.

Seriously, though: Don’t let the fact that we’re led by human garbage lead you to behave as badly as they do. Have Thanksgiving with your household, not your extended family. It’s a sacrifice, but right now it’s possible given the acceleration in cases that we’ll reach 3,000 deaths per day at some point this winter. 9/11, every single day. That’s not necessarily the upper bound either; if hospitals are forced to turn people away because they’re overcrowded, all bets are off on where this goes. The situation is already sufficiently dire that Doctors Without Borders is sending people here when normally it’s American and other western doctors who are deployed abroad to handle crises. Don’t be a Pelosi on Thanksgiving. Who would want to be so wretched?

CNN's @drsanjaygupta on how bad COVID is in USA rn: "Doctors Without Borders have come to the United States to do their work. They go to the hottest spots in the world, they look at the Earth and say where are we needed? Well, they're needed here in the United States right now." pic.twitter.com/joma1DFOPi

Update: Mediaite has a long round-up of tweets from liberals chiming in on how repulsive this congressional dinner is.

Update: The word “allow” is doing a lot of work here. Does this mean the dinner was canceled and members *had* to get their food to go, or were they permitted to attend the dinner as scheduled if they so chose?

Our office strictly follows the guidance of the Office of Attending Physician, including for this dinner. To be a further model for the nation, this event has been modified to allow Members-elect to pick up their meals to go in a socially-distanced manner. https://t.co/s2pSyUOCbm