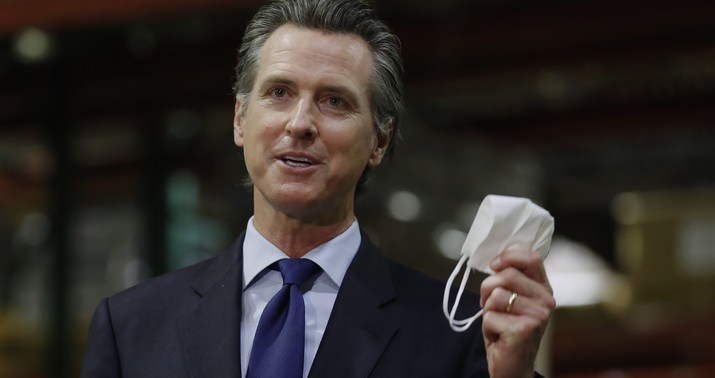 If I’m not mistaken, he was exempt from the state rules pursuant to the overarching national rule that liberals are entitled to ignore social distancing guidelines so long as it’s for an Important Cause™. Like holding mass demonstrations against police brutality.

Or smoking weed in a park with strangers to celebrate Trump losing.

To my dying day I’ll believe that a person should conduct themselves responsibly irrespective of what others do. But how mad can one be at Californians who’ll hear this news about Gavin Newsom and think, “F*** it, I’m having a big family Thanksgiving”?

The dinner the night of Nov. 6 at the famed French Laundry in Yountville in Napa County brought together at least 12 people to celebrate the 50th birthday of Jason Kinney, a longtime friend and political adviser to Newsom who is also a partner at the lobbying firm Axiom Advisors. In addition to the governor, his wife, Jennifer Siebel Newsom, was in attendance.

State guidelines limit gatherings, defined as “social situations that bring together people from different households at the same time in a single space or place,” to no more than three households. Representatives for Kinney and Newsom declined to specify how many households the diners represented, but did not dispute that it was more than three.

Nathan Click, communications director for Newsom, defended the birthday celebration because it took place outdoors at a restaurant, which must follow separate coronavirus safety regulations developed by the state for the dining industry. That guidance is silent on whether people from more than three households can dine together…

Click said the birthday dinner for Kinney was permitted because state guidelines require only that restaurants “limit the number of patrons at a single table to a household unit or patrons who have asked to be seated together.”

I’d much prefer to believe that Newsom thinks he’s above the law than that California’s state guidance really does amount to “no gatherings of more than three households *unless* you’re at a restaurant.” That’s completely idiotic, as restaurants have been flagged by the CDC and other experts as the engines of COVID transmission this past spring. The masks come off, people talk and laugh, aerosols are exchanged in close proximity. It’s good that Newsom’s event was held outdoors, at least, but it’s inexcusable to have a rule in which you’re allowed to bring a small crowd together so long as you make sure to do it in one of the riskiest possible venues.

And it’s emblematic of how hazy the logic has gotten behind some of the guidelines included in the patchwork quilt of COVID regulations, not just in California but everywhere. For instance, Andrew Cuomo can’t seriously believe there’s a special risk of late-night transmission at gyms that requires closing them down at 10. Like Newsom, he’s just flinging rules around now to achieve some sort of vague, incoherent compromise between keeping businesses open and limiting how much interaction people can have there. It’s not just the public that’s quit on trying to manage the pandemic effectively. Increasingly, politicians have too.

Some governors have been forced lately to make compromises that seem inexplicable to the point of recklessness — until you realize the extent of the crisis they’re facing. North Dakota’s going to allow asymptomatic health-care workers to stay on the job after they’ve tested positive for coronavirus, when they’re at risk of passing it on to others. How could they do something so insanely dangerous?

Simple: They don’t have enough health-care workers to cope with the colossal rate of infections in the state right now. They’re keeping wounded “troops” on the battlefield because otherwise they’ll be overrun.

North Dakota’s hospitals have reached their limit, and the coming weeks could push them past their capabilities, Gov. Doug Burgum said at a news conference on Monday, Nov. 9.

Due to a major shortage of health care staffing, the state’s hospitals have a severe lack of available beds. Rising COVID-19 hospitalizations and high noncoronavirus admissions, some resulting from residents who deferred health care earlier in the pandemic, have caused the crunch on medical centers…

In an attempt to alleviate some of the staffing concerns, Burgum announced that interim State Health Officer Dirk Wilke has amended an order that will allow health care workers with asymptomatic cases of COVID-19 to continue working in COVID-19 units at hospitals and nursing homes.

They’re going to limit the risk by restricting infected doctors and nurses to handling patients who already have COVID. Who knows if that’ll lead to more severe infections on either end of that equation as patients and medical workers end up absorbing higher viral loads from each other. But they’re up against it. Here’s what the positivity rate in the state looks like:

According to the department of health, there are more than 10,000 active cases of COVID right now in ND, a state with only 762,000 people. That’s a rate of better than one in every hundred North Dakotans who’s presumed to be carrying the virus right now. The chief officer at a hospital in a small town there told WaPo this week that she saw cases rising in September and October and tried to sound the alarm locally but “she would go outside and see no one wearing a mask or social distancing, ‘having giant weddings and going about their lives.’” Health-care workers across the map in hard-hit states are already burning out in trying to manage the patient load and we’re probably nowhere near how bad things will get before we hit the peak:

Intensive-care units are called that for a reason. A typical patient with a severe case of COVID-19 will have a tube connecting their airways to a ventilator, which must be monitored by a respiratory therapist. If their kidneys shut down, they might be on 24-hour dialysis. Every day, they’ll need to be flipped onto their stomach, and then onto their back again—a process that requires six or seven people. They’ll have several tubes going into their heart and blood vessels, administering eight to 12 drugs—sedatives, pain medications, blood thinners, antibiotics, and more. All of these must be carefully adjusted, sometimes minute to minute, by an ICU nurse. None of these drugs is for treating COVID-19 itself. “That’s just to keep them alive,” Neville, the Iowa nurse, said. An ICU nurse can typically care for two people at a time, but a single COVID-19 patient can consume their full attention. Those patients remain in the ICU for three times the length of the usual stay.

There are economic consequences too as the virus consumes a state, of course:

JPMORGAN: Chase card-spending has “fallen notably.. in a variety of retail categories .. There is some sign that recent declines have been largest in states where COVID-19 has been spreading most rapidly .. our tracker is down about 7%-pts over the last two weeks in North Dakota” pic.twitter.com/OmcLuEXMBd

I’ll leave you with this piece from the biggest newspaper in Newsom’s state, writing about a wedding reception that happened in August across the country in Maine. Total attendees: 55. Number infected: One. Casualties over the next 40 days, according to contact tracing: 176 infections, including seven deaths — and all of the deaths were people who hadn’t attended the reception. Something to think about if you’re going ahead with a big Thanksgiving get-together because of Newsom’s terrible example.