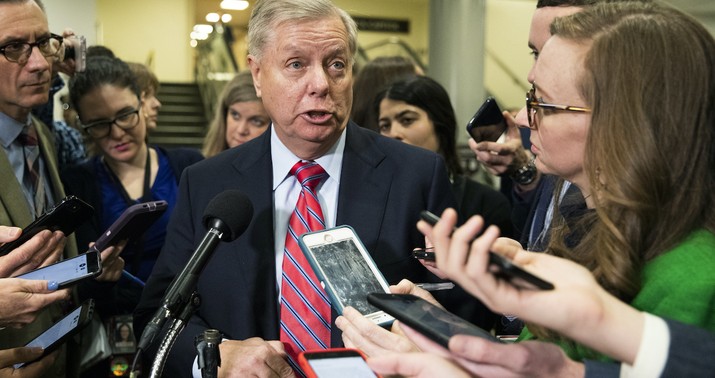 I mean, it’d be nice if *someone* were getting a presidential intelligence briefing. According to Trump’s public schedule, the last one he had was on October 2.

Other Senate Republicans have called today for letting Biden be briefed, as Ed noted earlier, but Graham’s a special case because he’s the first real Trump crony in the chamber to do so. I don’t take this as a sign that he’s going to break with Trump on the “voter fraud” claims anytime soon, though. Remember, Graham is one of the people entertaining the nuclear scenario in which state legislatures like Pennsylvania’s simply void the election on pretend fraud grounds and award the president their electors. If anything, he’ll stick with Trump even longer than his colleagues in the Senate will.

I think his interest in letting Biden be briefed has a simpler explanation. Graham’s defining political trait is his hyper-hawkishness and he’s understandably worried that if intelligence is secreted away from the incoming Biden administration they might be slow-footed next year in detecting foreign threats.

“Yeah, I think he should,” said Graham, a close ally of President Trump…

Graham said he has not expressed his thoughts with the White House but said, “I hope so,” when asked if he expects Biden to get the briefings soon.

On Tuesday two former chiefs of staff, John Podesta and Andy Card, flagged the delayed transition after the contested 2000 election as a factor in the 9/11 attacks. “When the 9/11 Commission finished its report, it found that the delayed transition ‘hampered the new administration in identifying, recruiting, clearing and obtaining Senate confirmation of key appointees’ in the national security arena,” Podesta and Card wrote. “The commission also concluded that avoiding future disruptions in transitions was deeply in the national interest.” What’s more, Card and Podesta noted that Bush *did* start receiving intelligence briefings even as the litigation was playing out in Florida. The delay that damaged the transition was GSA refusing to release transition resources to the Bush campaign because it couldn’t fairly “ascertain” him as the winner until after the court battle.

The 2000 election was incredibly tight, with Bush and Gore separated by fewer than a thousand votes in a single deciding state. The current election is nowhere near as close as that and there’s no decisive litigation pending anywhere. Biden’s not even getting the intel briefings that Bush got, and GSA hasn’t released transition resources to him even though the same agency made an “ascertainment” that Trump had won the election the day after the vote in 2016. Biden’s all but guaranteed to end up with the same number of electoral votes Trump had that year and margins in close states like Wisconsin, Georgia, and Arizona comparable to the margins Trump enjoyed in Wisconsin, Michigan, and Pennsylvania four years ago. And he’ll have won the popular vote comfortably, not lost it. (Right, granted, Hillary conceded the day after the 2016 election whereas Trump hasn’t conceded this year, but GSA has never required a concession to “ascertain” who won.) There’s no reason why an “ascertainment” shouldn’t be made on Biden’s behalf in the interest of national security, to get the new team up and running as quickly as possible. It’s pure spite by Trump and pure intimidation felt by his deputy at the GSA that’s holding this back.

If there’s anything that might drive a wedge between the president and the Senate Republicans who are momentarily giving him cover in obstructing the transition, it’s the damage a frozen transition might do to foreign policy and national security. For all the ways that Trump has influenced the party, there’s not much evidence of him shifting congressional Republicans towards a more dovish stance on, well, anything. Some of these people, like Graham and Marco Rubio, define themselves by their advocacy for a “muscular” policy abroad. I imagine they’re already nervous about what’s going on at the Pentagon, with Mark Esper ousted and a variety of Trump cronies installed in top positions (which may or may not be a prerequisite to implement an upcoming withdrawal from Afghanistan). But if Trump ends up decapitating U.S. intelligence, tossing Gina Haspel and Chris Wray into the trash bin, that’s where I think even the Grahams and Rubios might start getting more vocal about Trump having lost the election.

Trump may realize that too. It’s noteworthy to me that he dumped Esper but hasn’t made any moves yet against the leaders of the “deep state” about whom he complains so much. Republican senators are reportedly urging him not to fire Haspel and Bill Barr has stuck up for Wray in the past. Maybe Trump believe that he can’t afford to do anything to piss off Senate Republicans too much at a moment when he needs some cover from party leaders on his desperate search to prove voter fraud. Once he gives up on winning, *then* he’ll fire Haspel and Wray.

I’m morbidly curious to see how the hawks in the Senate react to this impending move too:

Top U.S. cybersecurity official Christopher Krebs has told associates he expects to be fired by the White House, three sources familiar with the matter told Reuters…

[H]e drew the ire of the Trump White House over a website run by CISA dubbed “Rumor Control” which debunks misinformation about the election, according to the three people familiar with the matter.

White House officials have asked for content to be edited or removed from the website, which has pushed back against numerous false claims about the election, including that Democrats are behind a mass election fraud scheme. In response, CISA officials have refused to delete accurate information.

In particular, one person said, the White House was angry about a CISA post rejecting a conspiracy theory that falsely claims an intelligence agency supercomputer and program, purportedly named Hammer and Scorecard, could have flipped votes nationally. No such system exists, according to Krebs, election security experts and former U.S. officials.

A capable cybersecurity official being canned because he wouldn’t promote Trump propaganda that wrecks public trust in American elections is just the perfect banana-republic note on which to wind down this era. I wonder if Lindsey Graham will say a word about it when it happens. On the one hand, he pretends to care about national security, including cybersecurity. On the other hand, his duties as a crony require him to feign credulity in the Hammer and Scorecard conspiracy theory. Dilemmas, dilemmas.

We may also be approaching the point where House Democrats start leaning on GSA to release transition resources to Biden. I think Biden’s keeping them at bay for now in the hope that Trump will grasp that he’s not winning in court and start to ease off the obstructionism without any official pressure; the country doesn’t need any dramatic forms of escalation right now. But that’ll end if there’s a serious legal effort to stop states from certifying their results, or if there’s some desperation play after the certification to try to steal electors somehow. That’s when we might see House hearings. If it drags on into December, I wonder if we might even see impeachment again. Probably not — Dems don’t want to do anything that might damage them in the Georgia runoffs — but they’re not going to be passive about this until January 5.

I’ll leave you with this from Barack Obama, a man who’s wrong about a lot of things but not everything.

Lindsey Graham is the guy in the spy thriller or heist movie “who double-crosses everyone to save his own skin.” — @BarackObama in his memoir.