Trump: ABC/WaPo is guilty of having produced a “possibly illegal suppression poll” 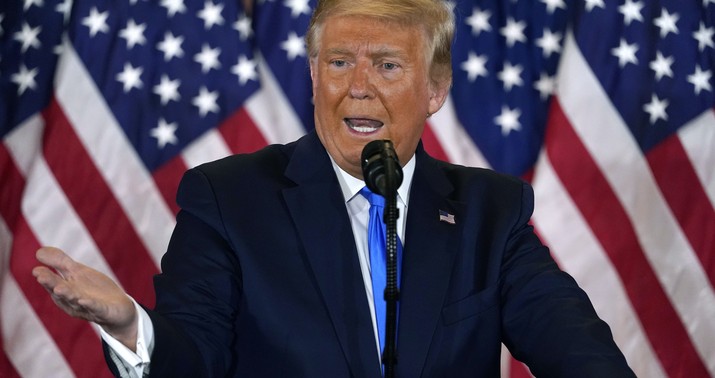 Nothing portrays seriousness of purpose in alleging widespread voter fraud like pausing to fart out the idea that it should be against the law to publish an outlier poll.

The Fake Pollsters at @ABC/@washingtonpost produced a possibly illegal suppression Poll just before the Election showing me down 17 points in Wisconsin when, in fact, on Election Day, the race was even – & we are now preparing to win the state. Many such “deplorable” instances!

I don’t know why he’s singling out ABC/WaPo. Their margin was the most outlandish among the field surveying Wisconsin, sure, but every other poll of the state in the final weeks of the race besides Trafalgar’s had Biden winning in a walk. Reuters had him up by 10 points in its final poll. The New York Times had him up 11. I also don’t know why he’d assume that those garish leads hurt him more than they hurt the Democrat. I won’t revisit the substance of this post at length here, but Trump had a more enthusiastic base than Biden did and thus Biden’s more lukewarm supporters in Wisconsin may have taken the polls there as evidence that they didn’t need to turn out for him after all. Suppression polls versus complacency polls: Choose your own adventure.

We’re nearing the end of phase one of Trump’s face-saving “I was cheated” operation. Phase one is the “respectable” phase, where he insists on recounts and uses the time to scrounge for evidence of actual fraud in hopes of making something happen in court. He’s within his rights to do that, even if he’s acting in bad faith considering that most of the suits brought thus far are borderline frivolous. In fact, some claims popular among the base are so frivolously conspiratorial that Trump’s lawyers aren’t even pushing them in court (and some of Trump’s own DHS employees are swatting them down). “[T]he Trump legal team isn’t presenting the arguments made by the super sleuths on twitter and they should probably ask themselves why that is,” said Seth Mandel. At the moment, most of the litigation involves penny-ante attempts to get 100 or so Biden ballots here or there thrown out. The most ambitious effort so far would declare 10,000 or so ballots in Pennsylvania that arrived after Election Day to be illegal. But they’re meaningless to the outcome in the state — Biden will win by 50,000 votes or more even if those late-arriving ballots are trashed.

Then there’s this. Think the Supreme Court’s gonna toss out 50 million votes or whatever based on this logic, which could have been litigated months or years ago?

The basic claim at the heart of Trump’s new PA lawsuit is that mail-in voting *itself* is unconstitutional.

Never mind that we’ve had it for decades.

Never mind that they’d had months to make this argument.

Never mind that it would disenfranchise tens of millions of Americans.

Jim Geraghty has a very good, clear-eyed round-up of where the litigation stands. None of these suits are within a thousand miles legally of the sort of gamechanger that might invalidate a state’s result and put Biden’s national victory in doubt. The New York Times called around to election officials in all 50 states yesterday to ask if they’re aware of any irregularities that might have affected the outcome in their state. They went 0 for 50. Increasingly officials around Trump are admitting to the media that yes, this legal effort is kabuki:

“This is unsustainable,” a senior White House official tells me, emphasizing there’s no path to victory for Trump: “It’s not wrong for Biden’s team to call it ‘theater.’” https://t.co/7WPWAScn7J

A Republican source pointed out to me that Trump is doing to the entire Republican party — with a few exceptions — what he did to Sean Spicer the day of his inauguration: making them blatantly lie to protect his ego.

Trump allies like Ted Cruz have begun complaining that Trump needs to bring in “significant additional legal firepower” to fight this battle, which correctly signals pessimism that it can be won while also conveniently sidestepping the fact that it’s the lack of evidence, not a lack of acumen among his attorneys, that’s hurting Trump’s “voter fraud” crusade.

All of which is a long way of saying that, for the moment, this is farce. It’s a simulation of a serious legal effort to contest an election that appears incontestable in order to salve Trump’s hurt feelings, polish his brand as a “fighter,” and keep the money flowing in from his fans. The pretend skepticism being shown by Republicans doesn’t even have an internal logic:

Last week’s Senate and Presidential races were decided on the same ballots.

You can’t accept the results of one without the other. https://t.co/5qtzRY2QMF

Just leaving a reminder here that every single Republican Senator and Congressman currently in office claimed victory in their most recent campaign after ~the media~ called it for them.

If widespread fraud elected Biden, we need to see those fraudulent ballots to make sure they didn’t fraudulently elect any Republicans too. And if the outcome of the presidential election can’t be known until the states certify their results, there’s no reason for any congressional Republican to have declared victory yet. So why did they?

Conservative Henry Olsen points out another silly flaw in the “conspiracy” logic. If you were going to rig an election for your side, says Olsen, logically you’d focus on swing states, not red or blue ones; you’d run up the score in districts that are under your party’s control, where you have a better chance of hiding the evidence; and the result of your fraud would show unusually large shifts towards your guy relative to trends in recent elections. In reality, none of that was true. Biden improved on Hillary Clinton’s showing across the board, even in red states. He didn’t have freakishly high turnout in blue districts relative to turnout for Trump in red districts. (Trump actually improved on his 2016 showing in deep blue Philadelphia.) And there are no unusual outliers in terms of patterns produced by the last few electoral cycles. Biden continued a suburban trend towards Democrats in certain areas that had been trending blue in 2016 and 2018.

Fox is so desperate for plausible claims of fraud to wow their viewers with that they resorted to this last night. If you were going to rig an election on behalf of Biden and Harris, would you roll up to the polling place in … a “Biden-Harris” van?

This is where we're at right now.

Laura Ingraham brings on an unidentified "whistleblower" — with hidden face and altered voice — to claim that folks literally from a Biden-Harris bus were altering ballots in Nevada. pic.twitter.com/b8xGe8KXSb

None of it makes any sense. Fortunately for Trump, it doesn’t need to make sense to achieve his goal of giving fans a pretext to view him as the “real winner” of the election. Unfortunately for him, judges are going to demand more.

As I say, this is the “respectable” phase of the operation, the court battle and the noise around it. It’ll go on for the next week, until states move to certify their results. Team Trump will try to halt that in court, but absent clear proof of fraud they’re not going to get a judge to do that. That’s when we’ll begin the much more dangerous and illegitimate phase two, which is when Trump starts putting political pressure on state officials not to certify the results. If Brian Kemp, Doug Ducey, or state officials in Pennsylvania start scrambling to block the certification absent any credible evidence to doubt the result of the vote, this will shift suddenly from face-saving farce to nascent coup. In fact, there’s already loose chatter about Pennsylvania’s state legislature possibly stepping in to declare Biden’s victory tainted and then sending their own pro-Trump slate of electors to the electoral college. In September Barton Gellman wargamed the worst-case scenario for the election — one where Trump loses, predictably can’t accept it, and then tries to activate Trump cronies at the state level under a flimsy pretense of widespread fraud to declare him the winner no matter how the people of that state voted. That would be an all-out coup against the duly-elected incoming government. According to Gellman, some local Republicans had already discussed it:

In Pennsylvania, three Republican leaders told me they had already discussed the direct appointment of electors among themselves, and one said he had discussed it with Trump’s national campaign.

“I’ve mentioned it to them, and I hope they’re thinking about it too,” Lawrence Tabas, the Pennsylvania Republican Party’s chairman, told me. “I just don’t think this is the right time for me to be discussing those strategies and approaches, but [direct appointment of electors] is one of the options. It is one of the available legal options set forth in the Constitution.” He added that everyone’s preference is to get a swift and accurate count. “If the process, though, is flawed, and has significant flaws, our public may lose faith and confidence” in the election’s integrity.

It’s true that the Constitution empowers states to choose their electors however they wish, although it’s debatable whether they can change their minds after they’ve already committed to letting voters decide. (Of course, it’s also true that the Constitution permits the vice president and the cabinet to remove the president for “incapacity” subject to ratification by Congress. I doubt Trump fans would have trouble calling that a coup even though it followed constitutional procedure.) Some Pennsylvania politicians are already beginning to flirt with the coup scenario:

PA's state senate majority leader, Jake Corman (R), has said for months that the state legislature plays no role in appointing electors, according to PA law.

One would think Pennsylvania’s legislators might grasp that invalidating an election to appease a strongman’s ego would be a declaration of out-and-out war, but the logic of Trump bootlicking requires prioritizing his feelings over the basic stability of the United States. Then again, it’s worth an occasional reminder that PA alone can’t do it for Trump: He’d need to get Pennsylvania, Georgia, and one other state to pull a coup on Biden and their voters in order to push the Democrat below 270 electoral votes.

The fact that anyone is so much as idly speculating about states overturning their own elections today absent any proof of game-changing fraud is the surest sign yet that this country is on its way to collapse. The collapse has already begun; it’s a process that happens “gradually, then suddenly,” as Hemingway famously described bankruptcy. I think we’re still in the “gradually” phase but I wouldn’t bet a lot of money on it at this point. Heath Mayo summed up my feelings about the past week better than I can: “The vindication of the Never Trumpers wasn’t the election results. It’s what’s happening right now.”

I’ll leave you with this, since we’re still in the “farce” phase.

Fox News personalities have dramatically shifted their rhetoric on election results over the past four years.

Six Holiday Gift Ideas For The Gun Owner In Your Life

CDC Admits Their Numbers on COVID Are off by a Huge Amount.