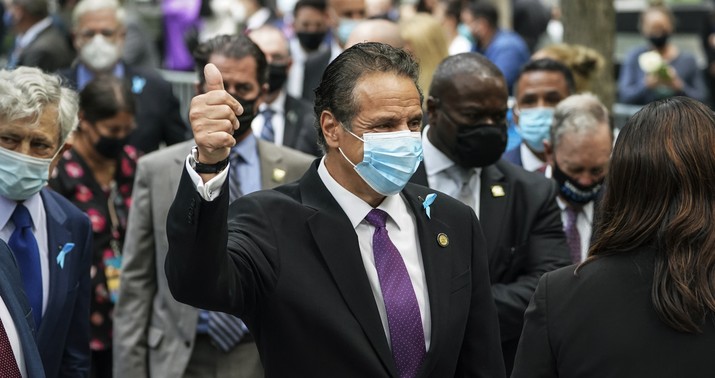 Count me among the many people mystified by the logic of these orders, especially the one pertaining to gyms.

NYS is taking action to stop the spread in response to rising COVID numbers.

Any establishment with a state liquor license, including bars and restaurants, must close at 10pm.

Gyms must also close at 10pm.

What does this guy think happens in a gym after 10 p.m. that makes that an unusually infectious period of the day requiring forcible closure? I understand the argument with respect to bars. As the evening wears on, people get drunker and louder and more social. They crowd together at the bar, they shout. Particles are spewed in all directions. Close the bar before the drunkest period, when inhibitions are at their lowest and masks are more likely to come off, and you’ll probably prevent some infections.

I … sort of understand it with respect to restaurants. People aren’t crowding around each other in groups but they’re talking throughout the meal and that puts particles into the air too. Make the restaurants close early and you’re basically imposing a “reduced capacity” restriction on them. Someone who might have come in for a very late dinner and gotten infected then will be shut out now.

Although, in that case, why not just issue a “reduced capacity” order and let restaurants close when they like?

Closing down gyms at 10 p.m. makes no sense. There’s not much talking happening in a gym. People aren’t crowding each other. If anything, letting night owls work out in the wee hours means the clientele will be less concentrated during the business day, which is a good thing in reducing spread.

As for the rule limiting private gatherings to 10 people, we’ll see how eager the NYPD is to break up some family’s Thanksgiving. It’s effectively unenforceable, although (a) it does give the cops a reason to intervene when there’s a more dangerous larger gathering like a house party happening and (b) it’s a way to drive home to New Yorkers how risky the situation is right now. The state still has one of the lowest positivity rates in America after Cuomo’s mismanaged spring apocalypse culled the feeble, but it’s ticking upward:

Today's update on the numbers:

Total hospitalizations are at 1,628.

The basic logic in wanting to limit the public’s time spent in shared indoor spaces is sound even if the particular logic of a 10 p.m. curfew for gyms, say, is not:

Restaurants, gyms, cafes and other crowded indoor venues accounted for some 8 in 10 new infections in the early months of the U.S. coronavirus epidemic, according to a new analysis that could help officials around the world now considering curfews, partial lockdowns and other measures in response to renewed outbreaks…

“Restaurants were by far the riskiest places, about four times riskier than gyms and coffee shops, followed by hotels” in terms of new infections, said Jure Leskovec, a computer scientist at Stanford University and senior author of the new report, in a conference call with reporters. The study was a collaboration between scientists at Stanford, Northwestern University, Microsoft Research and the Chan Zuckerberg Biohub…

In Chicago, for instance, new infections occurring at just 10 percent of indoor venues accounted for 85 percent of the predicted infections. Reopening just full-service restaurants, the analysis found, would have resulted in an additional 600,000 new infections by the end of May.

If restaurants and gyms are key vectors of transmission and the pandemic is now at the most severe point that the U.S. has experienced, the logical thing to do is to order restaurants and gyms closed. But even a paternalist like Cuomo is reluctant to do that. For one thing, Congress choked on passing a new round of stimulus relief so there’s no help right now for businesses that are shuttered. For another thing, Americans are tired of lockdowns:

They’re tired of voluntary social distancing too. The same poll found that 69 percent said they were mostly or completely isolated in April; today the share that says the same is 38 percent. And that’s despite the fact that the percentages who say the situation is getting worse and that they’re at least somewhat worried about getting infected are both up sharply since last month. Americans grasp that the situation is growing dire. They’re just not prepared to do much about it right now. In a few weeks, when we’re at 200,000 cases per day and knocking on the door of 2,000 daily deaths again, we’ll see. Cuomo said that a “closedown” would be on the table again if today’s limited measures didn’t succeed in reducing the spread in New York. We’ll see about that too.

I completely agree. The false dichotomy of full lockdowns and a total free-for-all being the only options has allowed the terrible "herd immunity via mass infection" proposals to gain traction.

We need to move away from this binary understanding to employ these targeted measures https://t.co/4HDhGwZvMX

Exit question via Ben Shapiro: Is Cuomo already working on a postscript to his “how to beat a pandemic” book to reflect the fact that the pandemic wasn’t beaten?