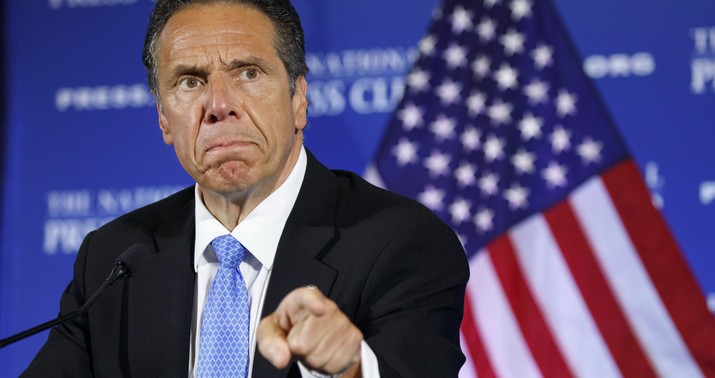 I could understand his book being a big seller if it were a frank admission of the 8,000 things he’d done wrong after the virus arrived in New York, starting with his almost mythically imbecilic order to send infected nursing-home residents back into their facilities.

Imagine the pandemic equivalent of O.J.’s “If I Did It.” It’d be a page-turner!

But who would pay actual U.S. currency to read propaganda from this tool about how he’s the Churchill of COVID-19 after the virus ran roughshod over his state in March? He’s like a French general publishing a book in 1944 on how to defeat the Nazis.

Or 1943, rather. The pandemic isn’t over yet. What’s the general doing writing books when there’s still an “occupation” to undo?

Let's learn the lessons of the Spring to be smart in fighting back this virus now.

Thank you for reading. https://t.co/IknPiDBMH5

The first “lesson of the spring” is this: Don’t sit around for weeks with your thumb up your ass as the virus rampages through the population while even atrocious leaders like Bill de Blasio are warning you that it’s time to act.

Imagine if the French general in my example not only took time out from the war to write a self-serving book about leadership but actually went on a book tour at the time to sell it:

The Democratic governor has been promoting his new book with a series of television interviews and virtual events in recent weeks, appearing on a variety of national shows and even a private webinar with more than 400 employees of top law firm Skadden Arps, which bought each participant a copy of the book…

Cuomo’s promotional tour — which has come while New York has seen an increase in COVID-19 cases, though it still fares better than most other states — has drawn criticism from President Donald Trump, a Republican whom Cuomo repeatedly knocks throughout the book.

“Governor Cuomo has shown tremendously poor leadership skills in running N.Y.,” Trump posted Monday on Twitter. “Bad time for him to be writing and promoting a book, especially since he has done such a poor job with Covid and Crime. So many unnecessary deaths.”

What sort of challenging interviews with tough journalists is Cuomo sitting for as part of his PR push, you ask? Behold:

Some reporters are aghast at Cuomo’s tone-deafness — including Chris Cuomo’s colleague at CNN, Jake Tapper, who retweeted this post from Yashar Ali:

The amazing thing about Cuomo pushing his book right now is that there’s no political reason for him to do so. He’s not up for reelection until 2022. There are rumors that he might be in line for a Biden cabinet position, but his book won’t matter to that — unless it backfires on him by grossing so many people out that Biden ends up thinking twice. He’s a rare pol who seems to have written and published this for no better reason than that his vanity demanded it. He loves the image that the media’s created for him as a hero of the fight against coronavirus, so much so that he’s let it blind him to how some of his public posturing about the pandemic comes off. Remember that cutesy-poo poster he put out depicting New York’s catastrophic epidemic curve as a mountain that he and New Yorkers had triumphantly scaled together, replete with funny little asides about his daughters’ boyfriends and such?

My read on him has been that he’s a terrible manager in over his head who can’t accept blame for his own errors but at least had the good sense to project the right tone in his public statements about the virus, unlike certain people whom we needn’t name here. Tiana Lowe read his book, though, and came away thinking he’s probably a sociopath. I say we split the difference: He’s a sociopath who’s in over his head.

Which, in fairness, makes him no different than about three-quarters of our political class.

Exit question: Am I wrong to find comfort in the fact that Cuomo’s “only” seventh on the bestseller list? Given the media hype about Cuomomania, especially in New York, I would have guessed there’d be more demand. Maybe the myth of Cuomo the COVID-tamer is finally slowly dying, just like New York’s 33,000 coronavirus victims.