Is the White House done with the pandemic? 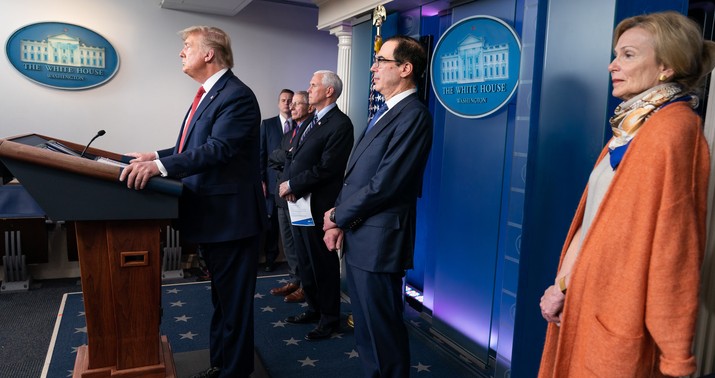 I know they’re all busy right now with the kabuki legal effort to soothe the president’s bruised ego over the election but there *is* a major crisis unfolding and they … just don’t seem very interested in it.

Asking for leadership and empathy is asking too much, I realize, especially after Americans committed the unforgivable sin of preferring someone else as president. But you would think the White House might want to make a pretense of caring if only to not cede that ground to Biden at a moment when they’re kinda sorta fighting for a second term.

Trump is all about “optics” usually. Who has the better optics right now: The president-elect who held a COVID update yesterday or the incumbent president who’s spending most of his time sputtering conspiracy theories about the election on Twitter?

The fact that testing was so poor in the spring and therefore we don’t know how many people were infected during that lethal first wave has led us all into believing that March and April were the peak of infections — especially severe infections — and we’ll never make it back there this fall. The hospitalization data this week contradicts that. The number of people who need hospital care doesn’t depend on testing, after all; it’s an absolute measure of how wide the spread is. Which means, at the moment, it’s as bad as it’s ever been with no reason to think it’s not about to get much, much worse:

COVID is about to explode. COVID IS ABOUT TO EXPLODE. Everywhere. Where is the plan to transfer health resources using our strategic lift capability? Where is the plan to move patients to hospitals with capacity? People are going to die by the truckload. Government DO SOMETHING!

Covid hospitalizations are rising quickly. We need to start discussions about how we preserve health system capacity given the velocity of this growth in hospital and ICU admissions, and the fact that it will be harder to backstop hospitals given how distributed the epidemic is. pic.twitter.com/euz1iWFkdq

We’re in a different position today than we were in March in terms of people dying from COVID. *If* you can get a hospital bed, you stand a better chance of having your life saved, as my colleague Ed Morrissey was recently reminded. But I’m not sure we’re in any better position than we were eight months ago when it comes to protecting hospital capacity. There’s no over-the-counter treatment for the disease to help you conquer it at home. Remdesivir is available, but that’s administered via IV — at the hospital. Dexamethasone is available by prescription, but that’s only for cases where the disease has already turned severe.

The “flatten the curve” messaging from the spring is just as urgent today, if not more so. Who’s delivering that message? Sporadic CNN interviews with Anthony Fauci ain’t gonna hack it.

We just had some good vaccine news, how should Americans plan in the meantime? We have holidays around the corner, potentially with 200,000+ cases a day by then, and CDC just issued new guidance. Is there any major WH-led effort to tell families how to plan for Thanksgiving?

The WH Task Force has warned for months bars and indoor dining contribute to outbreaks and now we have tons of outbreaks. Is there a plan to keep owners from going bankrupt during the winter? Is there any coordinated message for officials trying to balance health and economy?

If you’re reading this you’re a news junkie, which means you have more information about the pandemic than the average American does. I wonder to what degree the average person is missing the updates about how dire the spread of the virus is right now but heard the big news about Pfizer’s forthcoming vaccine on Monday and concluded, “Vaccine’s right around the corner? Now we can cut loose!”

Biden can fill the messaging vacuum left by Team Trump to some degree but he can’t fill a logistical vacuum:

Meantime, the Strategic National Stockpile, the nation’s emergency reserve, has only 115 million N95 masks, far short of the 300 million the administration had hoped to amass by winter, Rear Adm. John Polowczyk, who retired on Monday as the national supply chain commander, said in a recent interview, though he added that the government is continuing to expand its supplies of protective gear…

Dr. Shikha Gupta, the executive director of Get Us PPE, a volunteer effort that matches available supplies to health care providers, said 70 percent of those requesting help from the organization last month reported being completely out of one type of critical gear. Masks, gloves and disinfecting wipes topped the list…

Governors are once again competing with one another and big hospital chains for scarce gear. Nursing homes are grappling with staff shortages, which have left hospitals unable to discharge patients to their care. In Wisconsin, the situation is so severe that health officials are mulling a plan to train family members of nursing home residents to fill in at facilities that lack enough workers.

Trump’s main contribution to the great “What to do about COVID?” debate this week was to wonder darkly if Pfizer and his own FDA conspired to delay the news about the vaccine until after the election. Always thinking of others, that guy.

Actually, I’d say his and Scott Atlas’s big contribution lately — besides sh*t-talking Fauci — is pushing a de facto “herd immunity” strategy in which the elderly are encouraged to self-isolate and everyone else just sort of enjoys the holidays as usual. That strategy has always been unworkable because the elderly, especially the feeble, do in fact need to interact with other people in day-to-day life to survive. Which is why infections have started rising in nursing homes again too:

Covid-19 cases in nursing homes saw a more than 40 percent increase from mid-September to Oct. 25 after seven weeks of steady decline, according to the most recent data. Nursing home operators and experts on long-term care say it’s basically impossible to keep the coronavirus from seeping in as cases spike in communities across the country.

The administration has improved testing and staff screenings at nursing homes since last spring, yet workers will inevitably bring the virus in with them. But Trump has repeatedly downplayed the virus while sidelining federal health officials, such as the nation’s top infectious disease expert Anthony Fauci, as cases surge across the country…

Across the country, nearly 15 percent of nursing home providers say they have less than one week of supply of at least one type of key personal protective equipment, such as gloves or masks. About 22 percent have a shortage of any staff, such as nurses, aides and clinical workers, according to a POLITICO analysis of the latest Centers for Medicare and Medicaid Services data from Oct. 25.

Even Sweden, which has been accused for months of following a “herd immunity” approach because it refused to order wide-scale lockdowns, has pushed harder lately for self-isolation by the population to try to slow the winter wave. It’s not working yet:

Outbreak continues to worsen. #Sweden now at a higher per capita level for cases and >35%* of USA level for deaths. Deaths continue to rise rapidly.

Deaths in Sweden remain lower per capita than they are in the U.S. (especially lately), probably because of the better baseline health among the Swedish population. What “herd immunity” would do to a population like ours, where heart disease, diabetes, and obesity are common, God only knows. But we’re probably about to find out. I’ll leave you with this reminder from The Atlantic that just because fewer people are dying of COVID now than they were this past spring doesn’t mean that’s destined to hold true. Quote: “Throughout the year, hospitals and health-care workers have issued warnings that if we do see hospitals overwhelmed, fatality rates will soar.”