Another report that Trump is talking about running again in 2024 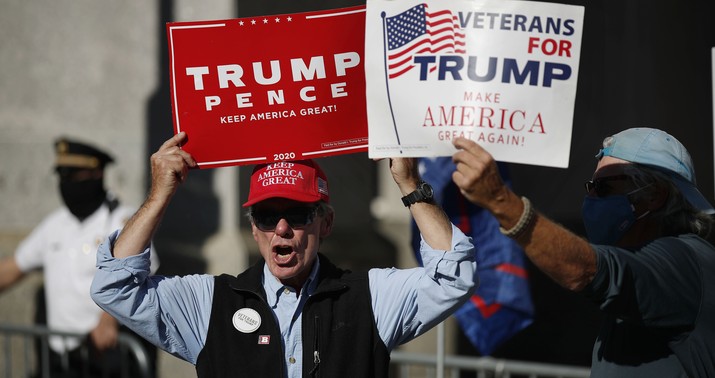 I said most of what I have to say about this last Thursday but I’ll add here that I suspect his own aides are egging him on about this as a way to to get him to concede. You can’t run in 2024 unless you accept that you’ve lost in 2020, after all. And getting Trump to accept that will be difficult, given his psychology.

His deputies’ main job from now until January 20 will be “mood management.” Even in the best of times, Trump is an erratic, belligerent figure who doesn’t care about American civic norms. At the worst of times, after losing a national popularity contest to a politician without charisma whom he doesn’t respect, who knows what he might do?

The Pentagon is apparently dealing with that perception abroad this afternoon:

General Mark Milley,JCS chrm, held "tank" meeting with joint chiefs and combatant commanders around the world in the wake of Esper being fired, a senior US military official said. Mil officials will now call counterparts to assure them the US military maintains its stability.

Why it matters: This is the clearest indication yet that Trump understands he has lost the 2020 election to Joe Biden — even as the president continues to falsely insist that he is the true winner, that there has been election fraud and that his team will fight to the end in the courts.

Be smart: Aides advising Republicans who are likely to run in 2024 are dreading the prospect of a Trump run given the extraordinary sway he holds over millions of GOP voters…

That fact alone could freeze the ambitions, fundraising and staffing of individual candidates — and of the Republican National Committee as it seeks to regroup and move beyond Trump.

Without question, that’s the best thing about the prospect of a Trump 2024 campaign. Whether or not he actually goes through with it, he’ll certainly tease the possibility to the very last moment — and by “very last moment,” I mean like the night before the 2024 Iowa caucus. His instincts for drama and dominance will forbid him from standing aside early and encouraging others to get in the race.

Which means all of the Republican senators and governors who’ve kissed his ass over the past four years in order to improve their chances in the 2024 primary will be jammed up for the next four years. Among hardcore Never Trumpers, the big failure of election night was that none of the president’s sycophants among the party’s leadership class paid any price. Susan Collins, who rubber-stamped Trump’s impeachment acquittal, won in a waltz. Thom Tillis, who opposed Trump’s “emergency declaration” to use defense funds to build the border wall and then cravenly reversed himself, should also win another term in North Carolina. Lindsey Graham, Trump’s most loyal toady, crushed Democrat Jaime Harrison despite Harrison raising an unprecedented amount of money. Trump himself was a bridge too far for American voters this time but the Trump cheerleading squad in the Senate paid no price. Republicans even gained House seats.

But the reckoning that was averted on election night will finally come if he runs in 2024, or even flirts with a run. The loudest Trump cheerleaders in the chamber and elsewhere will be stuck. What do you do if you’re Ted Cruz, Josh Hawley, Tom Cotton, Ron DeSantis, or Nikki Haley, knowing that you’ll need to start making hires, raising money, and putting an organization together after the midterms if you want to run for president but also knowing that Trump could jump into the race at any time and squash your chances?

It’s not like you can go ahead with the campaign and challenge him in the primary after he jumps in. That would be “disloyal.” You’d be forced to attack his record. You’d be accused of sabotaging the party’s chances in November by weakening him with your criticism.

Even if you were gung ho to do it, how many donors are likely to cut a check to you or to a Super PAC working on your behalf knowing that Trump might hold a grudge if they do so and could very well be in a position to act on that grudge depending on how the election goes?

The thing about turning your party into a personality cult is that everything then depends on the whims of the cult leader. Frankly, I wonder if Cruz et al. would prefer that Trump declare his 2024 candidacy immediately so that they don’t end up going to the trouble of putting together a campaign only to have him blow them up on the launch pad. But I don’t think he’ll do that. Again, he loves drama and he craves chaos. Better to keep everyone guessing, if only to remind them that they’re hostages to his moment-to-moment whims.

According to a senior administration official, John McEntee, director of the White House Presidential Personnel Office, is spreading the word throughout the administration that if he hears of anyone looking for another job they will be fired.

I don’t know how much leverage McEntee has in threatening people with termination who are going to be out of a job soon anyway. Maybe the bubble they’re in inside the building has convinced some of them that Trump really is going to be handed a second term next month by the Supreme Court, but I doubt it. More likely is that they’re taking McEntee’s threat as a promise that they’ll be blacklisted from jobs within the Republican Party in the future if they bail out now. He’s the right man to make that threat, as his job for most of the past year has been to go sniffing around for “disloyal” bureaucrats and have them purged. And given Trump’s sway over the GOP for the foreseeable future, he and his toadies really might be in a position to implement a blacklist. According to Axios, the head of USAID reminded his staff in a conference call today that “DC, at the end of the day, is a really small town” and that they should bear that in mind if they’re tempted to start behaving as if Trump lost. The people in charge here are nasty, vindictive cultists who are fully capable of holding a grudge against those who conclude that they should start sending out resumes given what’s going to happen on January 20.

But I’m glad. Again, it’s what they deserve. It’s not like the president didn’t warn them.

Graham — during an interview with Fox News Radio’s “The Brian Kilmeade Show” — did not acknowledge that Trump lost this year’s election and instead said that if the president “falls short” he should “not let his movement die” and should “consider running again.”

“I would encourage him to think about doing it,” Graham said, saying Trump should “create an organization, platforms over the next four years to keep his movement alive.”

“Grover Cleveland came back. Donald Trump should think about it if he falls short,” Graham added, referring to the only president to serve two non-consecutive terms.

In the last post I pointed out that Republican senators who’ve either just won reelection (Ben Sasse, Susan Collins) or represent states where they’re somewhat insulated from pressure by Trump (Mitt Romney, Lisa Murkowski) have been the first to acknowledge Biden’s victory. Graham could be part of that group if he wanted to be: He just fended off the most well-funded Senate challenge in American history with ease, winning by 10 points, and he’s had a warm friendship with Joe Biden for many years. One would think he’d feel a little more daring about accepting reality under those circumstances, but no. Whether because he’s a thronesniffer by nature or because he’s already plotting out his 2026 race and mulling over how Trump might punish him then if he concedes Biden’s victory now, Graham’s going to stick to the “fight on” strategy no matter what it means for the country. He’s one of the lowest, most self-interested careerists in the Senate, brimming with political instincts like hyper-interventionism that will harm the country long-term. I can’t believe anyone doubted that he would win reelection easily.