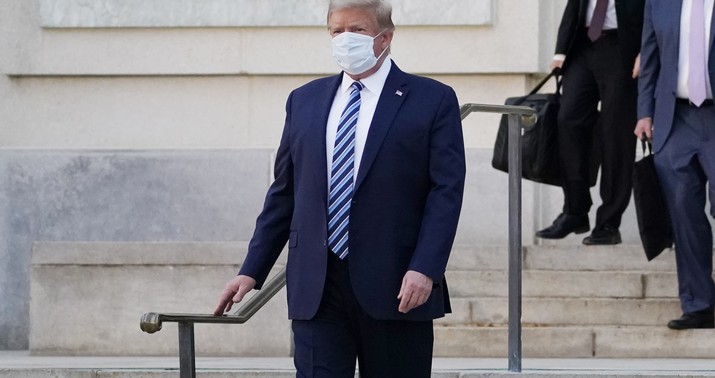 I’ve waited my whole life to write that headline. Just another gift from 2020, the year when anything can happen.

The claim here is so laughably absurd that it can only be true. Except for one thing — the only shirts Trump ever allows himself to be seen in are dress shirts with a tie and golf shirts when he hits the links on weekends. Would he really have broken that rule for a stunt as goofy as this?

Probable answer: If he was blasted out of his mind on dexamethasone, sure.

In several phone calls last weekend from the presidential suite at Walter Reed National Military Medical Center, Mr. Trump shared an idea he was considering: When he left the hospital, he wanted to appear frail at first when people saw him, according to people with knowledge of the conversations. But underneath his button-down dress shirt, he would wear a Superman T-shirt, which he would reveal as a symbol of strength when he ripped open the top layer. He ultimately did not go ahead with the stunt.

I wonder where he got the inspiration:

I’m genuinely interested to know how he was talked out of doing it. He reached the “YOLO” phase of his presidency long ago, and his campaign instincts are always and forever to do what he thinks will make his base happiest regardless of what the other 70 percent of the country thinks. MAGA fans would have fudged their undies with delight if he had emerged from his bout with COVID to prank the media self-styled as the Man of Steel. A million memes would have bloomed.

Did his staff tell him they couldn’t find a Superman tee in his size, maybe? Otherwise I can’t figure how a guy whose fondness for over-the-top pageantry involving tough-guy bravado ultimately landed him in the WWE Hall of Fame could be dissuaded from doing it.

Imagine one of his aides telling him “Decorum, sir.” Decorum?

Who needs decorum when you can make a real-life Carpe Donktum video?

On a more serious, semi-related note, this new data from Gallup about a COVID vaccine has been on my mind all day:

I’m not sure how else to read that except as a commentary on the two parties’ starkly different views of Trump’s credibility. What’s fascinating is that those views have been consistent for a long time, yet Democrats’ and Republicans’ willingness to be vaccinated has begun to shift only very recently. Why? Why did Dems nosedive suddenly in September but not in the months before? If you’re leery of trusting a guy in a Superman t-shirt on whether a rushed-through vaccine is safe or not, you should have been leery in August and July and June, etc, not just within the past few weeks.

Maybe the shift is due to Trump himself devoting more time lately to hyping how soon the vaccine will be ready in his public comments. As we get closer to Election Day and he keeps promising that it’s imminent, partisanship may be driving Republicans to become more accepting of it and Democrats to be more resistant. There may be substantive reasons for that — for instance, the more Dems are convinced that the vaccine is being rushed and corners are being cut in testing in order to hand Trump a political win before the vote, the less willing they may be to submit to the shot. But if that’s what’s happening, you’d expect Republicans to be more resistant lately too. What I think we’re seeing here is “logic” on the order of righties thinking “I’ll tell a pollster that I’m willing to get the vaccine because it’ll help Trump if I do so” and lefties thinking “I’ll tell a pollster that I won’t get the vaccine because it’ll hurt Trump if I do so.” That is, maybe the Gallup data isn’t so much a commentary on the trustworthiness of President Superman himself as a grim example of the two sides growing so intensely partisan as the election nears that even their views of a life-saving medication are being shaped by it.