White House: We think Senate Republicans will “go along” with a stimulus deal between Trump and Pelosi 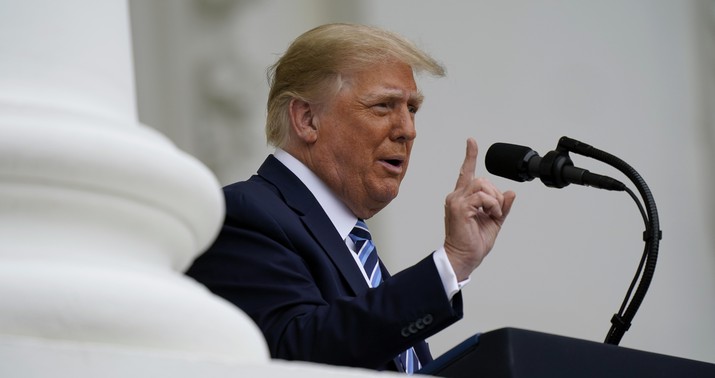 Try to wrap your mind around the possibility that the last few weeks of this race will be spent with Trump and Pelosi aligned against Senate Republicans on the terms of a stimulus package.

The chance of that is small. It would require the White House and House Dems to finally, finally, finally reach a consensus somehow on sticking points that have bedeviled them for months, starting with federal bailout money for state and local governments with budget deficits. Trump upped his offer this weekend to $1.8 trillion but Pelosi immediately dismissed it as “one step forward, two steps back” because they still can’t agree on particulars like weekly unemployment benefits. That’s probably how things will remain until Election Day, in a partisan standoff. Certainly that’s what Mitch McConnell is hoping, as that would be the least bad option for his caucus.

But Pelosi must be tempted at this point to take Trump’s offer and stick it to McConnell. If she and the president come to terms, suddenly Trump would be pitted not against Democrats but against his own party in the Senate. And since Trump is and can only be Trump, he’ll probably take to demagoging them publicly to try to pressure them into approving the deal. Imagine the president effectively campaigning against the GOP in the waning days of the race with several Republican-held Senate seats hanging in the balance. Imagine him losing the election after Senate Republicans refused to pass anything and laying the blame at their feet. What would that do to the post-Trump GOP?

The White House’s view, not unreasonably, is that if Trump calls McConnell’s bluff by reaching a deal with Pelosi, Senate Republicans will grit their teeth and pass it. Kayleigh McEnany made that point on Fox:

Larry Kudlow said the same thing yesterday in an interview with Jake Tapper:

White House economic adviser Larry Kudlow says he doesn’t think the stimulus deal is dead, despite President Trump’s $1.8 trillion proposal facing opposition from Senate GOP. “I think if an agreement can be reached, they will go along with it” https://t.co/Viunv4eaxp #CNNSOTU pic.twitter.com/RNV1O8GzSr

Take a minute to appreciate this. Twenty-two days out from an election, with no movement on a stimulus deal for months, the White House’s strategy for getting an essential fiscal rescue plan passed is to dare senators from his own party to oppose him. An obvious question: If Trump was willing to strong-arm the Senate GOP this way, why didn’t he do it back in August, when his polling was a bit stronger? Why wait for a cliffhanger right before Election Day that risks dividing the party before the big vote and making Trump look horribly weak if Senate Republicans end up defying him?

Mark Meadows and Steve Mnuchin held a conference call with McConnell’s caucus on Saturday. It did not go well:

“There’s no appetite right now to spend the White House number or the House number,” said Sen. Lamar Alexander (R-Tenn.), according to two sources briefed on the call.

Sen. John Barrasso (R-Wyo.) said that giving into Pelosi on anything seen as expansion of Obamacare in the next recovery bill will be seen as “an enormous betrayal by our supporters,” according to people familiar with the call…

This would be “the deal knell for our majority if Pelosi gets this win,” warned Sen. Marsha Blackburn (R-Tenn.), according to one source. Both she and Sen. Mike Lee (R-Utah) warned Republicans could lose support in the election if they accepted this.

“You all will have to come to my funeral,” Meadows reportedly said after hearing all that, knowing he’d have to relay the information to Trump.

Look at the names in that excerpt. Barrasso, Lee, and Blackburn all hold safe seats in red states and Alexander is retiring. It’s one thing for them to say “we can’t support a bill of $1.8 trillion of higher as we believe it’s fiscally irresponsible to do so, however dire America’s economic outlook might be.” (Kudlow suggested elsewhere yesterday that Trump would be willing to go even higher, beyond Pelosi’s sticker price.) But it’s insulting to our collective intelligence for them to pretend that there might be a voter revolt in red states if — gasp — Congress capped four years of profligate spending with one more stimulus blowout. No Republican voters are staying home this fall in protest if the Senate takes Pelosi’s offer; we’re fully five years removed from the tea-party movement metastasizing into a Trump cult, and that cult will happily support whatever Republicans might do to try to improve Trump’s reelection chances. The stimulus is the one thing left on the table that might matter. Certainly it would matter more to swing voters than rubber-stamping another Trump SCOTUS nominee.

What’s going on here is simple. Trump is drowning and, rather than toss him a life preserver that probably won’t save him anyway, the Senate GOP’s going to let him drown and protect itself. They’re betting that a Democratic wave three weeks from now will replace Trumpism with fiscal responsibility as the GOP’s new ideological guiding light. And so they’re pre-positioning themselves for it by balking at a stimulus deal. Their Faustian bargain with Trump produced three Supreme Court justices. They got what they wanted from the deal and now they’re done.

The question is when Trump realizes that and how he’ll react when he does. Will he simply sign on to Pelosi’s offer in desperation and demand that Senate Republicans pass it? Will he start attacking GOP candidates personally for “disloyalty”? I’ll leave you with this tweet from a few hours ago, in which an impatient Trump complains that Republicans are spending time on a Barrett confirmation hearing instead of following the ruthless power politics of this process to its logical conclusion, i.e. just holding a floor vote to confirm her now and moving on. The moment is coming when he’ll finally grasp that other Republicans in government don’t fear him the way they used to. Buckle up.

The Republicans are giving the Democrats a great deal of time, which is not mandated, to make their self serving statements relative to our great new future Supreme Court Justice. Personally, I would pull back, approve, and go for STIMULUS for the people!!!

All But the Lamest RINOs Are Getting Conserva-Woke Now