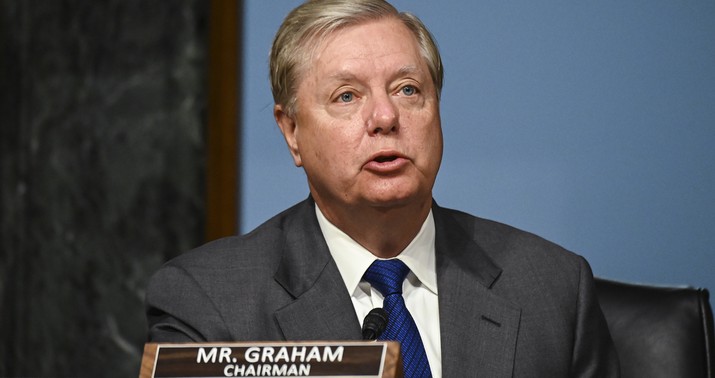 I can’t decide if this is nutty or actually clever.

The case for “nutty”: Normally the only time a politician is eager to skip a debate is if he’s up big and afraid of letting his opponent back into the race. (See, e.g., Biden vs. Trump.) Jaime Harrison isn’t up big and probably isn’t ahead at all. The race in South Carolina is a toss-up, with the public now paying close attention, yet here he is prepared to miss an opportunity to make the case to voters for ousting a longtime incumbent. Some might see that and feel annoyed that Harrison doesn’t think he has to work to earn their votes. Others might find it suspicious, believing that he’s looking for an excuse to dodge Graham because he fears he’ll lose the debate. (They’ve already debated once and Harrison did fine.) You don’t walk off the field with two minutes left in the fourth quarter and the score tied.

The case for “actually clever”: It looks *really* shady that Graham won’t just comply with Harrison’s request to take a farking test tonight before the debate. Apparently both men did so before their first contest. Then Lindsey went back to Washington and attended a Judiciary Committee hearing with Mike Lee shortly before Lee tested positive for COVID.

If Graham was willing to get tested before the first debate, why not tonight? What’s changed?

Harrison said CDC guidelines says a person should quarantine for 14 days if someone has been in close contact with someone who has tested positive for COVID.

Graham and Lee were seated three seats apart at a Judiciary Committee hearing not wearing masks, but they were in a large room and senators were spread out in order to socially distance…

Graham’s campaign on Thursday night provided a letter from Congressional Attending Physician Brian Monahan, who wrote Graham did not meet the criteria of being a “close contact” during the Oct. 1 Judiciary hearing. Monahan added Graham did not need to self-quarantine or have a COVID-19 test…

“If Sen. Graham will not take a coronavirus test, I cannot responsibly debate in person tomorrow night and allow politics to put my family, my campaign staff, Sen. Graham’s staff, and members of the media at unnecessary risk,” Harrison said.

They’ve been bickering about this on Twitter, where all the best political fights take place nowadays:

I'm excited for tomorrow's debate with @LindseyGrahamSC, but we need real leadership in this pandemic.

The debate moderators and I have agreed to take a COVID test prior to debating. I've scheduled my test, and I am calling on Sen. Graham to do the same.

Whether Mr. Harrison attends tomorrow’s debate is his decision, not mine. I will be there. 7pm in Spartanburg. #CantWait #SCSen pic.twitter.com/IZjJDEQqYJ

Why won't you take the test, Lindsey? https://t.co/dEVXUuBWqA

I’m not sure how persuasive Graham’s reasoning is there that because millions of South Carolinians have to live with the risk of being infected with a deadly disease every day it would be elitist for Graham and Harrison to do what they can to mitigate the risk to themselves. He came back at Harrison again this afternoon:

Other than Mr. Harrison, is any other South Carolinian demanding every person they come in contact with be tested before they meet?

South Carolinians do not appreciate Harrison putting himself above others.

If Mr. Harrison is not able to interact with South Carolinians on the same terms they live their lives, he should not be their senator.

This is the second debate in a row where Harrison has made a big show of precautions against COVID. At the first one, he brought his own six-foot-high plexiglass divider and set it up between him and Graham to try to block any viral particles that might be coming his way from across the stage. Tonight he’s ready to walk altogether because Graham won’t get tested. The polls on the GOP’s handling of coronavirus must be abysmal even in solid-red South Carolina, especially in the aftermath of the outbreak at the White House. But I’d never have guessed that they might be so bad that Harrison would deem *skipping a debate* to be a political winner for him because of the attention his absence would call to Republicans’ problem with COVID.

Which leaves us with the question of why Graham won’t just get tested. A simple possibility: He thinks Harrison’s making an unforced error by threatening to skip the debate and wants to call his bluff to see if he really will boycott. That is, maybe Graham’s negative but agrees with the “nutty” interpretation of what Harrison’s doing.

There’s another possibility, of course.

Hmmm, strange. Someone might think he's trying not to take a COVID test before the Amy Coney Barrett hearing because he's worried it'll be positive. https://t.co/E4TNqpD7YX

A positive test for Graham would be all kinds of bad news. Most basically, it would implicate him in the Democratic narrative that Trump and congressional Republicans have been unforgivably reckless in not doing more to prevent the spread of the disease within their own ranks, which feeds into the broader narrative that the White House has never taken the threat from COVID seriously enough. In a race as tight as the one between Graham and Harrison, maybe that matters. Maybe it’s even decisive.

But Graham’s role in the Barrett process is a special risk. He’s the chairman of the Judiciary Committee, responsible for keeping the confirmation process moving so that a final vote can be held before the election. If he tests positive, he’ll have to quarantine. How that might slow down the process is unclear, but obviously it could potentially mean that Republicans won’t have the votes to advance Barrett’s nomination when the committee votes, as currently scheduled, on October 22. And of course it would force Graham to cancel tonight’s debate with Harrison and remain off the campaign trail for a spell in the home stretch towards Election Day.

If Graham were to test positive, try keep it a secret, and then go about attending to Senate and campaign business without telling anyone, any leak revealing that he had knowingly exposed others to the virus would end his political career. If instead he were to avoid being tested, he could go about that business and remain blissfully ignorant as to whether he’s infected and is infecting others. Willful blindness is inexcusable, but not quite as grotesque as being out and about while knowing that you’re positive.

So that’s where we are right now. Is Graham merely reckless in declining to be tested? Or has he actually received a positive test and is prepared to put Harrison at risk by sharing a stage with him rather than submit to a pre-debate test that would make his diagnosis public? I’m leaning towards “clever” on what Harrison is up to by threatening a boycott under those circumstances, but I’d also bet that he ends up dropping his bluff and debating Graham tonight regardless. He’ll make a point of noting Graham’s refusal to get tested during their back-and-forth. That’ll probably help him more than a boycott would.

I’ll leave you with this. Democrats had better hope Harrison pulls the upset next month because the Senate seat across the border that they thought was in their pocket may be slipping away…

MUST WATCH: Cal refused not ONCE, not TWICE, not THREE TIMES, but FOUR TIMES to answer how many affairs he’s had.

The 2nd #SCSen debate tonight has officially been scrapped hours before it was scheduled to begin after @harrisonjaime insisted that @LindseyGrahamSC get a coronavirus test and Graham refused.

It will be replaced by separate interviews hosted by WSPA.https://t.co/loH4MQQ1jG

I guess the next round of polls will answer the question of whether this was nutty or clever.