Report: Trump has mild symptoms, including a cough and fever 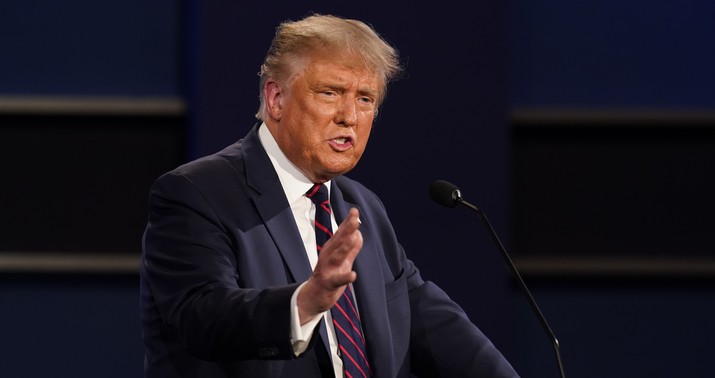 Hopefully it’s true that his case is mild, but Jonathan Karl’s right that no one should trust the White House to report accurately on Trump’s condition. For one thing, all available evidence suggests that they intended to cover up Hope Hicks’s infection even though that meant not telling people who’d been in contact with her that they were at risk. For another, Trump is obsessed with projecting strength. Unless he develops a case so bad that he needs to go to the hospital, “mild symptoms” will be the official talking point. He’s simply too manly to be weakened by COVID.

Hearing that Hicks is “quite sick” is unnerving, but she’s 31, a woman, and seemingly in good health. She’s in one of the least vulnerable cohorts of the entire population. As for Trump, a curious detail as of 3:15 p.m. ET is that he hasn’t tweeted once since his announcement last night that he’s infected. If his symptoms are mild, you would expect him to want to show the country that he’s taking this in stride by continuing his favorite pastime.

Gabriel Sherman reports that Hicks is annoyed with Trump in hindsight for not doing more to keep staff safe:

This morning the New York Times reported that Trump is exhibiting “coldlike symptoms.” Two Republicans in close contact with the White House told me that Trump’s symptoms have included a cough and fever. Melania is said to be asymptomatic. “They are worried about the president because of his age,” one of the sources said. Sources said Trump will likely want to be seen in public as soon as possible to blunt the narrative that he is sidelined by the virus he’s spent the last six months downplaying. “He’s going to want to get out there a lot sooner than people think,” the former official said. “But it will be hard to hide if he’s sick. Also, who will want to be in a room with him?”…

Meanwhile, Hicks has experienced more pronounced symptoms than the president. Two sources said she has had a high fever and a cough, with one source adding she lost her sense of smell. Hicks is said to be frustrated with Trump for taking such a cavalier approach to the virus. She was one of the few West Wing staffers to wear a mask in meetings, which her colleagues chided her for. “She was made fun of because she wore a mask,” a friend said. Sources told me Hicks is also upset that news coverage has made it appear that she gave Trump the virus, when in fact no one knows where he got it. “It’s so unfair she’s sort of being blamed,” the friend told me.

The detail about people making fun of her for wearing a mask rings true. Trump lightly mocked Biden at the debate for his habit of wearing masks, and staffers at Trump’s campaign headquarters told reporters months ago that they were pressured by colleagues not to take precautions against COVID. “You get made fun of, if you wear a mask,” said one person to Politico. “There’s social pressure not to do it.” If the culture is that toxic at campaign HQ, why wouldn’t it be similarly toxic inside the White House?

In fact, White House personnel — including medical personnel — still seem not to be taking this seriously enough. Pence’s official doctor issued this baffling statement a few hours ago:

Pence was seated right in front of COVID-positive Mike Lee at Saturday’s Supreme Court announcement in the Rose Garden, a possible superspreader event given the number of attendees who have turned up sick yesterday and today. What reason is there right now to rule out the possibility that the vice president is infected and still incubating the virus, with tomorrow’s test set to show that he has COVID too?

Why the hell would they continue to take the risk of further spread within the building by freeing Pence to roam around instead of having him isolate as a precaution?

Worse, who made the decision that Trump should proceed with his schedule as normal yesterday *after* they knew Hicks was positive? It’d be bad enough to have him out there meeting people after he’d been in close contact with someone who has the virus, but reportedly he was already showing symptoms of fatigue on Wednesday. No one made the connection between Hicks having COVID and the president seeming under the weather? Or did they make the connection and just decide to let him go out and risk infecting people in the hope/expectation that he wouldn’t have any symptoms himself and could keep campaigning?

One would think now might be the moment for them to revise their COVID protocols inside the White House, but according to the AP they’ve refused. Mask-wearing will remain “a personal choice,” not a mandate. And they’ll continue to use Abbott’s rapid tests even though they “only return positive results if individuals tested submit samples with large amounts of viral material.” That’s why there are so many false negatives with those tests — some people are positive but don’t yet have viral loads high enough to be measured. Said one epidemiologist to Stat about the White House’s “testing only” approach to containing the virus, “If you told me that somebody who was only testing, not wearing their mask, not distancing, and not taking every other precautionary measure tested positive, I would say: No sh*t, Sherlock.”

Sticking with a flawed, failed strategy is par for the course, though. One former White House official told Sherman that once Trump has recovered, “He could come out and say, ‘Look, I had COVID and it wasn’t that bad. It just shows that I’m strong and we should open up the country.’… He could make a mockery of it.” Unquestionably that’s what Trump will do, and it’ll only further alienate the 60 percent of the country that believes he’s never taken the pandemic seriously enough. Mocking the virus in February, before it’s killed anyone, would be stupid but understandable in a “people are often stupid” kind of way. Mocking it after 200,000 have died just because you managed to survive it while enjoying the world’s best medical care (and maybe some experimental treatments) would make you look like a psychopath, especially when your own young aide is “quite sick” from it right now. But Trump is going to be Trump. It’s too late to change now.